It’s been a tough year for investors. Practically no major asset class has seen price gains, at least not when measured in (ever stronger) US dollars. Many assets have fallen sharply. 2015 has certainly been a year to play it safe. But is there hope for better opportunities in 2016?

By the end of November there were very few asset classes that had shown a profit year-to-date (since the end of 2014). The following chart shows total returns, measured in US dollars, for 42 major types of financial investment. It includes major stock and bond indices, selected currency pairs, gold, silver and various commodities. 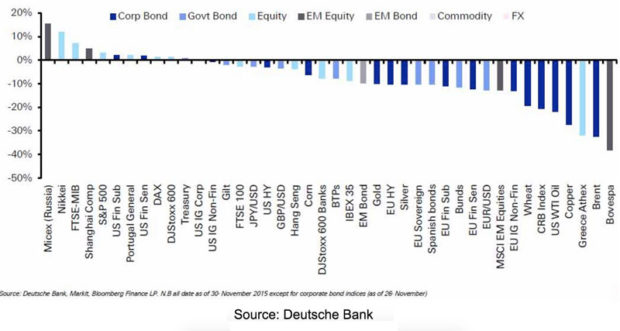 At that time the only two things with double digit returns were the Russian (MICEX) and Japanese (Nikkei) stock indices. There were also modest gains for Italian (FTSE-MIB) and Chinese (Shanghai Composite) indices.

Everything else was either within a hair’s breadth of tipping into loss with a single day’s price move, or firmly in the red. The biggest losses were in commodities (CRB index) – including oil (WTI or Brent), copper and wheat – and the Brazilian (BOVESPA) and Greek (Athex) stock indices.

Three quarters of the asset classes shown were in loss (31 out of 42). But that was then. Two weeks later things are even worse.

The CRB index of commodities is down a further 5%. This is largely because the price of oil has fallen a further 14%. Brent crude is now trading at US$38.40 per barrel. That’s similar to the panic low reached in the heat of the global financial crisis in early 2009. 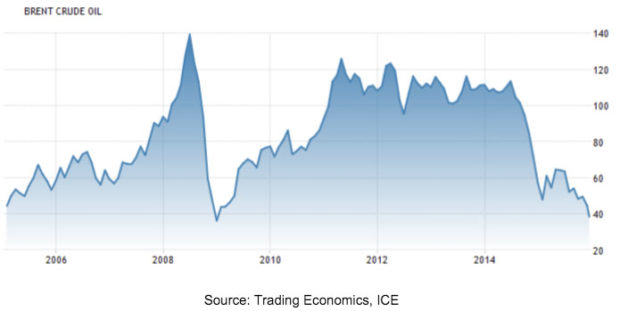 This has weighed on Russian stocks. The MSCI Russia index, which is measured in US dollars, is now flat for the year. Adding in dividends takes the total return to just 4%.

That’s better than the 1% all in return on the S&P 500 index of US stocks (which remain very expensive by any measure). But it’s hardly anything to write home about.

“Russian stocks….they remain extremely cheap, and are likely to do well in future – barring a major conflict with the West.”

Obviously nervousness about the situation in Syria and Iraq – including the shooting down of a Russian fighter jet by Turkey – hasn’t helped short term sentiment towards Russian stocks. But they remain extremely cheap, and are likely to do well in future – barring a major conflict with the West.

With Russian stocks stepping back Japan has taken the lead – at least among major markets – returning 8% year-to-date including dividends. But it’s nowhere near to the best performing stock market in the world in 2015. That honour goes to Jamaica.

The MSCI Jamaica index has returned 75% year-to-date, including dividends and measured in US dollars. But if you’d wanted to invest you’d have needed a local brokerage account. I’ve never come across an international broker that offers trading of Jamaican stocks.

Here’s a chart of the top five MSCI country indices. Note that in the case of both Belgium and Denmark half the index is just one company.

So that’s pretty much the only winners. At the other end of the scale there’s certainly no shortage of markets that were in the red during 2015. In fact there are dozens of them.

The absolute worst performer was our old friend Greece, which has lost 63%, measured in US dollars. It may be out of the headlines at the moment, but the crisis continues.

The following chart shows the five worst performing emerging markets so far this year. Certain frontier markets (not shown) also did appallingly badly. For example Ukraine, Bulgaria, Zimbabwe and Kazakhstan were all down around 40%. Some developed markets also lost substantial amounts, typically in the 15% to 20% range. I’ve also included the MSCI World index of developed markets, and the MSCI Emerging Market and MSCI Frontier Market indices. 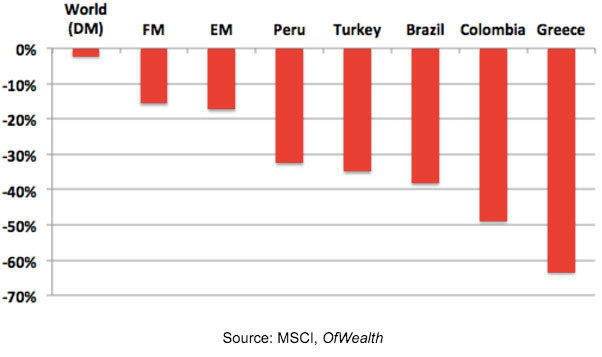 I warned against investing in Greece on 1st April. That was even though the market had already fallen 95% since its October 2007 high, and looked cheap by some measures (see here for more).

Greece is a country stuck in a grinding depression. It has a massive and growing government debt burden. Its banks are distressed. The country also remains trapped within the tight confines of the euro currency cell bloc.

Since the April article the MSCI Greece index is down another 49% from its level at the end of March. Overall it’s down 98% since October 2007.

As I said at the time: “Just because something has already fallen by 95% doesn’t mean the remaining price can’t still be cut in half”. I also said “…this market could easily fall another 30-60% from its current level, when measured in US dollars”. As it turns out that’s exactly what’s happened.

It’s still hobbled by the twin burdens of its debts and the euro currency.

It’s still too early to say that Greece has turned the corner. It’s still hobbled by the twin burdens of its debts and the euro currency. But with the price-to-book ratio now below 0.5 at the end of November – which is to say half of liquidation value – it’s certainly a market to keep an eye on as we roll into 2016.

After the most recent falls Greek stocks really do look cheap. But that doesn’t mean there will be a massive corporate profit or price recovery any time soon. In any case, for now stock prices keep falling.

Colombia was the second worst performer after Greece. I wrote about how collapsing Colombia could spell opportunity on 15th March. In that instance I said “It looks like the collapse of Colombia’s stock market isn’t over just yet. But it’s definitely a place to keep an eye on.”

Since then the Global X MSCI Colombia ETF (NYSE:GXG) is down a further 34%, with price of US$6.87 at the time of writing. So it was the right move not to pile in as prices were still in free fall. The oil price has dropped further and the currency – the Colombian peso – has fallen another 19% against the US dollar.

With a price-to-book ratio of just 0.7 GXG looks cheap. But until we see a turnaround in the beaten up oil market I don’t expect Colombian stocks to recover.

The flip side to all these losers has been the strong US dollar, which is used as the unit of account. We could measure relative performance across asset classes using any currency, just so long as it’s the same one used in all cases. The idea is to compare apples to apples.

The US dollar is used because its value is the most easily recognised around the world. Its prominence will erode over time – helped along by US government abuse of the dollar privilege – but it will be a multi decade process (see here for more).

Today most people know roughly what US$100 will buy. But, outside their country of issue, how many people know the value of 100 Indian rupees, or Chinese renminbi yuan, or Brazilian reais, or Indonesian rupiah? (Respective answers in US dollars: $1.49; $15.50; $25.71; 0.7 cents.) So we stick with US dollars to keep things easy.

The following 20 year chart shows the US dollar against the 26 currencies of the USA’s main trading partners, weighted for trade flows (imports and exports). 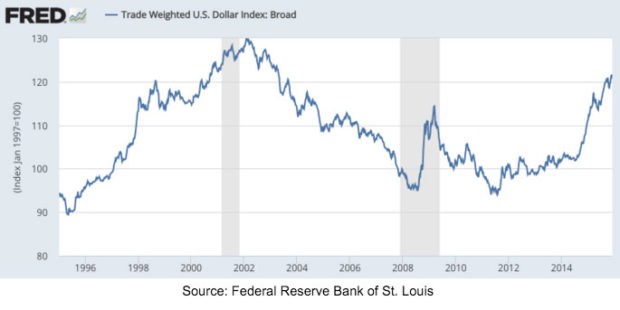 You can see it’s now above levels last seen in 2000. Just like the late 1990s, the US dollar is strong, many tech stocks have bubbly valuations and commodities are weak (see here for more on similarities to the late 1990s).

The dollar’s strength is linked to the expectation of a new cycle of rising US interest rates. As rates rise they encourage speculators to hold that currency, for the extra interest income.

But it’s also a sign of fear of everything else. The US dollar remains a safe haven, at least in the eyes of portfolio managers. But its strength is a drag on US corporate profits earned outside the US. This helps to explain why the already expensive US stock market has gone nowhere this year (see the US stock market’s seven deadly sins).

Given the complete collapse of commodities prices and the strong US dollar it’s perhaps a surprise that the dollar gold price has held up so well. It’s down 11% year-to-date, which isn’t great but also isn’t bad given the environment.

“…fund managers have to sell commodities across the index to fund cash redemptions, including gold.”

When general commodity prices are crushed people pull money from commodity index funds. This means the fund managers have to sell commodities across the index to fund cash redemptions, including gold. That’s a large part of the reason why gold fell pretty hard during the 2008 financial crisis, despite being a refuge from financial distress (not a liability of a financial institution or government).

The recent relative stability in the gold price suggests to me that there is underlying strength in gold demand. That will eventually show up in a new bull market. But for now there’s not a lot happening.

That’s a quick rundown of what happened in 2015. Part II will take a look at the prospects for 2016. All these big price falls have opened up some interesting opportunities. That’s great news for contrarian value investors.