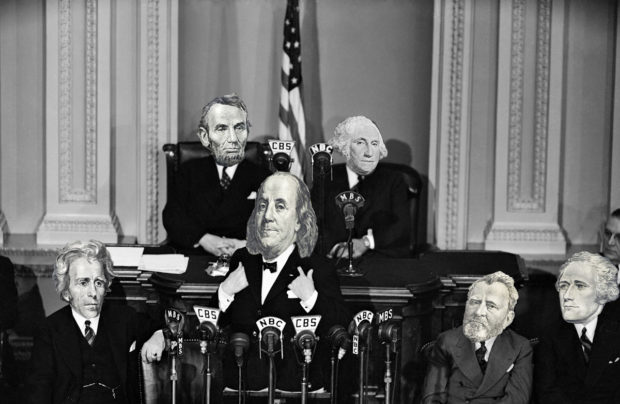 All eyes are focused on the US midterm elections today. In this era, where politics has descended to the level of mass entertainment, there’s already too much speculation about the potential outcome. So I’ll reserve any comment until the results are in (which they may be by the time you read this).

Instead, I’ll share an interesting (but unrelated) chart that I came across recently. It shows the estimated growth rates of the human workforce in the future for various places. 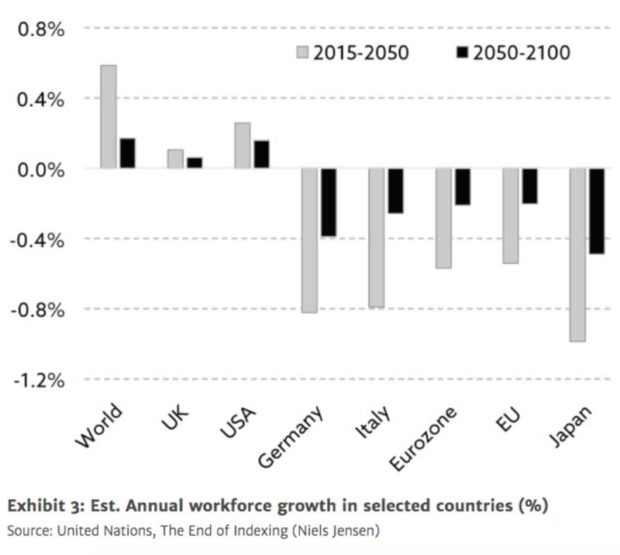 The fact that workforces are shrinking in Europe and Japan isn’t exactly news. But it’s always worth keeping the big trends at the forefront of our minds, lest they get drowned out by the daily information blitz (such as election speculation). Incidentally, China isn’t on the chart but faces a similar issue.

Many people are concerned about job automation leaving vast swathes of people in the “unemployable” category (or at least, uneconomic at the statutory minimum wage level). But perhaps, and subject to the pace of changes, we may need more machines, as all of their jobs can no longer be done by humans. Automation may, in fact, be economic salvation.

Back in the present, yesterday saw the imposition, once more, of US sanctions on Iran. The EU isn’t keen to play along. Other powerful countries, such as China and Russia, will simply ignore the US and keep buying Iranian oil (whether or not the US decides to declare them “exempt”).

Oil prices remain sharply up since the start of the year, but well below their early-October peak. I’ll leave it to others, better qualified than myself, to guess where oil prices go next.

Meanwhile, stocks seem to have settled down following October’s sell-off. At least for now.

Turning to bonds, the yield on 10-year US treasury bonds continues to creak higher, now at 3.2%. It’s worth remembering that yields bottomed below 1.4% in July 2016, so are now up over 1.8 percentage points from their extreme lows.

(The same can’t be said of their European or Japanese equivalents. Although it’s interesting to note that 10-year government yields in Italy are similar to US ones. Go figure.)

Yields on US Treasury Inflation Protected Securities (TIPS) – which show how much new investors will receive above inflation – are now in the 1.1% (5 year) to 1.3% (30 year) range.

This leaves them well below the typical 1.5% to 2.5% range in the years running up to the global financial crisis. But, at least they’re firmly positive – unlike in 2012 and 2013. At this rate, bond yields might even get back to “normal” within our lifetimes (okay, a year or two).

So far, 2018 has proved to be a tricky year for investors. There have been no havens of profitable tranquility, at least in terms of the major asset classes of investments (some specific investments, such as selected individual stocks, have done well, as always). In broad terms, the best strategy has been to hold a big allocation in US dollar bank deposits (“cash”).

My recommended asset allocation – which is unchanged since August 2017 – still includes 35% in cash. Overall, my aim has been to ride out any market situation in a world full of asset bubbles (a lot of stocks, almost all bonds, etc.). The aim is to manage risk while still leaving room for profit.

If stocks go up, there are some stocks. If stocks crash, there are plenty of other holdings. In the latter scenario, I’d expect the modest allocation to treasuries to provide a hedge. The cash “ammo” is there for when stock bargains are more widespread (although there are already many more than a couple of years ago). I may tweak these recommendations before the end of the year, but the changes are unlikely to be dramatic.

Even US stocks, after the initial euphoria of US corporate tax cuts, have given back most of their early gains this year. That’s as US trade policy has thrown various spanners in the commercial works. (There are undoubtedly other factors. But trade rhetoric and policy actions seem to be the main source of uncertainty.) 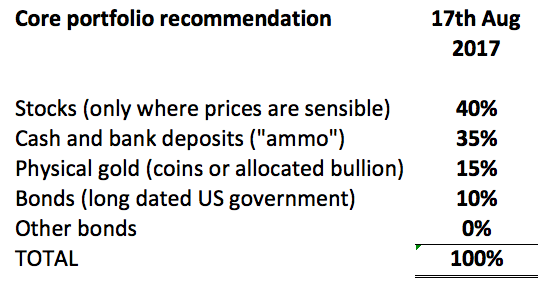 The year of the dollar

So let’s look at how various things have done. I’ll use the following to give a snapshot of 2018 (all are priced in US dollars, for comparability):

The following chart shows how they’ve performed in 2018:

Bottom of the pile are the emerging market stocks, down 15%, but European stocks are also down 11% (in US dollar terms). Treasuries and gold have also lost money.

In short, it’s been a tough market in which to maintain a successfully diversified portfolio. Even investors with a purely US domestic focus, and a portfolio that’s split between stocks and bonds, are likely to have seen red ink on their brokerage statements.

Since all the above investments are priced in US dollars, we need to scrutinise the dollar itself. The dollar has surged again this year, as the Federal Reserve has teased interest rates higher….meaning progressively further away from their previous emergency lows. The broad trade-weighted dollar index is up nearly 8% since the start of the year, and is back to its late 2016 / early 2017 peak.

Looking at some of the major currency pairs against the dollar, the euro is down 5%, the British pound is down 4%, the Chinese renminbi yuan is down 6% and the Japanese yen is more or less flat.

So far at least, 2018 has been the year of the dollar. With hindsight, most investors will have found it hard to beat dollar bank deposits. Note: this is not the same as saying investors should have entered the year holding nothing but cash. Things could have turned out very differently for each asset class (better or worse).

But it does justify a conservative portfolio allocation, in the face of significant, multiple uncertainties (economic, political, financial), and after many years of emergency monetary policy (ultra-low rates and quantitative easing). My recommendation is to maintain such an allocation for now.

In the meantime, investors should continue to search for the bargains that already exist today…many of which didn’t exist earlier in the year. (Or you can let me do it for you. See here.) Investments that are bought well will always have a much higher chance of profit for the patient investor, whatever direction prices decide to march in the short term.

That’s investing in a nutshell…or, at least, the only way that I believe that private investors can reliably expect to come out on top. Be prudent. Buy well. Be patient.