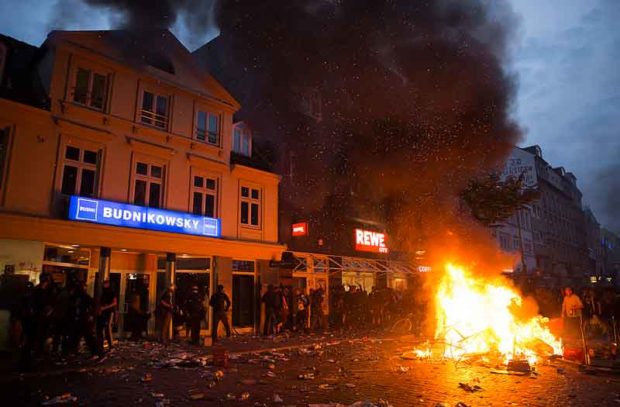 Stocks jumped on Monday, as the US market reopened for business after the Thanksgiving holiday. Today, they’re having doubts again.

The big news today is that US President Donald Trump may put 25% import tariffs on all cars shipped to the US, not just the Chinese ones (with exemptions for those made in Canada and Mexico). This is in an environment where General Motors (NYSE:GM) recently announced that it’s closing eight factories (of which, five in the US) and cutting 14,000 jobs.

Trump isn’t happy with GM. The company’s announcement runs against the narrative of how Trump’s trade policy is meant to create American car jobs. Unfortunately, his earlier slapping of tariffs on steel imports is reckoned to have added $1 billion a year to GM’s annual costs.

That’s been a hit to pre-tax profits of about 8%. Combined with poor sales of certain models (sedans) due to shifting consumer tastes, this has put pressure on GM to trim its operations.

Meanwhile, tensions have mounted again between Russia and Ukraine. On Sunday, three Ukrainian ships were boarded and captured by Russian forces. They were sailing through Russian waters (or, at least, waters claimed by Russia) near to the Crimean peninsula in the Sea of Azov.

Apparently, Ukrainian ships often pass through this area. But these ships – which were two gunboats and a tug boat – didn’t have permission up front. In reaction, the Ukrainian government has declared martial law in border regions for a period of 30 days, claiming there’s a risk of Russian invasion. This permits them to mobilise military units, “regulate” the media (presumably, censor it), and restrict public rallies.

Ukrainian martial law sounds like an overreaction that escalates an already-tense situation. The US and EU appear to be trying to calm things down, and encourage dialogue.

Elsewhere in Europe, UK Prime Minister Theresa May’s draft Brexit deal was approved by the EU. Now she has the harder task of getting it through a fractious British Parliament. All bets are off as to what happens next. But, if it is approved, UK markets should rally strongly. (Incidentally, Trump said it was a bad deal that favours the EU. He’s probably right.)

In France, central Paris has experienced protests and riots. This was supposedly linked to a tax increase on diesel. But, for things to get so serious, there must be much deeper malaise. French President Macron, who was supposed to be France’s great new hope, is now deeply unpopular.

Latest polls suggest only 26% of the French have a favourable view of him. That’s even lower than his two predecessors, at this stage in their presidencies (conservative Sarkozy had 29%, socialist Hollande had 48%). Waiting in the wings, Marine Le Pen’s nationalists rebranded themselves earlier in the year. They’re no longer the “Front National” (National Front). They’re now known as the “Rassemblement National” (National Rally).

The G20 comes to town

With all of this happening in the background, leaders of most of the world (by population and economy) will descend on Buenos Aires later this week. Yes, it’s G20 summit time, and Argentina is this year’s chair.

The city is about to go into lock down, in preparation for the inevitable protests and riots (as happened in Hamburg, Germany the last time). The G20 is a magnet for the global rent-a-mob. A sort of mardi gras for malcontents.

Some of the G20 attendees are pretty obvious. Leaders from the US, China, India, Russia, Germany, France, the UK, Brazil, Mexico, Italy, Australia. But some are more easily forgotten by all but the most-dedicated policy wonks. Those include Argentina itself, Turkey, Saudi Arabia, Indonesia and South Africa.

This isn’t a democratic club, nor a capitalist one, nor a developed country one, nor a “Western” one. It’s just a fairly reasonable selection of a minority of countries with majority influence in the world, one way or another (even Argentina produces a lot of food).

Unfortunately, these world leaders bring huge delegations with them. At the weekend, a non-US diplomat told me that the US will send nearly 1,000 people. Overall, something like 15,000 politicos, bag carriers and security types will take over all the big hotels in the centre of town (one hotel per country). Many are already here, preparing the ground for their glorious leaders.

The meeting will take place on Friday and Saturday, near the south bank of the River Plate. It’s less than 3 miles (4.9 kilometres) from where I live. A huge slab of the surrounding area will be within a tight security zone, with three rings of security. The outer edge is only about 1 mile (1.6 kilometres) away from here.

Fortunately, this zone overlaps with few residential areas, being full of public parks and an airport (shortly to be closed to all non-official flights). But one big slum – the Villa 31 – is inside the security area. It will probably be the safest it’s been in decades.

Argentina is contributing around 22,000 officers from the police and gendarmaria (hardcore police). Foreign security agents, guarding their own delegations, are expected to number 3,500 more.

Over the weekend, there will be virtually no trains in the city – overground or underground. Affected bus routes will be diverted. Two airports will be closed. Driving is expected to be a mess, since some major avenues will be blocked.

Whenever Trump is anywhere nearby, there will also be no cellphone signal (as happened when Barack Obama visited in 2016). Apparently, cellphones can be used to remotely trigger bombs over short distances. Whether other countries do this blocking, I don’t know. (I live two blocks from the German embassy, so if Angela Merkel pops over for tea then I’ll probably know about it.)

Trump has a key meeting scheduled with China’s Xi Jinping, where trade policy is likely to top the agenda. He’s also expected to sit down with Russia’s Vladimir Putin. There are many other bilateral meetings set up between the various leaders. At the summit itself, tensions are likely to be substantial between some countries (e.g. Turkey / Saudi Arabia over the journalist murder, EU / Italy over the country’s budget).

Overall, it’s going to be one hell of a bun fight between bureaucrats. The actual end result – of the summit itself – is likely to be a lukewarm statement of mutually shared intent. Which could be tricky in this climate. “We all agree to live on the same planet for as long as possible, blah, blah, blah.”

Still, I’d prefer that these people are talking to each other than not. Perhaps sips of Argentine Malbec, accompanied with tango music, will help to smooth things over.

As for me? I’m ignoring government advice to leave the city for the weekend. Instead, I’m stocking up on cash and food and preparing to enjoy the ride. More to come…

ArgentinaGovernmentLatin America
Previous ArticleIs the booming art market the “canary in the coal mine”Next ArticleIs there an “everything bubble”?