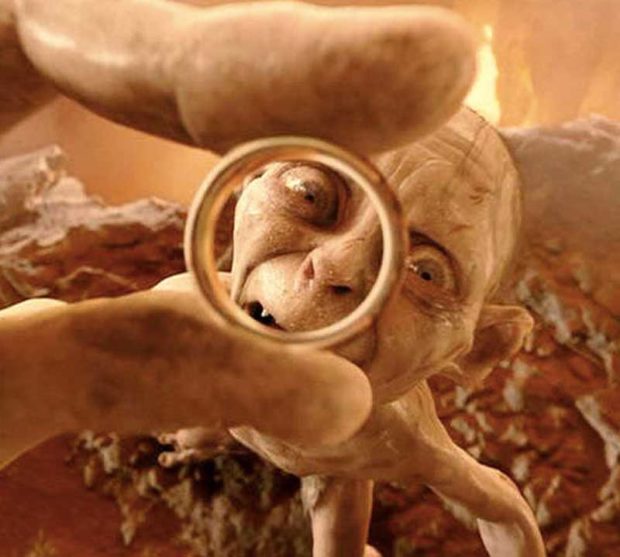 Gold owners have been having a challenging year. The combination of a strong US dollar and weaker physical demand in Asia has meant a falling gold price, at least when measured in US dollars.

When prices are falling many start to question the rationale for owning gold. But here at OfWealth we have no doubts. Every investor should own at least some physical gold – at least 5% of their wealth and up to 20%. There are at least three good reasons and one more frivolous one.

Gold is a hedge against cash if inflation ticks up again. It’s insurance against financial meltdown in an over leveraged world. And, in the long run at least, it’s likely to be bid up by ever wealthier people in large and growing economies like China and India (and maybe Africa down the line).

Oh, and it’s shiny and weighty. There’s something very satisfying about holding a one ounce gold coin or 100 gramme bar in the cup of your hand and watching it glint as you move it around. Golum had at least one thing right. Or perhaps he was a victim of gold’s allure.

That said there have been fewer would-be Golums around in recent months. According to the latest figures from the World Gold Council, global physical gold demand fell 12% year-on-year in the second quarter of 2015, and 6% in the first half.

The biggest factor was a 25% drop in Indian consumer demand, mainly for jewellery. The World Gold Council put this down to heavy rainfall in the first quarter, which damaged crops and hence hit rural incomes hard. Over half of Indian gold demand comes from the rural population, who use it as a way to save and protect wealth, or to make gifts such as wedding presents.

Previously I’ve never thought of gold as a commodity that’s impacted by unpredictable, short term weather patterns. I thought that was more the domain of highly volatile soft commodities like soybeans or wheat.

Gold’s short term moves were understood to be more a function of the financial climate, in particular speculative activity in financial derivatives markets. I’ve learnt something new.

But the vagaries of the weather also have a fleeting impact. Presumably a good year for Indian crops would drive a spike in rural incomes and gold demand. It’s all swings and roundabouts. What counts is the long term.

In today’s guest essay our friend Bill Bonner takes an original – some might say quirky – look at the value of gold. He’s been thinking about gold for at least twice as long as I have – over many decades – so I hope you enjoy his thoughts.

How much is gold really worth?

Is gold reasonably priced? Too high? Too low?
You decide…

“A Car for the Great Multitude”

In the museum in the Old Rhinebeck Aerodrome in upstate New York is an early automobile.
We didn’t get a chance to study it in detail. But the collection includes a Sears Motor Buggy built in about 1910. It was on sale then for just $395.
It is a simple vehicle – a real “horseless carriage.” It was the new technology of the time, and more promising than probably almost anyone realized. But the motor was finicky. The ride was bumpy. And it was very noisy, more of a novelty than a serious way to get around.
Still, Sears’ technology was “cutting edge.” And he was turning out hundreds of these new cars.
But more edges were being cut in Detroit.
Ransom E. Olds, the founder of Oldsmobile, had already perfected the assembly line. Henry Ford was not far behind him, taking production to a new level of efficiency and output. Ford:

It will be constructed of the best materials, by the best men to be hired, after the simplest designs that modern engineering can devise.

But it will be so low in price that no man making a good salary will be unable to own one—and enjoy with his family the blessings of hours of pleasure in God’s great open spaces.”

By 1910, half of the automobiles in the U.S. were Henry Ford’s Model T’s. He priced them low and made his money on volume.

Ford sold his Model T’s for just $260 – enough to make the Ford family rich and make the Ford Motor Company one of the world’s leading enterprises.

But how much was that in today’s money?

It depends on how you adjust for inflation, which is far from an exact science.

Typically, we see estimates that the dollar has lost 95% to 98% of its purchasing power over the last 100 years. Although there are only three percentage points in the difference between the two numbers, they have a big effect on the calculation.

A loss of 95% implies that today’s dollar only has 5% of the purchasing power it had 100 years ago.

A loss of 95% implies that today’s dollar only has 5% of the purchasing power it had 100 years ago.

But the price of Ford’s current everyman car, the Fusion S, is about $22,000 today. That’s 85 times more expensive than the Model T was in dollar terms.

Meanwhile, also measured in dollars, gold is worth 58 times more than what it was in 1915.

Monday was the 101st anniversary of Ford’s famous announcement: He would pay his workers a shocking $5 a day.

With gold then priced at $19 per ounce, that was roughly an ounce of gold for every four days of work.

An eight-hour day at this rate would earn you $654, including benefits. Four days at this pace gives the worker $2,616 – more than enough for two ounces of gold today.

So, in gold terms, the autoworker today earns about twice as much as he did 100 years ago, which doesn’t seem like much of an increase for an entire century.

Either the price of gold is too high… or too low. How’s that for a helpful analysis?

But had gold kept up with UAW hourly wages, it would be priced at about $2,485 today.

And at today’s gold price, it takes 20 ounces to buy Ford’s cheapest car.

That is six ounces more than it cost to buy the Model T.

Is gold too high? Too low? Who knows? But we wouldn’t worry about it.

If you enjoyed Bill’s thoughts on gold you can find more of his daily musings at Bill Bonner’s diary.