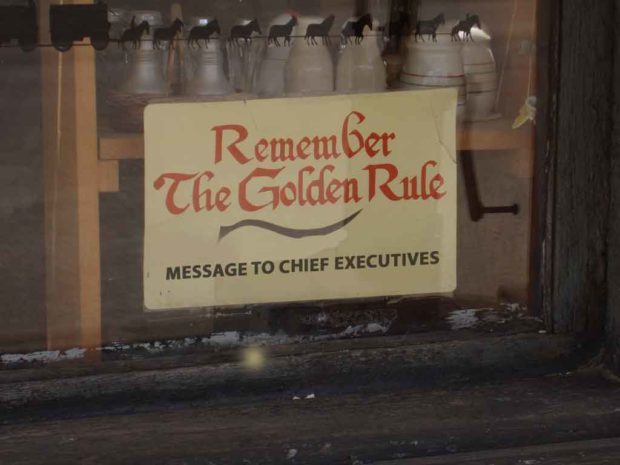 Companies in the US stock market distribute a lot more cash to shareholders than in other regions, especially via share buybacks. Big cash distributions to shareholders sound like a good thing at first sight. Until you discover that US companies routinely break the “golden rule” of buybacks. Investors suffer as a result, even though it’s well hidden in plain sight.

A share buyback is when a company uses corporate cash to buy its own stock, withdrawing shares from the market. This means that the income earning assets and company profits are now shared between the smaller number of traded shares that remain.

In my last article I looked at how US listed companies spend far more on stock buybacks than companies in other regions (for more see here ).

Sounds good right? Surely this means US stocks are more likely to go up in price than other markets? High levels of buybacks must be a good thing for investors?

That’s because when it comes to whether a buyback is a good thing or not the correct answer is “it depends”. As stated by investment bank Credit Suisse, in a research report from October 2016, the “golden rule” of share buybacks is:

“A company should repurchase its shares only when its stock is trading below its expected value and when no better investment opportunities are available.”

There’s a simple idea behind this. It’s that company managers should always invest corporate cash in the best ways they can find, with the aim of making the shares more valuable over time.

Buybacks are just one alternative use of that cash. Sometimes they make sense, other times they don’t.

All stocks have a fair value, or “expected value” as stated in the golden rule. That fair value is what investors should pay to buy the stock if they want a certain level of return in future. It’s hard to assess accurately, but it exists nonetheless.

A similar thing is true of companies that do stock buybacks. If they overpay in the market they’ll get a poor result. If they buy cheaply they’ll get a good result.

The main alternative to a stock buyback, once management has eliminated all other investment alternatives and decided there’s excess cash, is to pay a higher dividend to all shareholders.

In the case of cash dividends, all shareholders are treated equally (barring different income tax rates for different investors). If you’ve got one share, you’ll get one dividend payment. Whatever the price of the stock there are no relative winners and losers.

Buybacks are more complicated. If done at fair value then there are no winners or losers, just the same as dividends. Think of it as the company paying a dollar to get a dollar.

If done when the stock is overpriced in the market then cash is wasted and value is destroyed for remaining shareholders. Think of it as paying, say, $1.50 to buy a dollar. Only the stupid buyer would think that’s a good deal (or perhaps money launderers).

On the other hand, if a buyback is done when the stock is trading cheaply then it’s an excellent use of cash. Remaining shareholders – which are, after all, the only ones that should matter to management – gain value per share. They get a dollar of value but only pay, say, 75 cents to get it.

(For those interested in more detail I’ve put some worked examples at the end of this article. It’s for a company worth $200,000 at fair value, that pays out $9,000 of cash as either a dividend or via a buyback and under different stock price scenarios.)

Now let’s get to the problem. Taken as a whole, big US corporations consistently do the most stock buybacks at the worst possible times.

The following chart shows the amount spent on buybacks compared with the S&P 500 index of US stocks. 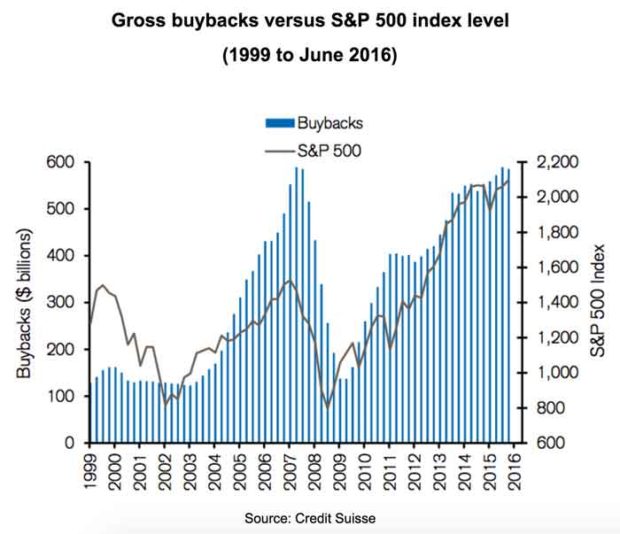 You can clearly see that listed US companies spend the most cash on buying their own stock when shares prices are highest. Previous high points in buybacks coincided with market peaks (bubbles actually) in 1999, 2007 and…well…now.

This is a sure way to destroy value for ongoing shareholders. Right now, with a 3% buyback yield and stocks overpriced by at least 50%, I reckon that buybacks are destroying value in the S&P 500 to the tune of about 1.5% a year (give or take).

The question is: why are corporations engaged in this value destructive behaviour for their owners? With stocks so pricey, it would be much better to pay out excess cash in the form of dividends. So why don’t they?

It’s all to do with something known as “stock-based compensation”. This is where companies hand out stock and stock options to management and employees, instead of paying them only in cash.

Handing out stock wouldn’t be so bad, just so long as it’s clearly reported and there’s a well-defined company policy about how much can happen each year. Also, with stock there is no built-in bias towards buybacks instead of dividend payments.

But stock options are worse in my view, and mess up the incentives. Options allow managers to buy shares at a fixed price at some point in the future. Owners of options don’t receive dividends, they only profit if the share price goes up.

So there’s an extra benefit for owners of options, including the CEOs that make the decisions, of doing a stock buyback instead of paying a dividend. That’s because buybacks of a given size result in a higher share price than equivalent dividend payments. (Same cash out of the company, but the remaining assets and future earning power of the company are now split between fewer shares. See examples at the end.)

Let’s say a stock is worth $100 at fair value but is trading at $150 in a bubbly market. At the same time a stock option – handed out a few years before – allows the CEO to buy stock for $75.

If the CEO decides to exercise his option, which he surely will for his own advantage, the company will have to waste money to buy the overpriced stock at $150. This is just so it can hand it to the CEO for $75, losing $75 per share transferred. That’s 50% of the money spent.

Oh, and while we’re at it’s worth noting that most of the share price rise may have had nothing to do with the CEO’s past efforts to grow the company. It could be simply due to a generally overpriced stock market, as in the US right now. The rising tide has lifted all boats, even if some are poorly maintained.

Over the past five years the S&P 500 index has had an average gross buyback yield of 3% (and still has). The problem is that over the same period those companies have also issued a lot of new stock, on average adding 2.5% a year to the number of shares traded.

In other words, most of the supposedly tasty buyback yield is offset by new stock issuance. The net reduction in share count has only been 0.5% a year over the past five years, as dilution has offset buybacks.

Some of that offset is genuine capital raising, issuing stock to bring in new cash for investment (or to be wasted on overpriced corporate acquisitions, which also peak in volume at the top of the market…but that’s another story). However, much of it is simply stock that’s handed out as pay to corporate insiders.

It’s difficult to get precise figures. But my analysis suggests that capital raising for cash currently runs to about 1% a year. That implies the part linked to stock-based compensation is about 1.5% a year.

Put this together and shareholders of US stocks are losing around 3% a year from this value destructive behaviour, split roughly evenly between the linked issues of overpaying for large buybacks and the uniquely high levels of stock-based compensation in the US.

That hidden loss, buried in reporting footnotes and financial engineering, is instead of the supposed 3% gain that investors think they’re getting from the high gross buyback yield.

I’ve noted before how real (above inflation) returns on US stocks have collapsed (see my last article). That’s once you exclude changes to the P/E multiple (which can’t keep rising forever).

In other words, around 3% a year of investor return is “missing in action”. I believe the destructive behaviour that I’ve explained, where cash is being wasted and value transferred to insiders, is a major contributor to the problem.

Buybacks took off in the US in 1982 due to a change in regulations that made them easier. Around the same time the amount of stock-based compensation started taking off too. A generation later we’ve reached the point where both have a meaningfully negative impact for investors.

The irony is that most investors tend to think the high buyback yield of US stocks is a good thing, being extra money distributed to shareholders. But when you dig deeper you realise the opposite is true.

In short, when it comes to US stocks, the desirable process of value creation for outside owners has often been replaced by undesirable value extraction by insiders. America Inc. keeps on breaking the golden rule of stock buybacks, and overpaying.

This corrosive corporate behaviour is yet another reason – on top of bubbly market prices – why future returns on US stocks are likely to be poor. For now at least, the best stock market opportunities are mostly found elsewhere in the world.

Examples of how dividends and buybacks affect shareholder outcomes under different scenarios: 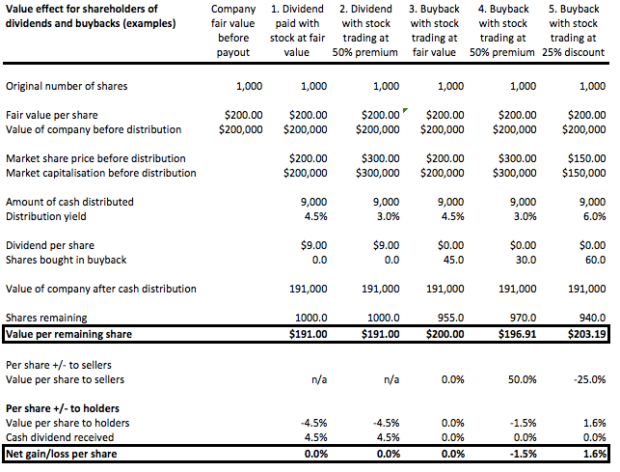