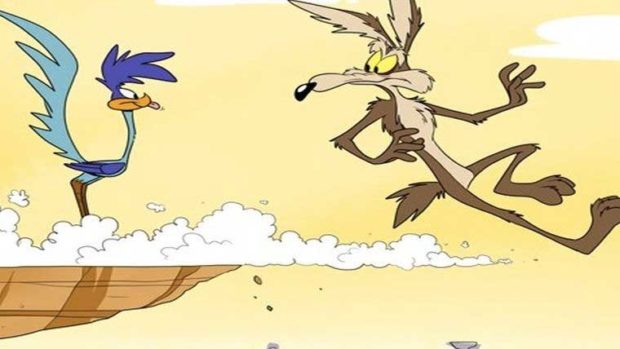 A lot of stock investors are happy to own index funds. Most of the time this will work out well in the long run. But I’ve discovered something deeply worrying when it comes to US stocks. Put simply, corporate America is destroying shareholder value on a massive scale. Yet no one seems to have noticed this huge problem. However, in the end it will be very negative for US stocks.

Let’s cut to the chase. Back in June I wrote about “The lost decade for US profits”. In there I looked at where stock investor profits had come from in the past, both over the ultra long term, and in the last decade.

My shocking discovery was that real (above inflation) growth of earnings per share (EPS) for companies in the S&P 500 index of US stocks had been incredibly weak over the past decade. I mean, way below historical levels.

Newly discovered information has let me dig even further into what’s going on. The findings are not pretty. They highlight how “America Inc.” is doing a terrible job for its existing shareholders, at least in aggregate. It’s a gigantic collective management failure.

Value is being voluntarily destroyed on a scale never seen before. And the weirdest part is that no one seems to have noticed!

To explain, first we need to take a look at the (in)famous concept of the stock buyback. (See also: “The S&P 500 is being looted by management.”)

US rules on buybacks were changed in 1982 to allow more of them. Before then they only made up 5-10% of total cash distributions to shareholders, which include dividends as well.

Nowadays buybacks are typically around 60% of the total cash paid out by companies in the S&P 500 index. To understand the US stock market you need to understand buybacks in a way that’s not true anywhere else in the world.

The following chart shows how the split has changed since 1977 – with dividends in blue and buybacks in red (I know it’s small, but it’s just the trend that matters).

You can see that in the next chart.

The distribution yield fell below 3% in the late 1990s, when the market was in a bubble. And it spiked in 2008, just as the financial crisis was gathering steam. (I don’t know why that was, but possible contenders are the commodities bubble, or one or two huge tech firms starting to make distributions, or big payouts from the banks before they got into trouble.)

The rest of the time, the total distribution yield – cash payouts from dividends and buybacks – has fallen mainly between 4% and 6%. In fact the average was 4.7% since 1977 and 5.1% in the past five years.

Now let’s get back to digging further into the sources of investor profits.

The first factor is the P/E change, which can be large over short periods but always tends to zero over the ultra long run. It’s also a market factor, meaning management has little influence over it most of the time.

Then there’s general price inflation. Again this is out of management hands, but in general it leads to rising EPS over time. It’s down to general economic and financial conditions, and government and central bank policy measures.

Next are the two kinds of cash distributions – dividends and buybacks. The size of these depends on management decisions about how to use cash.

Finally, once you’ve taken into account those other five factors, you’re left with what I’ve called underlying real EPS growth. This is how much the companies in the index have grown earnings per share (EPS), above general price inflation. In other words, it’s a measure on how well company managers are delivering value to their shareholders. 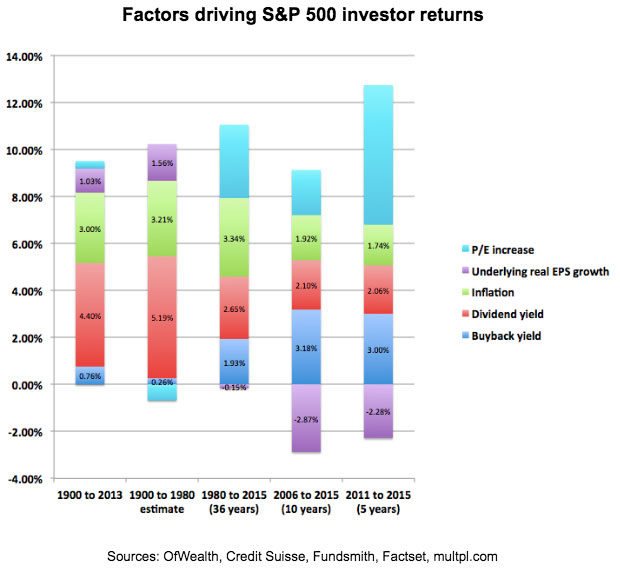 The chart above shows the results of my analysis of the S&P 500 for different periods. Focusing on the two columns on the right – which cover the past 10 years and 5 years – two things really stand out.

First, a large part of total return has come from P/E expansion, which can’t continue forever (if at all). It was 1.9% a year over 10 years, which includes the banking crisis, and a massive 5.9% a year over five years, which is just the recovery period (pumped up by printed money, known as quantitative easing, or QE).

Second, underlying real EPS growth has been strongly negative, whereas in the past it’s usually been strongly positive. This leaves a huge hole in US stock returns, especially if it continues.

Taken in aggregate, US managements simply haven’t delivered above inflation EPS growth to shareholders in recent years. In fact they’ve been destroying value fast over the past decade.

The next chart really simplifies things. It removes the factors that managers can’t control, which are general market valuations (P/Es) and price inflation. Then it aggregates buybacks and dividends into total distributions. What’s left are the two things that management can influence: cash distributions and underlying real EPS growth. 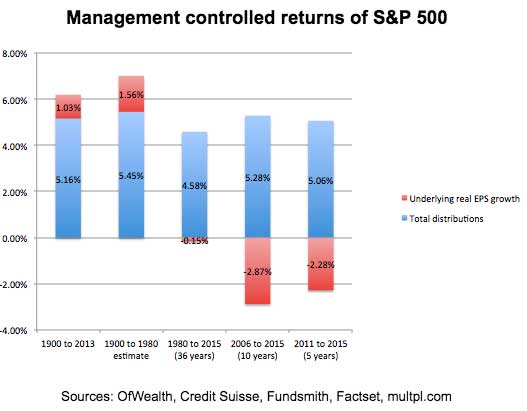 Underlying real EPS growth has gone strongly negative in recent years, whereas it used to be positive. Remember, this is excluding the effect of buybacks, which artificially pump up EPS, and excluding general price inflation as well. It’s the real value added by managers.

The net result – adding the blue and red together – is that the S&P 500’s managers have delivered only 2.4% a year to existing shareholders over the past 10 years, and 2.8% a year over the past five years. Before 1980 the equivalent was over 7%.

In other words we’re talking about a shortfall of well over 4% a year, when compared with historical levels. That’s a massive failure.

Cash distributions are still large, but real EPS growth has turned strongly negative. Something is going very wrong these days. But what?

For a start we can rule out falling net profit margins. These are actually slightly higher now than they were a decade ago (even with structurally lower profitability at the banks).

So we need to find a culprit. And I think I’ve unearthed it. Despite buying back an average of 3% of shares over the past five years, the total share count of the S&P 500 has fallen by less than 0.5% a year.

In other words, almost as fast as companies have been paying out cash to cancel stock, they’ve been issuing vast amounts of it to the opposite effect. In fact to the tune of of 2.5% a year of the value of the index over the past five years.

The questions are how has this stock been issued and why?

One likely cause is if companies have issued stock to pay for overpriced corporate acquisitions. But my own suspicion is that most of this comes from issuing stock to company insiders – meaning management and employees.

Most of those buybacks, that stock analysts tend to love, don’t really end up cancelling the stock. Instead the stocks are just transferred to managers when they exercise their executive stock options at a vastly discounted price. At the same time, many (even most) companies are probably overpaying for the stock in the first place, given the pricey US stock market.

So they’re buying high (in the market) and selling low (to corporate insiders). Hardly a recipe for success, at least for all the other poor shareholders. In fact, it’s guaranteed to snatch value away from existing shareholders.

Whatever the cause, here’s the bottom line: in recent years “America Inc.” has been doing a very poor job for its shareholders. Underlying real EPS growth has been strongly negative when it should be positive. Chairmen and CEOs aren’t doing their jobs properly (although they’ve probably been paid plenty in any case).

But taken in aggregate, this should give pause to anyone who owns a fund that owns an index of large US stocks, such as the S&P 500. There’s a big hole being dug in US stock returns, and I can’t see any reason why it’s likely to get filled back up anytime soon.

This is yet more reason to be wary of overpriced US stocks.

Twice a week we help thousands of subscribers who share these goals with our free publication, the OfWealth Investor Thought Club.