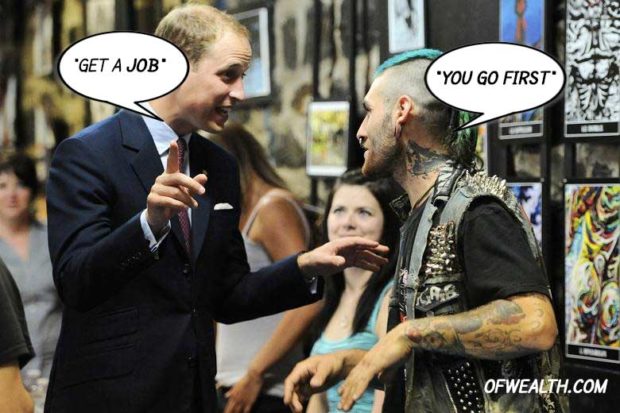 The term “Anglo Saxons” is often used to lump together the USA and United Kingdom. Indeed there are many similarities between those two countries, but also huge differences. One massive disparity is that fewer and fewer Americans are going to work. On the other hand, British employment has recovered to a level consistent with previous peaks over the past four decades. So why are Americans quitting while the British keep their noses to the grindstone?

It’s been said of Britain and America that they are “two nations divided by a common language”. And it’s correct to say that most people in both countries use one or other dialect of English as their main form of communication.

The USA is known as a country that favours free enterprise, or at least used to. The “American Dream” is that anyone can make it in life if they work hard enough.

Most continental Europeans see the British attitude to business and the economy as much closer to the USA than their own vision of how things should be done. Britain is often characterised as having one foot in the European Union and one foot in the USA.

This is probably true, even though there is no “British Dream” to give the illusion of mass social mobility. But both countries have large capital markets, advanced financial systems, like to go to war together, and are often the first port of call for their companies that want to expand overseas. Also both governments run massive budget and trade deficits.

Both economies suffered greatly following the banking crisis of 2008. And both engaged in massive bank bailouts and money printing schemes to stabilise financial markets. We’re told that both economies are now supposed to be recovering.

But a look at the employment picture shows a very, very different story in the two countries. Compare the following two employment charts.

The first comes from the Federal Reserve Bank of St. Louis, and shows what’s called the US “participation rate” for every month since 1948.

The second chart shows the quarterly UK “employment rate” since 1981, using data from the Office for National Statistics.

First off, let me be clear that these rates are calculated slightly differently, as I’ll explain in more detail below. The 63% US participation rate in April 2015 is not directly comparable to the 75% UK employment rate in first quarter 2015. We can’t say that 12% more British work than Americans.

But what we absolutely can compare is the trends of these lines since the start of the 1970s, and especially since 2007. And they are very, very different.

In the USA the participation rate rose steadily between January 1971 and March 2000 from 60% to 67%. In other words it peaked at the same time as the stock market technology bubble. Since then it’s been in almost constant decline, and is now just below 63%. That’s a level last seen in March 1978, or 37 years ago. In other words it’s at the lowest in a generation. And it’s happened under both Republican and Democrat governments.

On the other hand, the UK employment rate has been more volatile, but overall has held up over time. It started at 75% in 1971, rose a little into 1974, which was during a period of strong union movements. It then plunged to 68% by mid-1983, when Margaret Thatcher’s government was reforming the economy and unemployment went through the roof.

Employment then shot back up to 75% by 1990 as the reforms began to bear fruit, accompanied by a stock market and property boom. The bubble then burst, with the employment ratio falling to 70% by early 1993. That was followed by another employment boom, reaching a steady plateau between 2000 and 2007 just below 75%.

In short, US employment appears to have fallen since 2000, and especially since 2007. There was no recovery to speak after the dot com bubble burst, and there’s been no recovery since the banking crisis. The participation rate just keeps on heading down.

Whereas in the UK there have been many cycles. Most recently a lot of jobs were lost after the banking crisis, but now the employment rate is just as high as before that crisis hit.

On this basis, the UK has recovered well from the banking crisis but the USA is still weak, whatever other official data about GDP may say. This is strong evidence that the US “recovery” is a mirage.

But we have to be a little careful here. After all we’re dealing with official statistics, which can be slippery beasts to grapple with. And we’re also comparing two countries that use different methods for calculating their data.

In the interests of trying to work out what’s going on, your writer has done some grappling with the nature of these two beasts, to get to the bottom of the numbers. Without getting into too much detail let me explain the big differences between the US and UK numbers.

The UK “employment rate” is a little simpler. It’s just the number of employed people divided by the total population deemed to be of working age. That’s between 16 and 59 years old for women and 16 and 64 years old for men. (I’m not sure why British women can’t work just as long as British men, but that’s just the way the definition works.)

This means that the US participation rate will tend to be lower than the UK employment rate. That’s because a large part of the potential working population, under the US definition, is retirees who may have no intention of ever going back to work. In calculating the UK rate they are excluded.

In an ageing population, as more and more baby boomers move into retirement but stay in the statisticians’ group of potential workers, this will also have a gentle but ongoing downwards drag on the US participation rate.

UK employment fell sharply and then recovered. US participation has just kept on falling, with absolutely no bounce at any time.

But that’s over the long run. It still can’t account for the big divergence in employment patterns in the US and UK over the past eight years. UK employment fell sharply and then recovered. US participation has just kept on falling, with absolutely no bounce at any time.

We can speculate on why this might be. Perhaps many Americans are now so wealthy that they don’t need to work? Or are they voluntarily living more frugally, allowing husbands or wives to stay at home to concentrate on the family?

Or are vast numbers of young people staying in education for longer than before, instead of looking for jobs? Or is automation taking hold, meaning fewer and fewer humans are need in the workplace? (See here for more on automation.)

Perhaps. But, if so, why aren’t those things affecting the UK as well?

Isn’t a more plausible explanation that the US is now awash with a new underclass of long term unemployed? That lots of people simply can’t find jobs?

Isn’t a more plausible explanation that the US is now awash with a new underclass of long term unemployed? That lots of people simply can’t find jobs?

I suspect it’s a little of all these things. But given the relatively short time span of just a few years, and the huge trend divergence between these “Anglo Saxon” countries, I’d bet it’s mainly down to a lack of jobs in the US.

This is backed up by the number of Americans on the Supplemental Nutritional Assistance Program (SNAP), better known as “food stamps”. At the end of February there were 45.7 million people relying on this program to feed themselves and their families. That’s 1 in 7 of the population and is up from 26.3 million people in 2007.

Whatever the causes it seems pretty clear that more and more Americans are quitting the workplace, either voluntarily or involuntarily. This can’t be good for the economy (less money to be spent), or for social stability. Perhaps the recent riots in the city of Baltimore are just the latest manifestation of that trend.

In the meantime, the UK electorate has just surprised politicians and pollsters alike by voting for the first majority Conservative government since 1997. That’s the pro-business party, in case you didn’t know, also known as “the Tories”. No one expected this to happen.

The new government has already announced new policies to cut regulation of small businesses and further limit the power of unions to go on strike. In that kind of environment UK employment looks set to continue growing. In the meantime the US participation rate keeps heading down. That’s yet another reason to avoid the overpriced US stock market.

What are your thoughts on this? Let us know your views on this divergence by commenting on the website or by sending an email to robmarstrand@ofwealth.com.