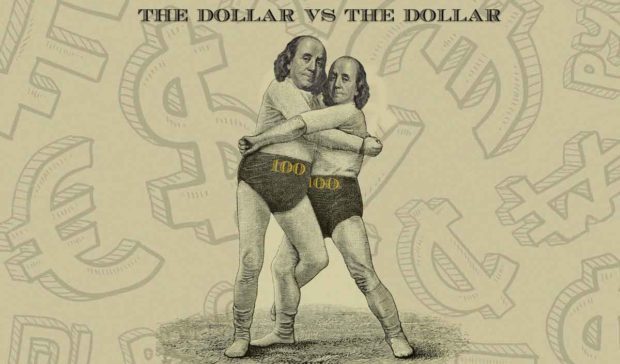 Don’t believe the scare stories. The US dollar will remain by far the world’s most important currency for many decades to come. This means that what happens to the dollar affects investment outcomes in the vast majority of markets. The dollar has been very strong in recent years. Does anyone have a clue where it will go next? Should you worry about it?

I regularly read – and have read for many years – panicky analysis suggesting that the dollar’s role in the world is about to implode. Or that US government debt is out of control and will send the dollar into a death spiral. I used to even believe them.

But as I’ve learnt more over the years about the dollar’s role, how money is created and pumped around (for example, see here and here), and the real level of US government debt (see here), I’ve more or less decided that the dollar is here to stay. At least on any time frame that matters to me or other living investors.

Of course, like any fiat currency, the dollar will lose purchasing power over time. Which is why investors have to seek out places to park their money – such as (favourably priced) stocks, real estate and gold – if they want any hope of their capital value keeping up with price inflation (and on a post-tax basis…).

But that’s not the point. Of all the currencies in use around the world the US dollar is top dog, and will lead the pack for a very long time.

By that I mean it’s the principal currency used in trade and investment. I expect to be long dead by the time this state of affairs has changed. (Despite my young daughter’s misleading claims to anyone who will listen, I’m still well on the right side of 50…)

Of course other currencies will chip away at the buck’s dominance, such as the Chinese renminbi yuan (just as the dollar chipped away at the British pound’s dominance a century ago).  At the same time there’s a decent chance that the only credible alternative today – the euro – will lose ground to the dollar.

In fact the US dollar is so dominant that under the scenarios where it rapidly loses its role – such as another American civil war or nuclear annihilation – I suspect we’ll all have much more pressing issues to concern ourselves with. (Like trying to remember where we buried our gold stash…assuming that we and it haven’t been vaporised or irradiated.)

All of this means the dollar really matters for investors. It has a huge influence on the direction of economies and markets. Changes in the dollar’s level can have major impacts on corporate profits…on the solvency of countries or companies…on commodities markets…on cross border investment flows…on, well, just about anything in the world of finance.

In recent years the dollar has been on a roll (uphill). Below is a chart of the broad trade weighted US dollar index since January 1995 (the earliest date available).

As the name suggests the index compares the dollar to a group (“basket”) of foreign currencies, each of which is weighted according to how much trade the USA does with the country that issues and uses it. Overall there are 44 countries included.

The last time the index was this high was the end of the 1990s and early 2000s. There are two things that are obviously similar to those times: commodities are cheap and stocks are expensive (see here for clear evidence that US stocks are in a bubble – Trump tax plan or no Trump tax plan).

On the other hand there are clear differences. Consumer price inflation was 2.7% in 1999 and a the yield on a 10 year US treasury bond averaged about 5.7% that year. In other words the real (above inflation) yield on 10 year treasuries was about 3%, whereas it’s a pathetic 0.39% today.

Mind you, real yields on government bonds are even more dreadful in Switzerland, the UK and much of Europe. In the UK a 10 year inflation-linked government bond, or “gilt”, is priced for expected inflation minus 1.9%! (Historically you’d expect it to be something like inflation plus 1.5% to 2%.)

So the dollar has been strong for several years. I won’t dwell on the reasons for that, other than to say that it seems to mainly reflect a view that the dollar and many US assets have been the least bad of the international bunch in recent years.

Where does it go from here? I’ve seen some decent arguments both ways – for the dollar to keep on rising, and to fall hard. Here are some of the main ones I’ve come across in recent days and weeks:

The case for the US dollar:

The case against the US dollar:

I’m sure there are plenty of other arguments for or against the dollar. These are just a few that I’ve seen put forward recently by professional analysts. I highlight them merely to point out that there are widely divergent views out there at the moment.

As for me? To be honest I don’t think it’s wise to try to predict short term market moves – especially in the notoriously uncertain currency markets. When prices are mainly influenced by which side of the bed politicians or central bankers roll out of then I’d rather stay away.

(However I do note that if the richly priced US stock market crashes – which is long overdue – then the US dollar is highly likely to strengthen sharply as panicked investors seek a refuge. See 2000 to 2002 and 2008 to 2009 in the chart above.)

I learnt this valuable lesson about currencies over 20 years ago. That was when the investment bank that I worked at voluntarily banned its currency traders from taking directional bets on movements in foreign exchange markets.

The bank’s board got fed up losing hundreds of millions of dollars every year from bad currency bets. (That was a lot of money in the early 1990s…but of course pales into insignificance compared with what’s gone on in the last decade.) If professional traders at one of the very biggest “forex” banks in the world couldn’t work it out, then you or I certainly shouldn’t attempt it (in my humble opinion).

The point is that currency markets are difficult to suss out at the best of times. Right now – with all the political noise and uncertainty in the US, Europe and elsewhere – predicting where the dollar is headed is like a blind man in sunglasses trying to drive a three wheeled car through fog during the night. You simply don’t know where he’s going to end up.

Ultimately, successful investment is about isolating what you do know, recognising what you don’t, and making a judgement about whether the odds are still sufficiently stacked in your favour.

Over the next year or two I’m confident that the US dollar will strengthen…or weaken. In fact I’m so confident that it will do one or the other that I’m not going to to spend a lot of time worrying about it.

Instead I plan to focus my energies on hunting for bargains, such as they exist. I suggest you do the same.