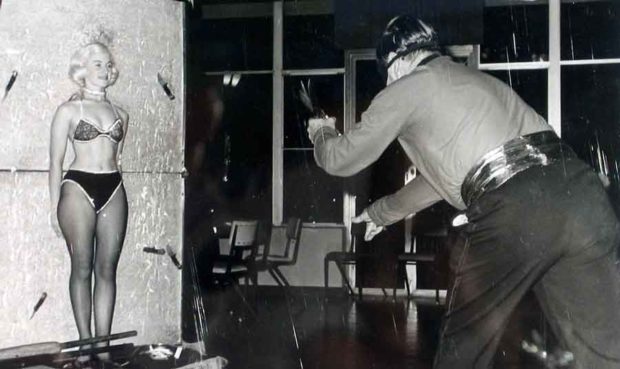 No one can predict when a market will crash. But that doesn’t mean there aren’t signs that the risks are higher than usual. All (and I mean all) valuation multiples tell us that US stocks are in a bubble that was only surpassed in the late ‘90s (and for a couple of months in 1929). Now there’s another worrying measure to add: the ratio of margin debt to market capitalisation is at a record high.

For my latest on ultra-high valuation multiples, see “US stocks back in 1929-style bubble”. Before I get into the issue of record margin debt I’d like to expand on that.

Here’s a chart which compares a range of valuation multiples for the S&P 500 index in July this year with the previous market peaks of October 2007 and March 2000. 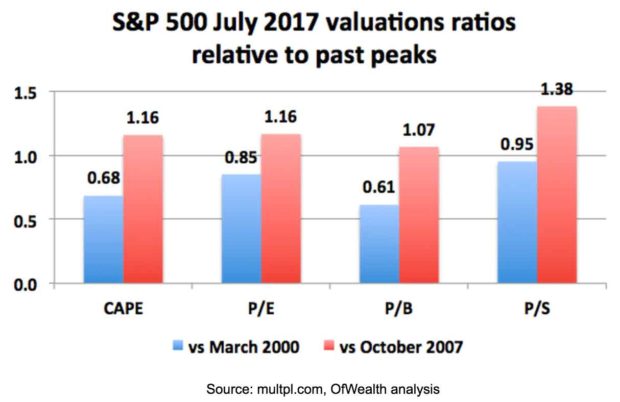 High valuations mean high risks of big price falls. We just don’t know what the trigger will be, or when it will happen. At the other end of the scale, risks are lowest when valuations are low, such as after a market crash.

One of the great and eternal ironies of investing is that most market participants feel highly confident at the riskiest moments (such as now), but least confident when their chances of a profitable outcome are greatest (such as mid-2009). To quote from “Slaughterhouse 5”, Kurt Vonnegut’s book about the Dresden firebombing: “So it goes”.

Another way to look at things

To get (yet) another view of how out of whack US stocks are, I’ve come up with the following chart of the S&P 500 since 1950, plus some additions: 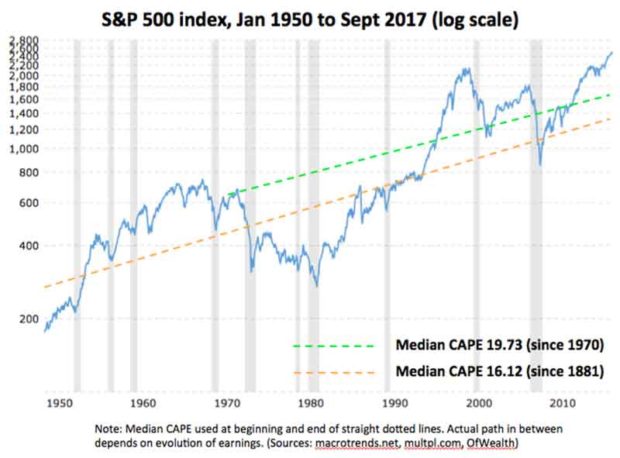 Let me explain what this shows. The blue line is the S&P 500, drawn using something called a logarithmic (log) scale on the vertical axis. Don’t worry if you don’t know how logs work. I can still explain why it’s often helpful for investors to use a log scale.

Log scales are great when looking at investments over a long time scale. This is because the same percentage price move up or down always looks the same size to the viewer’s eyes.

For example, the vertical distance between 200 and 400 is the same as the distance between 400 and 800, since both involve a doubling / an increase of 100% (see the chart if you don’t believe me). With a “normal”, non-log scale the latter would be twice as big as the former, being 400 points instead of 200.

This means that something that grows smoothly, and by exactly the same percentage each year, would appear on a log scale chart as a straight line that slopes upwards from left to right. (On a non-log scale it would look like a smooth curve that progressively gets steeper as you move to the right – an exponential function).

In the real world, markets oscillate all over the place. Sometimes they’re high and expensive, sometimes they’re “about right”, other times they’re low and cheap. Using this kind of chart with a log scale helps to identify quickly where the market is in relation to a trend line.

Some people claim so much has changed versus early market history that it’s not appropriate to benchmark against ultra-long term averages. I’m not fully convinced by this argument. But since the US dollar peg to gold went away in 1971, and the period since then has plumbed extreme valuation depths (1980) and the biggest bubble ever (with a peak in 2000), it seems reasonable to choose 1970 as an alternative start of relevant “market history”.

A big fall is overdue

Another interesting thing is the time period between big peaks. Since the 1968 peak – incidentally when the CAPE was 22, or 28% below today’s 31 – I counted six occasions over 39 years when markets topped out and then fell at least 20%.

That means the average time between market peaks was 6.5 years. It’s now ten years since the last one in October 2007. The only longer period was 13 years between 1987 and 2000. But that was a freak, which culminated in the long tech bubble. (It was already entering bubble territory by 1997, and stayed there until at least 2001.)

Anyway, all of that’s more or less by the by. Regular readers of OfWealth will already know that US stocks are exceedingly expensive. It’s another bubble, driven by hyped-up tech, corporate stock buybacks, and global money printing.

Beyond valuations, another major cause for concern

Recently I came across another major cause for concern: the record level of margin debt reported by the NYSE. Margin debt is money borrowed to buy stocks. There tends to be a lot of it when speculators are over excited. If (when) stock prices fall sharply, loans are called in and borrowers suddenly become forced sellers, adding to the pressure on prices.

Here’s a chart from Advisor Perspectives which sums up the situation: 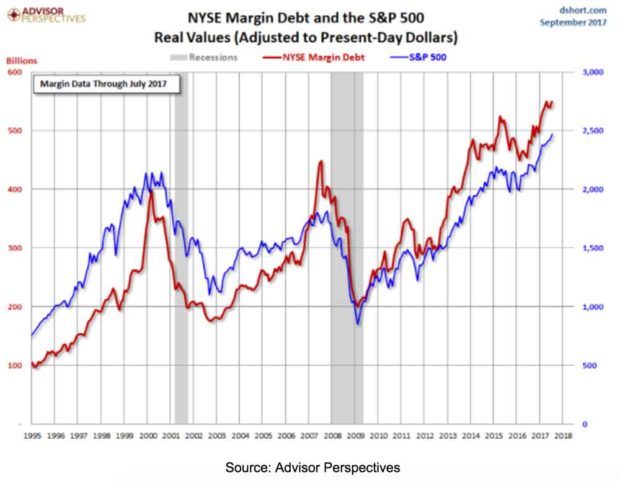 That’s the level of margin loans (in red) and the S&P 500 (in blue) expressed in today’s equivalent prices. You can clearly see how past peaks in margin debt coincided with stock market peaks.

You can also see how margin debt has shot up in recent years, as the US has moved from fully priced, through expensive, and into a bubble once more. The debt is now at $550 billion, compared with $345 billion in October 2007 and $279 billion in March 2000 (figures in US dollars and unadjusted for inflation).

In fact, I’ve compared margin debt to US stock market capitalisation at the previous two peaks with July this year (the last available debt figures). By looking at the relationship between these two measures at different points in time it tells us more about how extreme of otherwise the situation is currently. 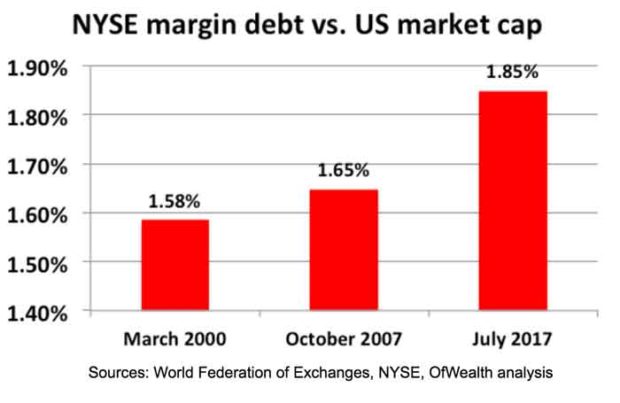 Yes, that’s right. Margin debt is MUCH higher in relation to market size than in either March 2000 or October 2007. Margin debt was $550 billion, compared with US stock market capitalisation of $29.745 trillion.

This is another clear sign of a speculative bubble to add to the many we already know about. The figure of 1.85% may seem small, but it’s all about the relative position when compared with previous market peaks. It’s 17% more extreme than in March 2000. And this is just the margin debt reported by the NYSE. Speculators are bound to be borrowing from other sources.

At least that’s what all the bulls keep telling us…

As for me, I continue to recommend that you tread cautiously.

[In case you missed my guidance on how to go about it, see my recently updated portfolio recommendations.]