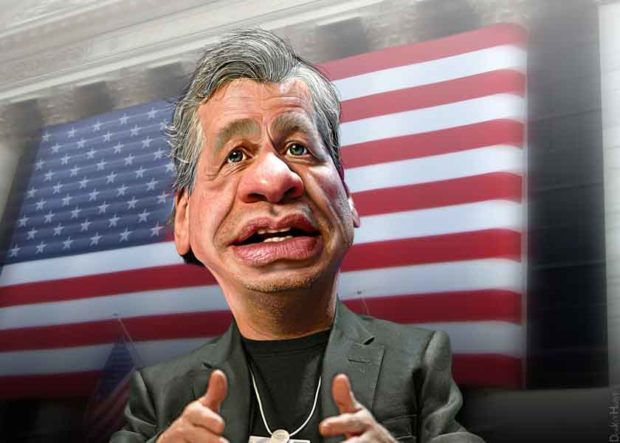 Jamie Dimon is a very big cheese. He’s the billionaire boss of JPMorgan Chase & Co, America’s biggest bank. In his recent annual letter to shareholders Dimon says a lot of sensible stuff. But, a decade on from the start of the global financial crisis, there are also worrying signs that big-shot bankers would like to make the banking system riskier again.

Jamie Dimon is both Chairman (since December 2006) and Chief Executive Officer (since December 2005) of JPMorgan Chase & Co (NYSE:JPM). He’s a dollar billionaire, with around half a billion in JPMC stock. He also studied at Harvard Business School and was on the board of directors of the Federal Reserve Bank of New York.

In other words, he’s the epitome of the US establishment. One of the influencers and power brokers. What he thinks and says matters.

For its part, JPMC is pretty huge. It’s the largest American bank by assets, and the seventh largest in the world (after four Chinese banks, one Japanese and one British).

Last year JPMC made 13% return on tangible equity, and has a set a target of 15%. “Tangible equity” just means shareholders’ equity (net assets) less goodwill, the latter being an accounting oddity.

It also has a 36% pre-tax profit margin, which is extremely healthy. So you’d think that Dimon has little to complain about. All he’s got to do is keep the ship steady, lend a bit more and keep screwing down costs, and his profit target is within reach.

Dimon’s letter to shareholders is a long and comprehensive affair, and contains plenty of good stuff. In fact I’ve read all 44 pages of it, and it includes some nice charts.

Dimon thinks the rules are too strict

Quite a bit of the letter talks about bank regulations and their complexity or contradictions. But a lot of Dimon’s comments are themselves contradictory, and self serving. They’re also a reminder that memories are short, and that bankers are past masters at talking their own book. When we see or hear the heads of big banks arguing for a relaxation of regulations it’s time to sit up and take notice. It rarely ends well.

Since the global financial crisis there’s been a massive tightening of bank capital regulations and liquidity requirements. The idea being that banks are much less likely to go bust, either for lack of long term capital or short term funds.

In simple terms, capital regulations limit how leveraged banks can be. The details are complex, but essentially the rules restrict how many assets a bank can have in relation to fixed capital funding. That capital is mainly shareholders’ equity, but includes certain types of debt borrowings too.

On the other hand, minimum liquidity requirements are there to cover a sudden loss of funding. In a crisis there could be a run on the bank, meaning depositors (short term lenders to the bank) could yank their funds.

Since most bank assets can’t be liquidated quickly – such as customer loans that won’t be paid back for months, years or even decades – banks have to hold big liquidity reserves. These are mostly cash deposits at the Federal Reserve or holdings of US treasury securities (bills and bonds), plus some physical cash and certain other types of highly liquid, government backed bonds.

Dimon illustrates how capital rules have been tightened using the failed Lehman Brothers as an example. According to him, under capital regulations in force in 2007 Lehman had $23 billion of equity capital. Under current rules it would have had $45 billion, or nearly twice as much. Also, if that lot had been wiped out there would have been $120 billion of unsecured debt to convert into equity, recapitalising the bank.

Dimon goes on to argue that the rules are now too strict. That excessive capital and liquidity requirements are restricting lending, and hence US economic growth.

In principle he’s correct to say that high capital requirements can slow lending growth. Ordinarily, new equity capital comes from retained profits not paid out to shareholders via dividends and buybacks. If you double the amount of bank equity needed for each new dollar of lending, you halve the return on equity. In turn that slows how fast you can grow the equity capital base each year, which reduces the maximum rate of lending growth.

This is clearly an issue for policy makers, although not one that they appear to understand. Far from it. In fact a London-based bank analyst that I know pointed out to me that Neel Kashkari, who is president of the Federal Reserve Bank of Minneapolis, thinks US bank capital requirements should be twice as strict as now. If Kashkari ever gets his way, wave goodbye to any prospect of growth in the US economy…

In any case, let’s get back to Dimon. He argues that US banks don’t need as much capital as they’re currently required to have. But he also contradicts himself in two important ways.

First he says this: “We do currently have excess capital.” In other words, what’s the problem Jamie? If JPMC’s got excess capital, and if there’s demand for loans from customers, stop whingeing and get out there and use it.

On top of that there’s another little matter. Over the past five years JPMC has bought back $25.7 billion of its own stock, including $9 billion in 2016 alone.

Look, I get it. In Dimon’s eyes the stock is too cheap, so doing buybacks makes sense. He thinks it’s worth a price-to-tangible-book value (P/TB) of 2, whereas last year’s buybacks were done at an average P/TB of 1.32.

Obviously, doing a cheap buyback is an easy way to add immediate value. If you can pay $1.32 to buy something that’s worth $2.00 it makes sense. It’s an instant 52% return on investment for the remaining shareholders.

At this point is pays to remember the golden rule of stock buybacks: “A company should repurchase its shares only when its stock is trading below its expected value and when no better investment opportunities are available.” (Emphasis added. See “America Inc. breaks the golden rule” for more about destructive stock buybacks.)

But Dimon is saying JPMC’s stock should trade with a P/TB ratio of 2. This means if he keeps those buyback dollars, and uses the capital to grow the business instead, each dollar will be worth $2. Yet he’s saying, at the same time, that the capital and liquidity rules are too strict, which slows down business growth and restricts lending.

Which is it going to be? What Jamie Dimon is really saying is he wants regulators to give banks an easier ride, which will goose up their stock prices. But you all know how that turns out in the end…

BanksBuybacksEconomic CrisisGDPStocksUSA
Previous ArticleBoosting the economy one account at a timeNext ArticleWhich is the “right” P/E ratio?