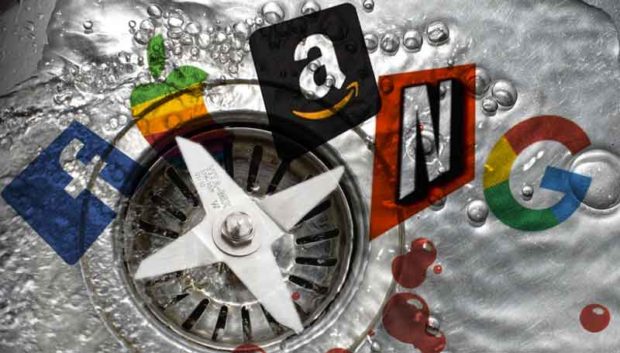 Today I’ve decided to share a recent article written by Bill Bonner, a friend who I’ve worked with in the past. He takes a look at the FAANG stocks – a bubbly group made up of Facebook, Apple, Amazon, Netflix and Google (now called Alphabet).

According to recent analysis by Bank of America Merrill Lynch – an investment bank with a sensationally long-winded name – FAANG stocks were up 3.4% this year. The S&P 500 was up 2.7%. But the S&P 500 excluding FAANG stocks was down 0.7%. In other words, the US market has had a lot riding on a handful of stocks that are priced for perfect business results from here to eternity.

These are each impressive companies in many respects. But that doesn’t necessarily make them great investments. Price is everything, whatever the underlying business. And market sentiment is a fickle filly.

The FAANGs will crash

Rumor has it that he is some sort of advanced robot, “reptilian,” or alien.

“Lord Zuck,” the kids call him.

Today, if after-hours trading trends continue, Facebook will suffer its biggest loss in stock market history. And if that keeps up, Lord Zuck will soon be sleeping in his car, parked in a Walmart lot in Menlo Park. From MSN:

The tech-heavy Nasdaq was set for a big down day Thursday after disappointing quarterly results from Facebook sent the social media giant hurtling toward its biggest share price decline ever and on track to lose more than $125 billion in market value.

The Invesco QQQ Trust, which tracks the Nasdaq 100 index and can give traders a good idea of how the Nasdaq stocks will trade, was down more than 2 percent at one point in after-hours trading Wednesday. At last count, the ETF was off by about 1.4 percent. Nasdaq futures opened lower Wednesday evening, off by about 0.7 percent.

Big technology stocks other than Facebook felt the collateral damage as investors fled the sector. Apple lost about 1 percent. Facebook’s “FANG” brethren were also lower. Amazon, which reports after the bell Thursday, lost 2.2 percent. Netflix, which disappointed FANG investors with its own set of weak results earlier this earnings season, about 3 percent in after hours. Google parent Alphabet fell 2.3 percent.

Because the S&P 500 is so “tech heavy,” all of the gains in the stock market this year have come from the Big Tech stocks, the FAANGs: Facebook, Amazon, Apple, Netflix, and Google.

The tech companies are all, more or less, in the entertainment business. The model is not much different from magazines. They capture readers’ attention with lurid pictures, fake news, gaudy prose, and misleading information – and sell access and advertising space.

But investors do not see old TIME or Newsweek when they look at the tech giants.

They see something new… pie-in-the-sky – virgin industries harnessing the wizardry of technology to deliver almost unlimited growth and profits.

And not for the first time. Markets move in big, long sweeps – taking decades to complete. Each time they near a top, they get dizzy.

The last major top was in the late 1960s. The market peaked out, in real terms, in 1966. Then, stocks trended downward for the following 16 years.

We saw another mini-top in 1987, which put the feds in a lather… panting to get stock prices up again.

For the first time in U.S. history, the Fed backed stock investors in what came to be known as the Greenspan put. The Fed slashed rates and flooded the market with EZ money. Stocks floated higher.

This foolish exercise (which we have described as Mistake #3 of Fed policy) was repeated after the subsequent tops in 2000 and 2007.

Tops mark crests in human optimism… points of maximum illusion, when people imagine that trees really do grow to the sky and fairy tales really do come true. Then, they are willing to pay prices that have no connection to earnings.

Stocks represent part ownership of businesses. They are only valuable to investors insofar as the businesses make money and share it with them. But the techs often make no money at all.

They offer eyeballs, a bold and exciting fantasy future, and dreams of wealth beyond measure… but no cash.

Back at the peak of the Roaring Twenties bull market, investors took a shine to companies that developed the technological marvels of the time – automobiles and electrical appliances, mostly.

Then, in the Johnson era, electronics were the folie du jour. Companies with “onics” or “tech” in their names traded far beyond their actual earnings.

In our own era, the dot-coms were famously overvalued during the tech boom of the late 1990s.

We began writing this diary – then called The Daily Reckoning – in 1998, 20 years ago. We recall sneering at the internet darlings of the late ’90s and mocking the gurus of the time, such as George Gilder (who has since joined our very short list of heroes for his help in understanding our fake-money system).

We recall warning that the bubble would burst. And finally, we remember how upset readers were with us.

It was as if we had told a child that their dog had died and Santa Claus was a fraud. They didn’t want to hear it.

They had found their Messiah; they knew that dot-coms would liberate them from want… from need… from having to save money, think hard, or satisfy customers.

Alas, no substitute for hard work, discipline, patience, or luck has ever been discovered. Man was expelled from Eden a long time ago. Never since has he been able to live without sweating and hustling, despite huge gains in technology.

Present tech wonders will be no exception; today’s Icarus tech stocks will crash, just like the rest of them.