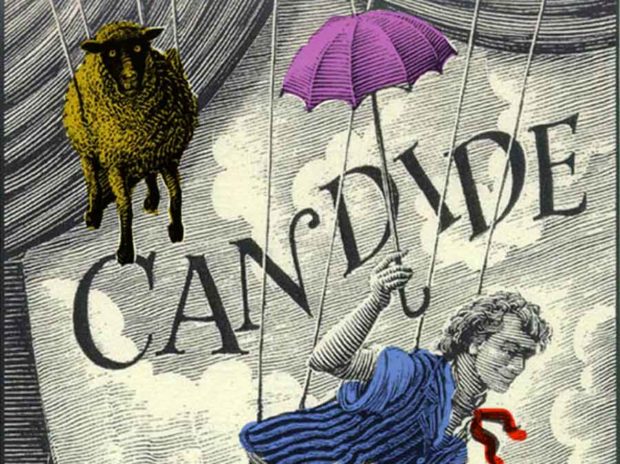 After a sleepy 2017, stock volatility is back in 2018. But, so far this year, long-dated US treasury bonds have failed to provide an offset to sharp stock falls. However, one asset has done well, performing its portfolio hedging task nicely. That’s gold. I continue to recommend a meaningful allocation to physical gold (and even more to cash).

The first three months of 2018 have seen much bigger swings in stock prices than any time in 2017. Just look at this chart of the S&P 500 index of US stocks over the past year. 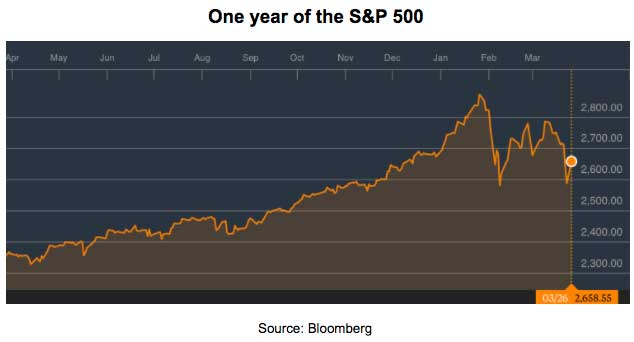 What’s caused this? Is it the fear of rising interest rates? Or the gathering pace of quantitative tightening (QT), being the reversal of QE? Or a potential trade war between the US and China? Or tensions between Russia and the West?

Maybe it’s all of the above, plus many more micro reasons that don’t fit conveniently into headlines.

Or perhaps it’s simply that everyone got over-excited, and reality is finally dawning.

The French philosopher Voltaire wrote his satirical book Candide way back in 1759. In there, he poked fun at a school of thought known as Leibnizian optimism. (Incidentally, the book was widely banned, accused of blasphemy and political sedition. Censorship and political controversy are nothing new.)

The optimists were sarcastically accused of believing that “all is best in the best of all possible worlds”. In other words, they believed nothing could possibly be better than the world we already inhabit. In January, this would have been a pretty good fit for general opinions about the prospects for US stocks.

I don’t care how many times the “this time it’s different” crowd comes up with justifications for sky-high stocks, the S&P 500 index’s price-to-earnings (P/E) ratio of 25 is abnormally high. Especially when the long run median P/E for US stocks is just 14.7, or 41% lower.

More recently, investors in US stocks have been suffering excessive optimism for at least a couple of years. Only once in my adult life have investors appeared more euphoric, in the latter stages of the late ‘90s tech bubble.

Back then they fell for guff about a “new paradigm”, where productivity was going to rocket and economies would boom for eternity. Instead, all we got was information overload, ageing populations and the incessant creep of burdensome government regulations.

This time around it’s like investors thought that trillions of dollars of QE money printing, combined with pathetic or negative real interest rates, could go on forever. Finally, people are slowly realising that this is abnormal (quelle surprise).

It’s unlikely that money managers have suddenly and collectively started reading Voltaire (to say the least!). But perhaps enough investors have started to have an inkling that all may not be best, and we may not be living in the best of all possible worlds. It’s not like there’s a shortage of things that could go wrong for today’s ultra-optimists.

Put another way, US corporate tax cuts may be modestly beneficial to short-term profit margins. But, in the medium to long run – and assuming the US economy is still basically capitalist, and not everything is run by cartels or monopolists – any benefit should be competed away.

Then there’s the prospect of rising price and wage inflation – spurred on by an expanding US fiscal deficit – combined with the inevitable, extra corporate expense of higher interest costs. The effects are most definitely not positive for corporate profits, nor for stocks.

So far in 2018, given this backdrop, neither stocks nor bonds have provided a safe house.

Through December and most of January, expensive US stocks jumped even higher. As we head into the end of March, most of those gains have gone.

However, one thing has sailed through this all fairly calmly, and has provided a decent hedge. That’s gold. Low tech as it may be, it’s currently doing nicely.

Below is a chart that compares gold with the S&P 500 stock index and long-dated US treasury bonds since the start of December. For gold I’ve used the SPDR Gold Shares (NYSE:GLD), for the S&P 500 I’ve used the Vanguard S&P 500 ETF (NYSE:VOO) and for treasuries I’ve used the iShares 20+ year Treasury Bond ETF (NYSE:TLT), which includes treasuries with a weighted average maturity of 25.8 years. 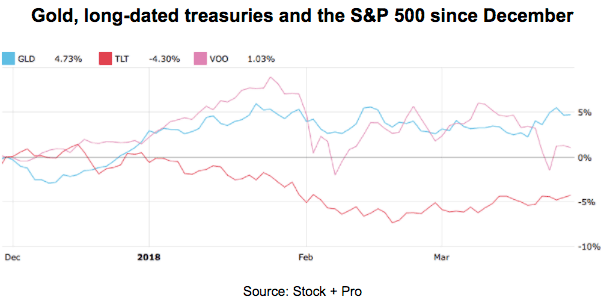 Why this has happened is less clear. Real yields have been rising, which is usually a bad thing for gold. According to the Federal Reserve Bank of St. Louis, the real yield on 10 year TIPS (Treasury Inflation Protected Securities) was 0.43% at the beginning of November, and is now 0.75%.

Notwithstanding that, gold has done well. Whether it’s speculators, investors, jewellery demand or central bank buying, someone has been bidding up gold.

As regular readers know, I recommend a holding of physical gold – being bars or bullion coins – for two main reasons.

Over the long run, it’s what I call the “ultimate consumer good”. The slow-growing stock of supply is running up against the fast-growing wealth of gold-hungry emerging markets, especially the twin giants of China and India. Between them, those two countries alone make up 36% of the world population.

Assuming such economies continue to grow at a faster clip than the developed world – and there’s no reason to suppose otherwise – I expect this to drive up the gold price for decades to come, at a rate that’s ahead of inflation. That’s as more and more people can afford to adorn themselves with more gold jewellery, or simply invest in bars and coins (see here for more).

The second reason to own gold is as insurance against financial uncertainty and distress. Banks can go bust, and governments and central banks can hit their money printing buttons and devalue their currencies, but gold endures. Maybe it’s this side of the equation that’s caused gold to be well bid this year…and rising real yields be damned.

Either way, gold has proved its value as a diversifier in 2018 – at least so far. In fact, on the quiet, gold has done pretty well over the past couple of years.

What happens next? Nobody knows, at least not in the short run. But, given the recent swings in stocks, I still reckon it pays to hold a chunk of physical gold, and also plenty of cash (meaning mainly bank deposits or very short-dated treasury bills).

If stocks do take a bigger dive in coming weeks and months, then cash is “ammo”, ready to be fired off at some newly cheap targets. In the meantime, it’s also “ballast”, steadying the portfolio ship while everyone makes up their minds about what’s going on.

Despite the poor recent performance of long-dated treasuries, I’m still keeping a small allocation. When I added it to my recommended portfolio in August 2017, I said it was only begrudgingly (ideally I still wanted higher real yields).

But, if we get a proper stock market crash then I’d still expect bond yields to fall, and treasury prices to rise sharply. So I’m keeping treasuries as a hedge against a stock crash.

As for stocks, you should still have an allocation. But only those you can find that are sensibly priced, which are mostly found outside the bubbly US at the current time.

If there isn’t a big fall in stocks in general, and things settle down again, you don’t want to miss out entirely. Even if there is a substantial stock correction or crash, something bought well now will still do well in the end (typically with a year or two’s delay, depending on how severe the stock market dislocation is).

Here’s a reminder of my full recommended portfolio, which remains unchanged since August last year:

After a period of abnormal calm in 2017, uncertainty and price swings are back this year. It’s more important than ever to play your hand cautiously, be patient and stay diversified.