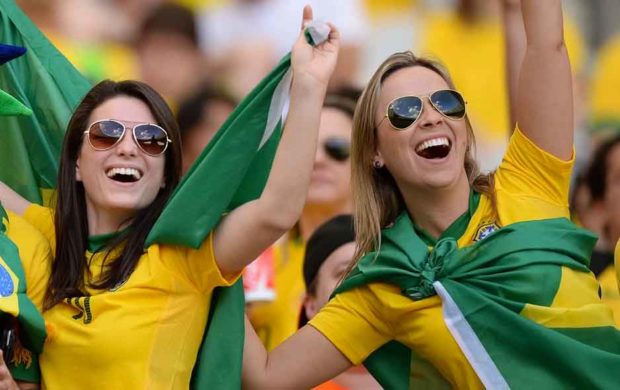 The Brazilian stock market has been hammered in the last few months. In US dollar terms, it’s one of the worst performing emerging markets so far this year. Even now, Brazilian stocks don’t look cheap. Investors appear to have finally woken up to the uncertain outcome of presidential elections later in the year.

A number of years back, I remember walking down a street in Buenos Aires, where I live. I was with an Argentine and we were following a well-dressed Brazilian couple.

That was eight years ago, in 2010. I can pinpoint the time because it was during a previous football / soccer world cup, which are held every four years. The current one just started in Russia. The last one was hosted by Brazil, so no self-respecting Brazilian would have gone on holiday to the rival, neighbour country at the time. So this must have been during the one before, which was hosted by South Africa.

The Brazilian currency, the real, had already recovered from the losses suffered during the global financial crisis. One US dollar bought around 1.6 reais, and foreign travel was relatively cheap for Brazilians.

I commented to my Argentine companion how I’d noticed a great number of Brazilian tourists in Buenos Aires. “Yeah, enjoy it while it lasts” she growled in the direction of the well-dressed couple. Decades of economic ups and downs, in both Brazil and Argentina, mean few people expect the good times to last in either country.

Dialling forward eight years, it now takes 3.7 reais to buy one US dollar. That’s a devaluation of 57%, equivalent to losing 10% a year in between (at a compound rate). Unsurprisingly, Brazilian tourists seem thinner on the ground these days. Instead, you’re much more likely to encounter Venezuelans seeking refuge from the hyperinflationary meltdown of their country. 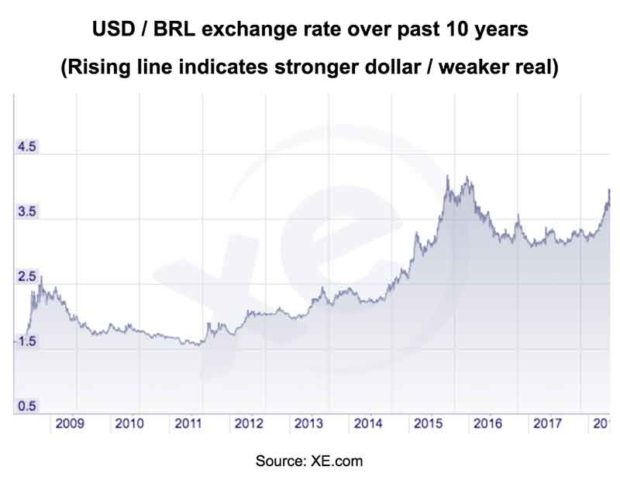 Earlier in the week, I spoke with an English friend of mine who also lives in Buenos Aires. He’s married to a Brazilian wife, lived in Brazil for many years, and had just returned from a weekend in Sao Paolo, Brazil’s largest city and financial centre.

Describing the current mood in Brazil, he said there was a “general unhappiness with the political situation”. Brazil has been going through a political saga in recent years, as public prosecutors have gone to town on the deeply corrupt political class. There’s a presidential election coming up in October, and it’s extremely difficult to call which way it will go. In fact, the whole thing looks like a big mess.

Current President Michel Temer is implicated in corruption charges but has managed to fend them off while in office. In any case, he’s deeply unpopular, with single digit approval ratings, and wouldn’t win if he tried to run in the elections.

Temer only got the job because the previous incumbent, Dilma Rousseff, was impeached in August 2016. Technically the impeachment wasn’t for direct corruption, but for “fiscal crimes” (illegal funding of programmes) while in office. However, the impeachment process sprang out of the huge corruption unearthed at state oil company Petrobras, where Rousseff had previously chaired the board of directors. As Vice President at the time, Temer got the top job by default.

Currently leading the opinion polls is Luiz Inacio Lula da Silva, or just “Lula” for short. He was Dilma’s predecessor as president. If he ran again, around 30% of Brazilians say they would vote for him in the first round (set for 7th October). That would put him well ahead of the other runners and likely to win in the second round run-off between the two leading candidates (28th October).

But Lula can’t run. That’s because he was sent to jail in April for…yes, you guessed it…corruption. Are you starting to see a pattern here? In fact, the corruption is not just concentrated at the very top. In the past few years, hundreds of politicians, officials and business people have been prosecuted for corruption. It appears that practically the entire ruling class of Brazil operates in a fetid cesspit of corruption and graft.

With Lula and Temer out of the running, this leaves the field open for the presidency. Behind Lula, Jair Bolsonaro has about 19% support in the polls. He’s running for the Social Liberal Party (PSL), which sounds mildly to the left. But he’s usually described as a populist right-winger. Marina Silva has about 14% in the polls, and is described as moderate and environmentalist. Geraldo Alckmin is a centrist conservative and governor of Sao Paolo state. But commentators generally seem to think he’s unlikely to garner enough support across the country as a whole.

It’s all an extremely confused and fluid situation. Perhaps no wonder then that it’s finally concentrating the minds of investors in Brazil.

In US dollar terms, the Brazilian stock market is down 16% year to date, making it one of the worst performing emerging markets this year. That said it’s nowhere near as bad as Turkey (down 34%) or Argentina (down 30%, but classified as a frontier market).

But it’s still pretty bad, especially in recent months. Once again measured in US dollars, Brazilian stocks are down 28% since their February peak. Of that, 18 percentage points are due to falls in stock market prices, measured in the local currency, and the rest due to weakness in the currency itself.

The following chart of the iShares MSCI Brazil Capped ETF (NYSE:EWZ) shows how the market has progressed over the past year (in dollars). 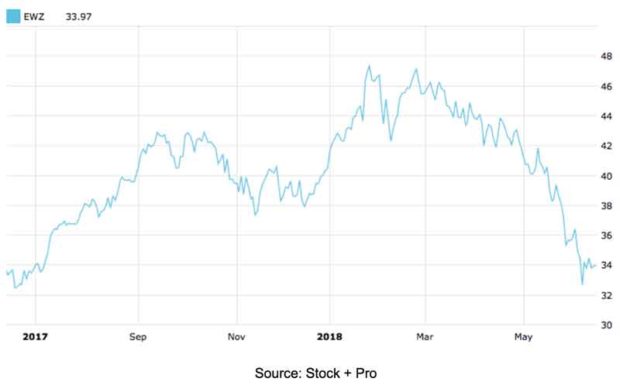 Basically, it’s back to where it started this time last year. Perhaps the biggest mystery, given all the local uncertainties, is why Brazilian stocks rose so much before the recent falls. I suspect a large part is due to big falls in Brazilian interest rates. The reference rate was 14.25% as recently as October 2016, but has now fallen to just 6.5%, a record low.

In any case, despite the big recent falls, Brazilian stocks can hardly be described as cheap. According to data on the fund’s website, EWZ currently trades with a price-to-earnings ratio (P/E) of 14.4. That gives an earnings yield of 6.9% (1 divided by 14.4, as a percentage). Let’s put that into perspective.

About 31% of the index is made up of the energy and materials sectors. The top-line sales of those sectors are largely determined by global commodity prices, although many of their input costs are in local currency. For example, Vale SA (NYSE:VALE) is a huge miner or iron ore, and makes up 13% of the index. Petroleo Brasileiro (NYSE:PBR), or Petrobras, is an oil company that’s another 8%.

Of the other 69%, most companies’ profits will be closely tied to the local currency. The financial sector, mainly consisting of banks, is 32% of the index. Consumer companies are a further 17%, utilities 5% and telecoms 3%, with the remaining 12% in smaller sectors.

Basically, the vast majority of the underlying profits are generated in local currency. When deciding whether to buy Brazilian stocks or not, a local investor should compare them to what’s on offer elsewhere. Most notably, they can currently make a 12.1% yield on 10-year Brazilian government bonds.

Given that, the investor should ask this question: why should I buy Brazilian stocks with an earnings yield of just 6.9%? You’d have to be expecting some kind of major profit boom for that to make sense. To me at least, that seems like a remote possibility.

Taken as a whole, Brazilian stocks remain overpriced. Combined with the substantial political uncertainties, I continue to recommend that you stay away.