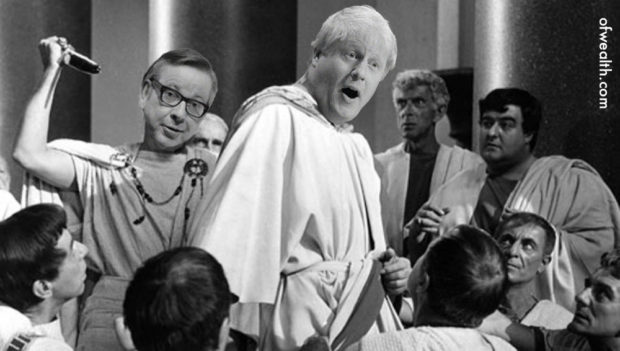 The British vote for a “Brexit” from the EU has been followed by a week of high drama in British and European politics, and in global financial markets. After the initial panic, markets have stabilised. So is that it? Yes and no.

I’ll get to markets in a minute. But first a quick look at the political turmoil enveloping Britain. The old blades have been dusted off and sharpened, and once again it’s time for politicians to watch their backs. But the bloodletting has already begun.

“It might be in my party’s interest for him to sit there. It’s not in the national interest, and I would say, for heaven’s sake man, go!” This was outgoing British prime minister David Cameron’s message to the opposition Labour Party leader Jeremy Corbyn.

The event was prime minister’s questions in the House of Commons. This is where politicians get a weekly opportunity to grill the prime minister in front of members of parliament of all stripes, and the TV cameras. It’s always a combative environment, and if nothing else serves to make sure all prime ministers must be well briefed and highly eloquent, whatever their political leanings.

The opposition Labour party is imploding. It’s current leader is from the old, hard left and enjoys high levels of support among grassroots activists. But around 80% of the elected representatives in his party have deserted him. Yet he’s refusing to step down.

This infighting should be great news for the Conservative party, which is in government. So it’s a clear measure of the fragile nature of the country that Conservative Cameron was so clear in his demand that Labour Corbyn steps down.

But Corbyn has dug his heels in, for now, and is losing friends fast. This week, he even managed to offend jews in a meeting that was meant to highlight anti-semitism. In a sense he achieved the meeting’s aim, but certainly not in the way that most expected.

For its part the Conservative party also has a leadership battle going on, and the knives are out. Until two days ago most people thought that ex-London mayor Boris Johnson, who led the campaign to leave the EU, was a shoo-in to be the next prime minister.

Then his main partner in the campaign, the justice minister Michael Gove, stabbed “BoJo” in the back just two hours before Johnson was due to announce his pitch. Gove announced his own candidacy and said BoJo was incapable of doing the job. Boris, lacking party support, backed out.

The next prime minister is now expected to be Theresa May, who has been Home Secretary (interior minister) for the last six years. This is odd in itself, since she campaigned to remain in the EU. The surprises and contradictions just keep coming…Of course, that’s always the nature of politics, but it’s reached extreme levels in Britain in recent weeks.

Then up popped the ex-prime minister Tony Blair, who is almost universally detested in Britain. Not least following the “dodgy dossier” on weapons of mass destruction that was used as a pretext for the war in Iraq. Most people refer to him as “Bliar” or “Bleargh”.

In the build up to the Iraq war he said he felt “the hand of history on his shoulder”. These days, a great many British people would be more inclined that he felt the boot of rejection on his nether parts.

Blair appeared to volunteer his services in the negotiations with Brussels that now have to take place. But then he said that “serious statesmanship” was required, unconsciously ruling himself out.

As the British political drama continues to unfold, markets have been calming down again (see here, here and here for earlier analysis). The FTSE 100 index of British stocks has recovered all post-Brexit losses and is 4% above the level of a month ago. Many of the biggest companies are multinationals or commodity producers, which actually benefit from the suddenly weaker British pound. The S&P 500 index of US stocks has also recovered all recently lost ground.

The pound is still down 10% against the US dollar. Mark Carney, the Canadian national that is the governor of the Bank of England, made a speech saying he thought interest rates were likely to be cut over the summer to support the economy.

But he also acknowledged that inflation could increase due to the weaker pound, which would usually mean higher rates. In other words it will be a tricky balancing act.

Then there was the punch line. Carney pointed to the potential for a “host of other measures” and markets thought “Yippee, more QE!” Bond and stock prices rose immediately.

QE is quantitative easing, the process where central bank print money to directly prop up bond markets, and indirectly support stocks as well. It’s central banks’ preferred tool for keeping markets in denial about a miserable situation – such as the huge and unsustainable debt burdens in most developed countries.

My guess is that the Bank of England won’t be the last to go down the route of more QE. The world economy was already weak or slowing pre-Brexit…across Europe, in Japan, in China, and in the US.

Brexit is the perfect excuse for injecting more liquid euphoria into the limp veins of the global financial system.

How else do you explain over $11 trillion of government bonds that now have a negative yield, or that most of the rest of them yield less than 1%? Brexit is the perfect excuse for injecting more liquid euphoria into the limp veins of the global financial system.

Corporations from Los Angeles to Lapland will get in the game as well. They’ll be trotting out the “Brexit impact” as their preferred excuse for weak earnings for months to come, and possibly years. Never mind that they haven’t been investing in business expansion for years or that earnings growth is already tepid as a result (for more on the situation in the US, see here).

Turning to bond markets again, there are other strange goings on. Despite the political chaos and potential for higher inflation, ten year British government bonds, known as gilts, yield just 0.89% “post-Carney”. By comparison, 10 year US government bonds, known as treasuries, yield a higher (but still low) 1.47%. Investors in British bonds seem to be betting on recession and more QE, and ignoring the risk of higher inflation.

All of these negative yields are good for gold, especially when combined with the new uncertainties and the prospect of more money printing. The usual argument against gold is that it doesn’t pay a yield, unlike cash deposits, bonds or stocks.

Never mind that gold’s past price rises have comfortably beaten inflation since it was untethered from the US dollar in 1971 (see here and here for more on gold’s long term performance versus stocks). In any case, one thing is certain: zero yield is better than a negative yield. Gold is holding it’s post-Brexit levels, at least so far.

Then there are the banks. Earlier in the week I pointed out that bank stocks, especially in Europe, were imploding – and that this process had started well before the Brexit vote. So the question I asked was: Has “Brexit” started a new global banking crisis?

Judging by most of the responses I received from readers, you don’t think it has. That’s probably right, but it’s still right to pose the question given how the markets have been voting. In any case, further digging has unearthed some evidence that there are clear pockets of distress.

Is the Brexit panic over? Sort of. But there will be plenty more twists and turns in the coming days, weeks, months and years – in Britain, across Europe and in the world at large.

The question now is whether that distress could get worse, or spread to other banks. More on that next week.