There are two ways that companies distribute cash to shareholders: dividends and stock buybacks. In the case of the S&P 500 index, for the period 2012 to 2017, cash used for stock buybacks far exceeded dividend payments. Despite this, buybacks receive relatively little scrutiny and are often badly misunderstood. It’s time for a closer look.

Today’s article isn’t going to focus on when stock buybacks (or ‘repurchases’) make sense or not, which I’ve previously covered. But here’s just a quick reminder of the ‘golden rule’ of buybacks.

“A company should repurchase its shares only when its stock is trading below its expected value and when no better investment opportunities are available.”

Put another way, buybacks add value to shareholders when the stock is cheap and destroy value when the stock is overpriced. That’s explained in further detail in an earlier article, which I encourage you to read if the above statement isn’t clear (see here).

Buybacks are a big deal in many stock markets, but especially in the US. In the six years to the end of 2017, companies in the S&P 500 index spent almost $3.1 trillion dollars on buybacks, compared with just over $2.1 trillion distributed as dividends (figures from S&P). Put another way, buybacks made up 59% of total cash distributions and exceeded dividends by 43% (using unrounded, underlying figures).

Despite this, buybacks receive relatively little scrutiny. Whereas it’s easy to find stocks’ dividend yields or dividends per share (DPS), finding information on stock buybacks is much more involved.

At the individual company level it involves analysing cash flow statements. At the index level the data is usually buried deep within specialist websites. As a result, much investment analysis puts a lot of focus on dividends, but completely ignores buybacks. As I’ve done before, I’ll try to fill part of the gap.

All other things being equal, a dividend payment should reduce the stock price by the same as the dividend amount. The shareholder doesn’t lose out, since the drop in the price is offset by the cash received. This is what happens when a stock goes “ex-dividend”. Shareholders before that date will get the next dividend. Buyers after that date won’t get it (but will get future ones).

At the whole company level, the value of the company includes expectations of (usually growing) future cash distributions from earnings, plus any excess cash currently on the balance sheet (not needed for operation of the business). That excess cash is what’s used for dividends and stock buybacks (although some is often retained).

The value of each share is the total company value – including the excess cash – divided by the number of shares. When a dividend is paid, there is no change to the number of shares. So the reduction in cash held within the company is reflected in the fall in the stock price when stock goes ex-dividend. Cash merely switches from being in the hands of the company to being directly in the hands of the shareholders.

In the case of a stock buyback, exactly the same thing happens at the whole company level. Excess cash is paid out and the value of the company falls by that cash amount, just the same as with a dividend payment.

However, the stock price doesn’t fall. This is because the remaining value of the company is now split across fewer shares.

This means that cash distributions via dividends or buybacks are equivalent, at least if the stock is repurchased at fair value (and barring any differences in tax treatment). Investors in companies that pay dividends get some cash but see the stock price fall by the same amount. Remaining investors in companies that do buybacks don’t see an immediate stock price fall but receive no cash.

In both cases, at a constant P/E, the stock price will rise over the longer term, assuming earnings and cash distributions increase. Let’s imagine two identical companies. Each has the same businesses, earnings and cash to distribute. Both stocks trade at fair value and a constant P/E ratio. The sole difference is that Company A only pays dividends and Company B only does stock buybacks.

Understanding this makes it clear that stock buybacks shouldn’t increase stock prices in and of themselves. They just hold prices higher than the alternative, which is to make bigger dividend payments.

Despite this, there’s been a lot of chatter about how increased stock buybacks in the US should drive the market higher. This followed US corporate tax reform, which makes it much cheaper for US corporations to repatriate overseas cash profits without huge tax penalties.

(It should be noted that much of that overseas cash is not “excess”. US companies often loaded up on domestic debt at the same time as piling up overseas cash, because of the tax restrictions. Much of the repatriated cash may simply be used to pay down that debt burden. That will shrink balance sheet assets and liabilities, but add no value.)

How things have changed over time

Buybacks weren’t a big deal until after the early 1980s, when changes to regulations made them easier for US companies. Over time they’ve become a much bigger share of total cash distributions, including both dividends and buybacks. Below is a chart of that share, at 10-year intervals between 1977 and 2017 (based on earlier analysis I’ve done, brought up to date for this article). 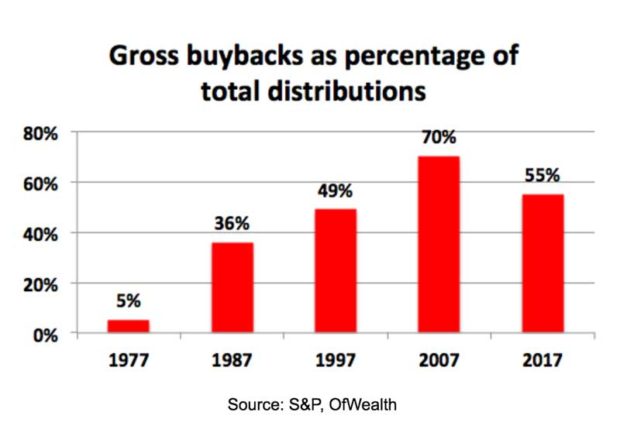 You can clearly see the big jump in the ‘80s, and the continued climb. Things peaked out around 2007, before the global financial crisis got fully underway. That was partly because the banks were doing big stock buybacks at the time (since they had loads of ‘excess’ capital, at least in relation to the lax regulations at the time). In recent years, things have settled into the 50-60% band.

Interestingly, despite the shift from dividends to buybacks, gross distribution yields have remained relatively stable. From 1900 to 1980, before buybacks took off, the average dividend yield of the S&P 500 was 4.9%. In the past six years, the gross distribution yield has also averaged 4.9%, although that’s split between 2.0% dividend yield and 2.9% gross buyback yield.

That sounds great, but there are a couple of major catches. First is that, for the S&P 500 index as a whole in recent years, companies regularly distribute more than their profits. Second is that significant stock issuance – a large part to pay company executives – offsets much of the gross buybacks.

You can see in the following chart how combined payout ratios – including both dividends and buybacks – significantly exceeded 100% of reported profits in four of the past six years. 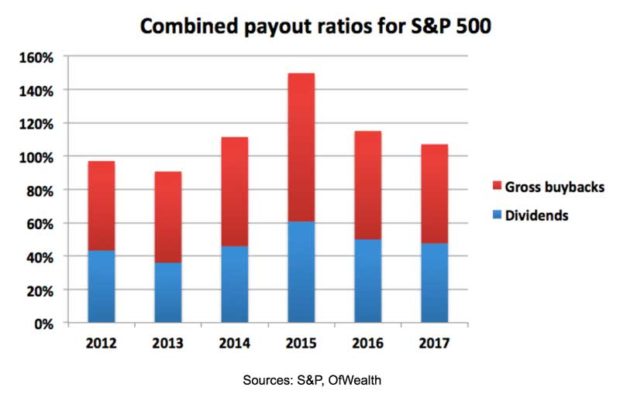 Clearly, consistently paying out more than is earned is unsustainable. In the short run, it can be covered by selling assets or piling on debt. But it can’t go on forever.

(I’m aware that a comparison to free cash flows would be ideal, but I don’t have the data. However, over time, reported profits and free cash flows should come more-or-less the same. Also, see here for how some of the “dividend aristocrats” consistently live beyond their means on a cash flow basis.)

The second problem is dilution from stock issuance. By looking at actual changes to the stock count and backing out the gross buyback yields, I estimate that this averaged 1.8% a year over the past five years. This slams the average buyback yield down from 2.9% (gross) to just 1.1% (net).

Adding the average dividend yield of 2.0% over the same period means that total net shareholder yield was 3.1%. That’s way below the historic, pre-1980 average of 4.9%.

Some of that dilution will be due to capital raises for business expansion. But much of it’s down to stock that’s issued to company executives as part of compensation plans. I don’t have precise figures, but estimate compensation plans account for about 1% dilution per year.

If that’s correct, then over one third of stock buybacks are just passing shares from outside stockholders to corporate insiders. Put another way, a large part of the motivation for buybacks is to cover company stock plans, and offset their dilution.

Of course, if you didn’t pay people in stock then you’d have to pay them more cash. So it’s swings and roundabouts. Companies can use cash to buy stock and pass it on, or they can have higher cash expenses in the first place.

The implications for valuations

Overall, much lower shareholder yield points to a valuation problem. Between 1900 and 1980, stripping out P/E changes, US stocks returned 9.2% a year. Stripping out 3% average annual inflation, that gave a historical real return of 6.2% a year.

Of that, 4.9% came from dividends, leaving 1.3% from other factors (profit growth and changes to the share count). Looking at today’s market, with the net shareholder yield running at a much lower rate, one of two things needs to happen (or a combination) for investors to make the same kind of real (above-inflation) returns in future:

Alternatively, index investors will have to just satisfy themselves with lower real returns in future, over the long-term. Will they be prepared to do that? What’s your view?

[Fortunately, there are plenty of individual stocks that offer better prospects – meaning attractively priced stocks of sound, growing companies with a healthy income yield. My service, OfWealth 3D Stock Investor, is dedicated to finding them. I encourage you to check it out.]