Growth of corporate earnings is one of the main things that drives stock prices. In fact, in the long run, it’s the only thing that matters. Unsurprisingly, earnings grow quickly in fast growing economies. These days, India has the world’s fastest growing large economy. Which begs the question: Should you buy Indian stocks?

India’s economy is expected to grow by 7-8% this year. That puts it ahead of the other Asian giant, China, which should grow by 6-7%. And it leaves developed countries for dust. 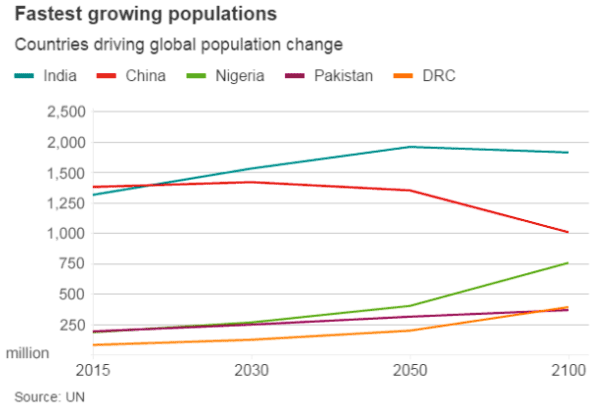 That said, India is a much poorer country than China. According to the IMF, India’s GDP per person is about US$1,900, less than a quarter of China’s US$8,100.

Of course the place is wracked by many of the problems of poorer countries. Rampant corruption, poor infrastructure and populist politicians being just some of the many problems.

But in a sense that’s where the opportunity lies. It’s easier to go from bad to good than it is to go from good to better.

What about Indian stocks? Are they attractive for investors? Let’s examine the evidence.

The high rate of economic growth is good for corporate profits. More people, more wealth, more money sloshing around the economy, more sales…it all adds up to more earnings. That much is clear, even if there will be the usual up and down economic cycles along the way.

What about valuation? The MSCI India index had a P/E ratio of 21.3 at the end of October, which looks pricey. It also has a low dividend yield of just 1.3%, which is on the low side.

But that’s not the whole story. Indian companies make a relatively high return on capital. In fact the return on equity of the MSCI India Index is about 15%, well ahead of the 12% for companies in the S&P 500 index of US stocks.

This higher profitability justifies a higher P/E ratio, at least assuming it stays that way. If it does then I estimate that Indian corporate earnings should grow by just under 11% a year, which would be extremely healthy. It’s also 6-7% above current Indian consumer price inflation.

Put another way, if the P/E stays at the current level then stocks will rise in price by almost 11% a year. Add in the dividend yield and Indian stocks look good for a 12% annual return. That sounds pretty attractive given that the long run return on US stocks has been 9.5% a year since 1900.

But there’s a catch. That 12% return is in Indian rupees. The rupee has historically been a relatively weak currency, losing value over time against the US dollar. Conditions are still in place for that to continue.

You see, India has weak finances. The government runs a budget deficit running to 4% of GDP. That’s a massive number for an emerging market to attempt to get away with. There’s also a huge trade deficit of over 6% of GDP.

India is a net exporter of services, not least because it has strong technology, consulting and offshoring sectors. These businesses provide services to customers all around the world. (I’ve seen some of them in action, first hand, and they’re impressive.)

Aside from services, India imports far more physical goods than it exports. This is underpinned by huge inbound shipments of oil and gold. (Indians love gold, which is one of the reasons you should own it. See here for more.)

The net result is the big trade deficit. To make the accounts balance the country is reliant on big capital investment inflows from overseas. These can be fickle, to say the least.

This means India’s stock market is highly volatile at times. A number of years ago I remember talking with an Indian fund manager. He told me that 80% of trading volume in Indian stocks was driven by foreign buyers and sellers.

When foreign investors get excited about India the money floods in and stock prices are bid to the moon. When sentiment turns negative, huge amounts of money are withdrawn and prices plummet in the waves of selling.

I’ll get back to that. First let’s look at how Indian stocks have performed in the past.

Since the end of 1992, its launch date nearly 24 years ago, the MSCI India index has returned 12.1% a year to investors – including capital gains and dividends (and compounded – meaning with profits on the profits).

Incidentally, and by chance, that’s the same as my estimated future return from a bit of number crunching (see above).

However, that was measured in Indian rupees. Measured in US dollars the annual compound return fell to 8.5%. That’s still not bad.

It’s a similar picture over the past ten and five years. Currency depreciation has hit returns for foreign investors. In fact it’s been worse than usual in recent years, which is not surprising given we’ve been going through a period of unusual US dollar strength.

This hit from a weakening currency is likely to continue in future. I’m pencilling in a drag on returns of about 4% a year, over the long run. That brings down expected future stock index returns to 8% when measured in US dollars – at a constant P/E and return on equity.

Not bad, but not stunning either (and there are usually fund manager fees to pay as well). Buying Indian stocks at this level is only for the ultra long term investor. Someone who’s prepared to buy and hold for a decade or more. Even then the returns are likely to be average at best.

But there’s another way. Remember how I said that Indian stocks collapse when foreign investors pull the plug? That means there are fantastic buying opportunities from time to time.

(For more on why price volatility is a great thing for private investors – if approached the right way – see here and here.)

Look at this chart of the MSCI India index over the past 24 years. 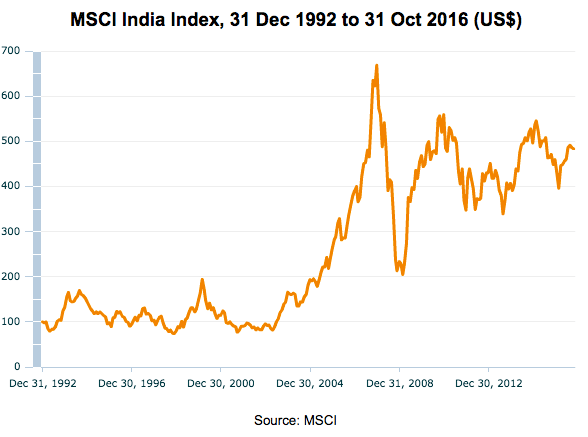 The overall trend has been up, but it’s been a bumpier ride than many markets. Along the way there were great buying opportunities in 1993, 1998, 2002, 2009 and 2013. That’s just after Indian stocks – and usually the rupee as well – had plummeted. Then they recovered. These buying opportunities seem to come around roughly every five years.

Indian stocks have been falling recently. But they’re not especially cheap yet. The local currency looks set to keep on weakening as well.

In other words, despite India’s strong economic growth, Indian stocks are far from being a screaming “buy”. But they’re certainly worth watching closely.

Next time foreign investors pull the plug on Indian stocks make sure you’re ready to buy – once the dust has settled. That time could be soon.