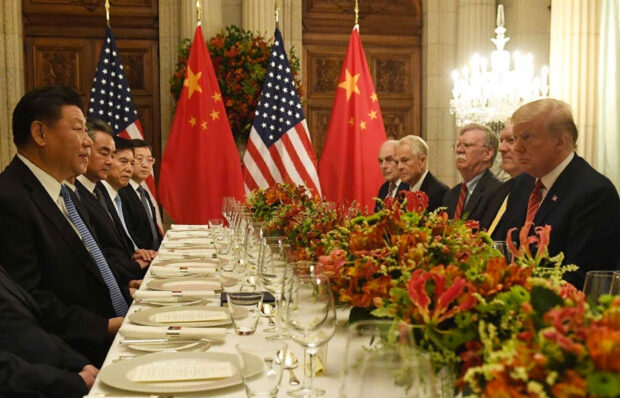 The horse has already bolted. But the stable hand hasn’t noticed, continuing to put faith in his ability to slam the stable door in time.

Which horse? What stable hand? I’m talking about China and the US, respectively.

Last week, we looked at how the US prevailed in the Cold War with the Soviet Union (see here). Economic might was the name of the game. Although, surprisingly, not a superior rate of economic growth.

Under the current US administration, relations with China have been heading for a cliff. It started with trade policy and expanded into a battle over technological supremacy.

The sudden burst of US trade protectionism against China makes little sense in economic terms (even less when applied to friendly places like the European Union, Canada or Mexico). Evidence suggests it will have little benefit in the US, other than garnering a few votes from the economically ignorant (see here, here and here).

So it has to be about something bigger. My conclusion is that we could be in the opening rounds of a New Cold War between the US and China, started by the US.

In my opinion, this is a huge strategic mistake. The standoff with the USSR ultimately bankrupted the latter. I believe a similar standoff with China would eventually bankrupt the US…or, at least, cause severe financial carnage.

This is because the situation is very different. First of all, China’s population is over four times the size of the USA’s. This gives it an instant and vast domestic market.

Sure, China’s population has already pretty much peaked at 1.4 billion. It will shrink over time, while the US is set to continue growing (albeit at a slowing pace). But the projections for the year 2100, at the start of the next century, are for something like a billion Chinese and 450 million Americans. China will still be twice as populous as the US in three generations’ time.

Second, China is no longer communist, at least economically speaking. This is a simple point that many people seem to miss.

Obviously, the Chinese political system isn’t an elective democracy. The single political party calls itself “communist” and there’s a high degree of social and media control. But make no mistake: the economy is firmly capitalist.

This combination of single-party rule with a capitalist economy must be what’s meant by “socialism with Chinese characteristics”. It’s socialist-style political control. But favouring capitalism, instead of repeating the obvious failures of socialist-style economics.

Okay, the Chinese government still controls certain strategic industries, such as energy or banking. But this is not that unusual. For example, Norway’s oil industry is majority state-owned. Most of the US mortgage industry is state-backed and effectively state-owned, in the forms of Fannie Mae and Freddie Mac.

China’s shift to capitalism really took off in the early 2000s (in case you missed it, see my recent article here). Economic growth was explosive, as the highly-entrepreneurial Chinese people were let off the communist leash.

China’s economy went from being just 11% of the size of the US in 1998 to 65% in 2018. Using purchasing power parity (PPP), which adjusts for different local price levels, the Chinese economy is already a quarter larger than the US, according to the International Monetary Fund (IMF).

Effectively, China already matches the US in terms of economic clout. If the current trade dispute is supposed to hold back China, then it’s far too late. That horse has already bolted.

Of course, China’s rate of growth has now slowed, and the trend growth is likely to slow further over time. This is perfectly normal as any under-developed economy reaches a more mature stage (see post-war Japan and Germany, or Taiwan and South Korea since the 1960s).

With that in mind, let’s do a thought experiment. What if China’s nominal economic growth averages 8% a year in the near future, measured in US dollars? That’s 6% real growth plus 2% for inflation. At the same time, what if the US averages 4% nominal growth, being 2% real and 2% inflation? The actual future outcomes will be different. But those are realistic, ballpark figures.

At those growth rates, the Chinese economy would match the US economy for size in 2029, just 10 years from now. Given that, it’s difficult to see how the US can hope to subdue China, or outspend it in any military stockpiling.

Here’s a chart of the progression of Chinese and US GDP under those assumptions, starting in 1998 and looking out to 2049:

It shows how China’s economy went from a low level in the late 1990s into rapid catch up…and how it’s likely to overtake the US in the 2030s.

The next chart shows China’s GDP as a percentage of the US, both in the past and the (possible, probable) future.

The US government is always going to see China as a rival. That’s natural. But going a step further, and making an enemy of China, would be a huge strategic mistake. Just as alienating post-Soviet Russia over the past 20 years was a huge strategic mistake. That resulted in China and Russia becoming close strategic allies, despite being historical enemies. (I note that Xi Jinping is currently on an official state visit to Moscow.)

Economically speaking, China is already huge and firmly capitalist. Any US standoff with China would not be a rerun of the Cold War with the USSR. That’s because the USSR had an economy that was both much smaller than the US and run along centrally-planned, communist lines.

Like it or not, I believe that the US wouldn’t be able to keep up in a new Cold War with China. The end result would be great economic hardship, and possibly financial ruin.

So what should the US do instead? Of course, everyone expects it to look after its own interests. But enlightened self-interest first requires self-awareness. When it comes to China, getting into trade wars and military sabre rattling won’t help in the long run.

Instead, the US should look for common ground with China, where the two countries can work together. Oh yes…and stop taking steps to alienate traditional or natural allies (EU / Germany, Canada), or find ways to boost relations with them (such as a fair, post-Brexit trade deal with the UK).

Earlier this week, an official document was released by the Chinese State Council. That’s the centre of political power in China, similar to a cabinet or politburo.

The document made it clear that China is keen to have constructive relations with the US, but that the former will also be resolute. Attempting to bully China simply won’t work. The following short extract pretty much captures the tone of the document:

“China has been consistent and clear on its position, that it hopes to resolve issues through dialogue rather than tariff measures. China will act rationally in the interests of the Chinese people, the American people, and all other peoples around the world. However, China will not bow under pressure and will rise to any challenge coming its way. China is open to negotiation, but will also fight to the end if needed.”

Has everyone got that? I think it’s crystal clear.

Any US attempt to hold back China might win a few stateside votes…or create some drama to prop up the sliding ratings of corporate media…or justify even more bloated military budgets.

But any dream of fundamentally crippling China is a pipe dream…a delusion. At least, without the US doing serious self-harm along the way. The harsh realities of economics say it won’t work. China is simply too big and already too advanced.

Still, self-delusion is often more comfortable than reality. Unfortunately, this situation has plenty of potential to get much worse in the coming months and years. Buckle up.

AsiaChinaEconomic CrisisGDPGovernmentRussia
Previous ArticleCan the US win a Cold War with China? (Part I)