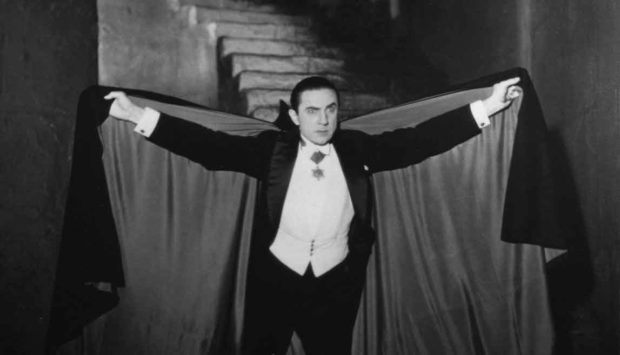 No valuation ratio is perfect. All have their pros and cons. But one of the usually more reliable ones – at least for assessing long-term future investor profits – is the Cyclically Adjusted Price-to-Earnings ratio, or “CAPE”. However, there’s a particular situation where is can give an inflated reading, falsely signalling that a market is more expensive than the reality. China provides a good example.

Probably the most common valuation ratio used in the world of stocks is the price-to-earnings ratio (P/E). This divides the price of a stock by the earnings per share (EPS). Or the market capitalisation of a whole company is divided by the net profits of that whole company, to give the same result.

The problem with P/E is that the “E” can be volatile. Earnings can collapse in a recession or financial crisis, often more than stock prices. This sends the P/E rocketing higher, giving a false signal that stocks are expensive, even though it may be a great buying opportunity.

One solution to this is the CAPE ratio, also known as the Shiller P/E (after Yale professor Robert Shiller) or the PE10. It’s an attempt to smooth out the short term swings in earnings to show average earnings power through the business cycle.

To do that the “E” part of the equation is modified. The first step is that all the EPS figures for the past 10 years are adjusted for inflation between when they were generated by the company and the present day. That means they’re expressed in today’s money, meaning current purchasing power.

For example, if EPS was $10 five years ago, and inflation averaged 3% a year (compound) in the intervening years, that data point would be adjusted to $11.59.

Once this has been done for all of the past 10 years of EPS, an average is calculated from the results. This can be thought of as the normalized earnings power, expressed in today’s money.

The last step is simple. Similar to a normal P/E, the inflation-adjusted average EPS is divided into the stock price to give the CAPE ratio.

The CAPE ratio won’t give you any clues as to where the market is going to in the short run. Markets can do anything over short periods.

CAPE in the US market

These days the S&P 500 index of US stocks has a CAPE ratio of 32.02 (using data from multpl.com). It’s only been higher on two occasions throughout the US stock market’s long history, with data back to 1871.

The first occasion was in September 1929, when it reached 32.54. Which is to say it was 1.6% higher than today immediately before the devastating Wall Street crash of that year.

The other occasion was longer lived, during the 1997 to 2002 tech bubble. Then the CAPE peaked at a staggering 44.2 in December 1999, just before the massive tech crash.

A chart follows which I last updated in August. It takes all the monthly CAPE readings since 1881 and orders them with the lowest on the left and the highest on the right.

It shows how the US market is now trading well within the top 3% of all monthly readings for the CAPE ratio. The only change since August is that the red dot (the present) is now practically on top of the yellow dot (September 1929). 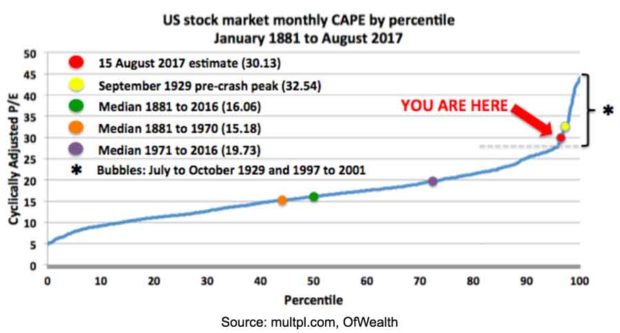 Given the very few times when the CAPE has been higher, and given how the line goes vertical on the far right of the chart, I believe this is clear evidence that US stocks are already well into bubble territory. (See here for more analysis and explanation, including some of the criticisms of CAPE.)

But the US isn’t what I’m concerned with today. It’s a mature market, and the CAPE is just one of many signals that the market is pricey.

Instead, I want to look at a situation when CAPE can definitely give a false reading. I was reminded of this in my recent analysis that identified the currently cheapest (Russia) and most expensive (Denmark) stock markets in the world (see here and here).

That was because it looked like there was anomaly in the figures for one particular stock market: China.

Using figures from Star Capital, I ranked 39 countries using six valuation measures. Those ranking 1st were the most expensive on each measure, and those ranking 39th were the cheapest. Here’s how China looks: 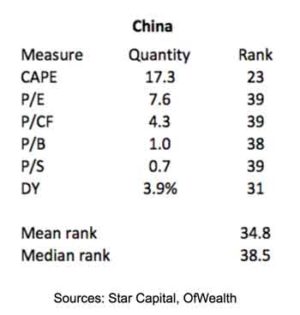 China looks extremely cheap on four measures, and well into the cheap range on a fifth (dividend yield). However, the CAPE tells a different story, apparently putting China in the middle of the pack of 39 countries. Which means that measure is neither signalling that China is cheap nor expensive.

The key here is the rate of historical profit growth. It’s well known that China has had phenomenal, exponential economic growth over the past couple of decades. Wages and consumer spending have grown even faster than GDP. It should therefore come as no surprise that Chinese company profits have grown extremely fast as well.

I’ll use examples to illustrate what I think is going on, and why the CAPE is inflated relative to the other market valuation ratios. I’ve run two sets of numbers for imaginary stock markets that currently have a low P/E of 10.

In a mature market, a reasonable expectation is for underlying EPS to grow about 1% above inflation. Past analysis I’ve done shows this was the case for the US market between 1900 and 2005 (stripping out the increasing effect of stock buybacks since the early 1980s).

This means that in a mature market, where we can perhaps expect inflation at 2% a year in future, EPS will grow at 3% a year once we add the 1% real (above inflation) growth rate.

Applying those rates to the example, I’ve calculated past EPS figures. Then I’ve worked out the inflation-adjusted EPS figures as inputs into the CAPE ratio. For example, with EPS at $10 today it would have been $7.66 ten years ago, which increases back up to $9.16 once 10 years of inflation is added back.

Now let’s change the parameters a little. The figures I’ll use are just for illustration, but probably in the kind of thing seen in China over the past decade. What happens when we increase EPS growth to 15% a year, keeping inflation at 2%?

The EPS 10 years ago would now start at a much lower $2.84, which is equivalent to $3.40 once the intervening inflation is added back. “E” for the CAPE now comes in at a much lower $6.18 (the average of all 10 previous inflation-adjusted EPS figures).

Bottom line: CAPE can be misleading when applied to stock markets that have experienced very high EPS growth over the past decade, such as China.

This means that the Chinese market is probably extremely cheap, using Star Capital’s figures. The trouble is, I can’t work out which specific Chinese market indices – of which there are many – they’re referring to (although I’ve asked for clarification). None of the China stock indices or ETFs I’ve looked at comes close to those valuations.

In the meantime, the CAPE remains one of the best valuation ratios for identifying whether a stock market is relatively expensive or cheap. Just remember that it can be misleading in high growth situations like China.

ChinaEmerging MarketsInvestment StrategyLong Term InvestingStocksUSAValuation
Previous ArticleIs this the most expensive stock market in the world?Next ArticleWhat did we learn in 2017?