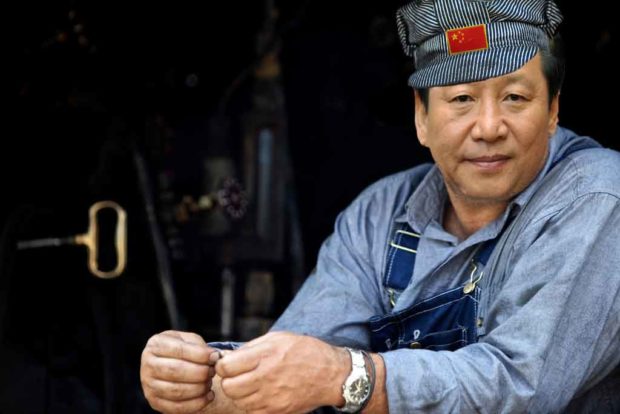 China has a global, multi-decade mega project. Even if you’ve heard of it before, the chances are you don’t know how massive and far reaching it’s already become. It has a slightly strange name – the “Belt and Road Initiative” (BRI). But there’s nothing strange about the aims: enhanced global trade and greater Chinese influence. Understanding the staggering ambition of BRI, and how it contributes to the massive ongoing shift in global wealth and power, is essential information for all investors.

The original “Silk Road” refers to those ancient trading links that traversed Central Asia and the Middle East, linking China with Europe. One of the legacies left to this day is the muslim quarter found in the ancient, walled city of Xi’an, deep inside central eastern China.

(Xi’an also has the only traditional Chinese city wall that’s still complete. Also the famous Terracotta Army, which is about 2,200 years old and was first discovered in the 1970s, can be seen nearby. I certainly recommend Xi’an for a visit if you’re ever in China.)

Originally it was known as the “New Silk Road”, after the ancient trade routes. Then the modern plan’s name change to the “One Belt, One Road” (OBOR) initiative. Now the Chinese want it to be known as the “Belt and Road Initiative” (BRI).

Put simply, this is infrastructure on an unprecedented scale. The most ambitious plan to link human populations ever conceived. When the history books are written a hundred years from now it’s likely to put the 19th century achievements of imperial, British engineers in the shade.

And who’s leading it? None other than Chinese President Xi Jinping. It’s one of the cornerstones of his plans. (Note: “Xi” is pronounced more or less like the English word “she”.)

A lot of people have a vague awareness of this grand plan, which was first announced in 2013. And if they do they tend to think it’s all about improving trade links between China and Europe via road and rail.

That’s certainly part of what’s going on, but it’s far bigger than that. This is complex and global. At a high level I’ll show you just how far the plans really go, with the help of some maps.

What’s BRI all about?

But first, what is the BRI? According to Xi the idea is to promote a “community of shared future”. China is doubling down on economic globalisation, even as some of the other main beneficiaries are having their doubts. The “belt” in the name refers to trade routes by land, the “road” (somewhat oddly) refers to trade by sea.

China’s organising the investment of huge sums of money in roads, bridges, ports, railways, power plants and pipelines. The aim is to promote industrialisation and modernisation, both at home and abroad.

The Chinese government wants to develop the country’s poor interior and also boost China’s foreign trade and influence. Just as China’s financial system is slowly opening up to foreigners (see here for latest developments in the Chinese stock market), China is extending its reach into the rest of the world.

The proposed plans are said to include 65 countries. Between them they have 66% of the world’s land mass and 75% of known energy reserves. Those countries have a population of 4.4 billion people, nearly two thirds of the world. They make up 29% of the global economy and a quarter of global trade.

Overall, the whole thing is expected to take 30 to 40 years to implement fully. There’s conflicting information about what this is all going to cost. But China’s already committed hundreds of billions of dollars of government funds.

Additional funds will mostly come from two relatively new, Chinese led organisations. These are the Asian Infrastructure Investment Bank (AIIB) and the New Development Bank (NDB), both launched in early 2016. On top of the capital injected by shareholder countries, these banks can issue infrastructure bonds or preference shares to investors to fund loans to pay for the investments.

It’s hard to get figures on how much will be spent overall. One expert I asked said: “In truth, no one knows.” PwC, the accounting and consulting firm, estimated that China alone will make around US$1 trillion of overseas investment in BRI over the next decade.

Add the investments at home in China, and investments from other funding sources, and the total costs are likely to run to many trillions of dollars. Last year alone there were new BRI projects announced amounting to US$400 billion, again according to PwC.

Now let’s turn to where this is actually happening. I’ll start with the main core of it all, the routes that have one end in China. Here’s a high level map of the various branches. 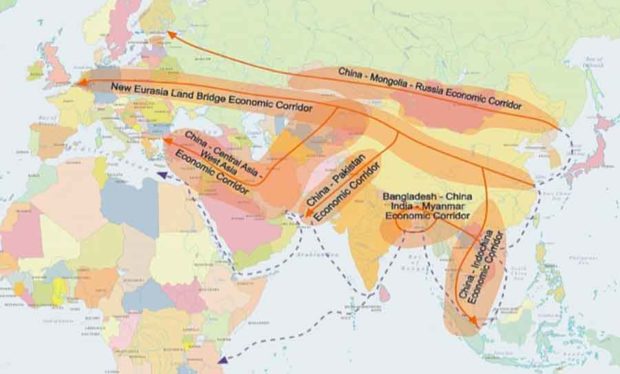 You can see straight away why they had to change the name. There’s far more than “One Belt One Road”. This thing has many elements.

There are six main land routes shown on the map, and countless sub-routes and branches. Even this only slightly expanded version of the main routes already shows considerably more complexity. 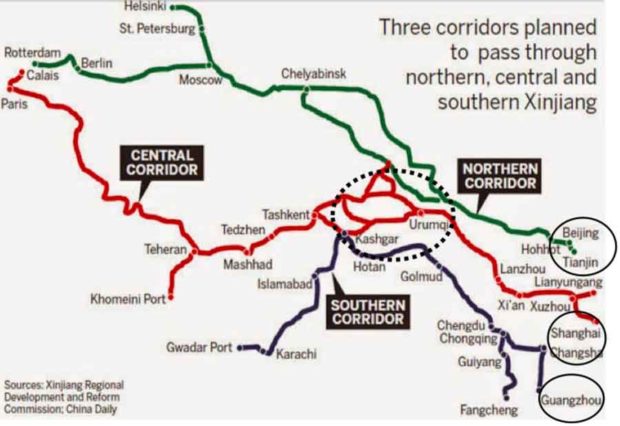 Obviously this isn’t going to be plain sailing. The planned routes go through many countries, and some of them are geopolitical hotspots.

For example, India isn’t happy about the China-Pakistan Economic Corridor, because it fears it could affect India’s claim to disputed parts of Kashmir. As a sign of protest India boycotted the May 2017 BRI conference in Beijing, which was chaired by Xi Jinping himself.

Mind you, none of that stopped both India and Pakistan joining the (Chinese led) Shanghai Cooperation Organisation (SCO) at its annual June summit. To see such rivals welcomed into a political organisation at the same meeting is extraordinary, and another sign of China’s growing clout.

Other members of the SCO are China itself, Russia and four Central Asian “stans” (Kazakhstan, Uzbekistan, Kyrgyzstan and Tajikistan). There’s talk that Iran and Turkey will be next to join.

Speaking of Iran and Turkey, one of the BRI corridors is meant to go through both of them. And the route skirts around the top of Afghanistan, where the US just sent 4,000 more troops, via some other “stans”. Plus it’s all very close to Iraq and Syria, those current hotspots of confusion.

In this light, the motivations for all those wars in the Middle East start to make more sense. In the 19th century European powers – including Britain, Germany and Russia – played the “Great Game” for control of Central Asia and the Middle East. Nowadays it’s the US and allies (Saudi Arabia, Israel, UK etc.) vying for influence with China and allies (principally Russia and Iran).

Anyway, whatever the short term problems with sections of the route, this is a multi-decade vision that China’s pursuing. Even if parts don’t get built straight away, much of it’s already happening. The big pieces linking China to Europe via the “stans” and Russia are relatively straightforward, at least in political terms.

There’s some resistance from the European Union concerning trade terms, but it can most likely be resolved. In any case, the first freight train to travel all the way from Yiwu in eastern China to London in the UK made the journey in January this year.

The distances involved in all of this are vast. From Yiwu on China’s east coast to Duisberg in Germany is almost 9,000 km (nearly 5,600 miles), if you went by the shortest possible route. By comparison, the shortest distance between Boston to Los Angeles in the USA – from the north east to the south west of the country – is almost 4,200 km (2,600 miles), or less than half as far. The US built some great railroads once. China is building bigger ones now.

As if this wasn’t enough, there’s a global angle too. It’s a detail that’s usually missed, except by the most avid of China watchers. For example, look at this trans-African railway, which links to the BRI maritime route into east Africa… 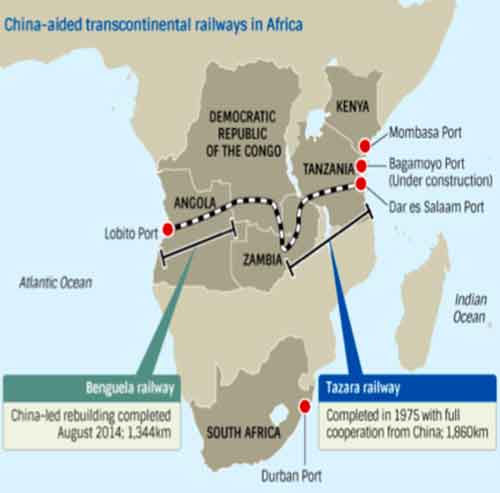 ….or this rail route across South America, through Brazil and Peru…. 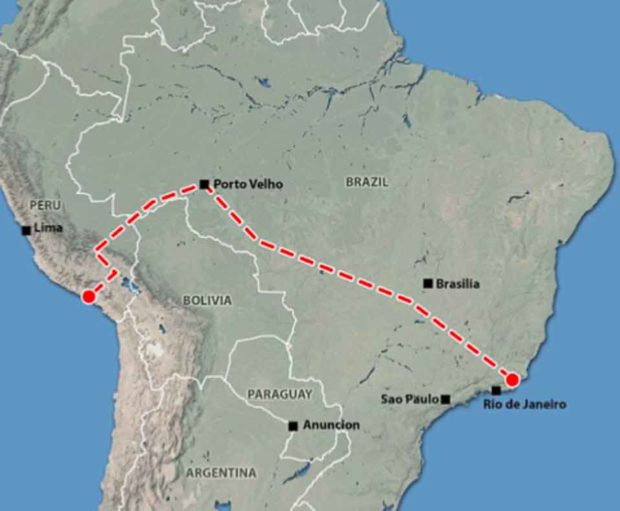 …or plans to build a new shipping canal through Nicaragua, to compete with (or complement) the Panama Canal… 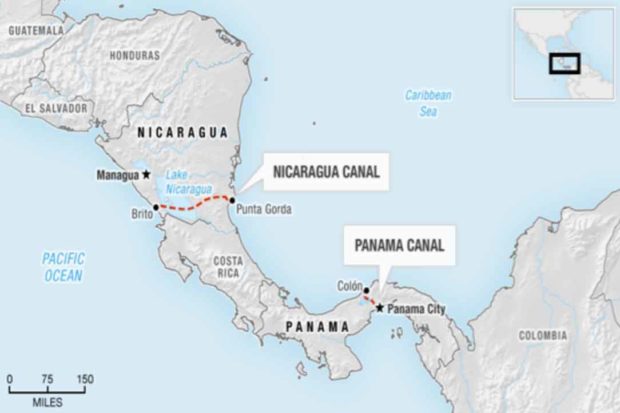 These are all projects supported and/or built by the Chinese. There’s even wistful talk of one day building a tunnel under the Bering Strait, thus linking Siberia with Alaska.

Of course, that last part sounds fanciful given the current political climate in the USA. But a lot can change in a decade or two. After all, even the French and British – traditional enemies if ever there were – eventually managed to build a tunnel linking their two countries. 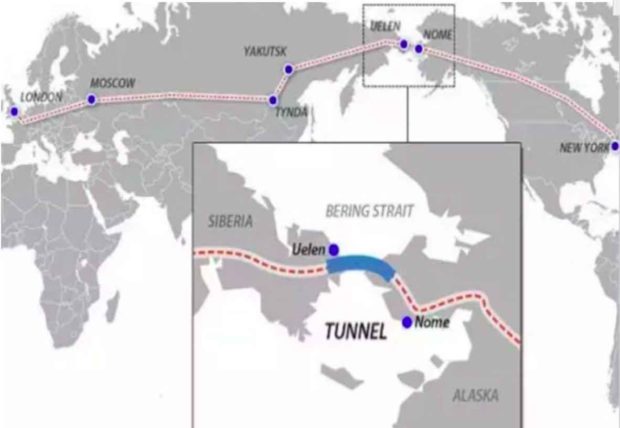 Put this all together and the scale of ambition is just staggering. China’s plans are much bigger than simply stimulating the economy in its interior, or boosting trade with neighbours.

This is a grand plan that links the world, boosts global trade, and…of course…extends China’s influence around the world. This is strategic with a capital “S”….long term vision writ large.

As the Belt and Road Initiative continues to expand it’s likely to spur economic growth in many places. Companies that get the contracts will benefit straight away. But improved infrastructure in these many countries will benefit all sorts of businesses and communities in ways that are hard to predict. Stand aside NGOs. China has a real plan to reduce poverty.

This is definitely one to watch. It’s only four years since China made this multi-decade plan official. Over time, more and more of the grand outlines will be refined and turned into on-the-ground specifics.

The world is changing fast. The centres of wealth and power are shifting. So are the attractive investment opportunities. China’s Belt and Road Initiative is just one part of a bigger shift. But it’s an important one to know about. I’ll certainly be keeping an eye on it.