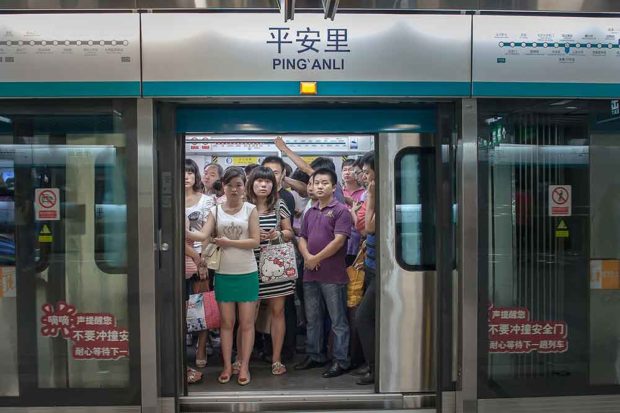 It finally happened. After many years of near misses, index provider MSCI has finally agreed to include certain domestic Chinese A-shares in international indices, including the MSCI Emerging Markets index. This is an important first step, but not yet as big a deal as some of the hype suggests. However, all investors should understand the future implications of A-shares going international. Also, an analysis follows of what’s actually being included in the international indices.

China has vast but complicated stock markets. In fact everything in China is vast and complicated, as I learnt in the early 2000s when I was negotiating joint ventures in China for UBS Group, the investment bank and wealth manager. Although, admittedly, the securities markets were much, much smaller back then.

In fact, if you add together the market capitalisation of stocks traded in Shanghai, Shenzhen and Hong Kong, you discover that China markets are already the world’s second largest (for more see “How long until China’s stock market overtakes the USA’s?”).

On the other hand, the value of the stocks that can actually be traded – the “free float” – is much less. Many companies are still controlled by the government – especially big ones in strategic industries like energy and banking.

So what are Chinese “A-shares”?

Today our focus is on A-shares. Mainland China didn’t have stock markets after the Communist revolution in 1949, but reopened them in 1990. You’ll find more about the history, and the nature of the market, here.

The A-share market is still growing up – a petulant teenager if you like. There was a massive bubble in 2007 and a lesser bubble in 2015. Government intervention in the market is frequent and even more blatant than in the US or Europe. (What else is QE if it isn’t market intervention?)

Here’s a chart of the Shanghai Composite index since it got started (in local currency). 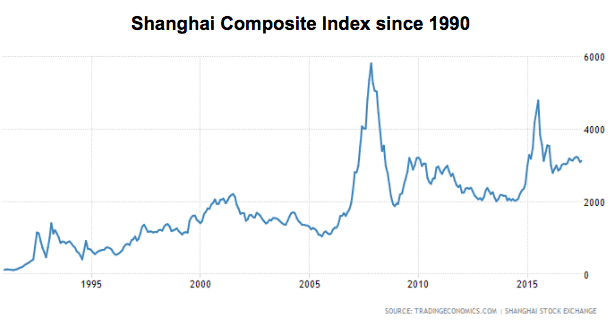 You can clearly see the two bubbles and busts. On the other hand the overall trend has been steadily upwards over time. It’s up about five times in the last 20 years. Which, in fact, is only about 8% a year (plus modest dividends).

In other words, investor gains have been (perhaps) surprisingly little for an economy that grew more than four fold over the past decade. Huge amounts of new capital were raised over time, funding rapid business expansion and leading to a much bigger stock market overall. The net result is that investors have done quite well overall, but certainly not staggeringly well.

For practical purposes renminbi and yuan are the same thing and can be used interchangeably. I tend to use “renminbi”. That’s because when I used to work in China that’s the terminology that was used by people on the ground. If in doubt, go with the locals. (Also, 1 yuan equals 10 jiao or 100 fen. It’s like dollars, dimes and cents in the US.)

China’s been classified as an emerging market for some time. But domestic A-shares weren’t included in international stock indices before. That’s because there were restrictions on investment by foreign investors. It was only other types of Chinese shares included in the MSCI Emerging Markets index and MSCI China index (among others).

The restrictions on A-shares have slowly been relaxed over time. MSCI has now decided to start including some of them in international indices.

Specifically, from June next year (so there’s time to prepare), 222 A-shares of large cap stocks will be included in the MSCI Emerging Markets index and other international indices that contain Chinese stocks.

That sounds like a lot. But in fact if it happened today they’d only make up 0.73% of the MSCI Emerging Markets index. The total market capitalisation of the companies is US$3.8 trillion. But only US$697 billion of value will be eligible for the international indices at first. That’s partly because the free float is smaller than the market capitalisation, but also because there’s only so much liquidity in the market. Over time it’s likely to increase.

Other Chinese shares are already well represented in international indices. But, as these charts from MSCI show, A-shares will initially add only a sliver to the investor pies. 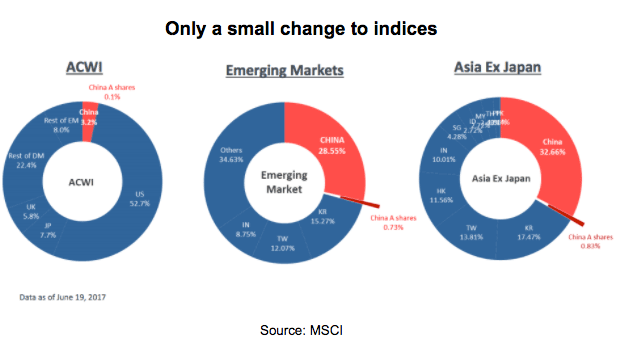 Mutual funds and ETFs that track the MSCI Emerging Markets index or similar – or are “closet trackers” (pseudo-active managers) – will no doubt put a bit of money into the approved A-shares. An analysis by KraneShares estimates that this will amount to just $12 billion, compared with US$7 trillion for the A-share market as a whole.

Clearly that’s not much, and isn’t likely to move the market needle a lot. But it’s only a first step. Remember, the anticipated 0.73% weighting in the MSCI Emerging Markets index represents only a small piece of the total free float of the 222 eligible A-shares. Plus all small- and mid-cap A-shares are excluded completely for now.

In five to ten years it’s perfectly possible that A-shares will make up 15-20% of the MSCI Emerging Markets index. China’s overall weighting – including H-shares and the like – could end up over 40%.

In other words, the initial change is little more than symbolic. But in future there could be huge foreign buying of Chinese A-shares. Of course, this will also leave A-shares exposed to huge outflows when investors pull money from emerging market index funds. That’s when the funds become indiscriminate sellers. Although, as usual, that will leave tasty opportunities for bargain hunters.

Another thing to note is that the MSCI China index, which is well established already, will increase from 152 stocks to 423 stocks. That will make it much more diversified. The 222 approved A-shares will be added, plus some others from other Chinese share categories.

A new international A-share index, and what’s in it

MSCI has also produced (on 21st June) the list of the 222 shares. These will be included in a new index currently called the MSCI China A International Large Cap Provisional Index. It’s likely that new funds will be created to track it.

I’ve analysed the list to see what it looks like on a sector view. This chart shows the breakdown by value (market capitalisation). 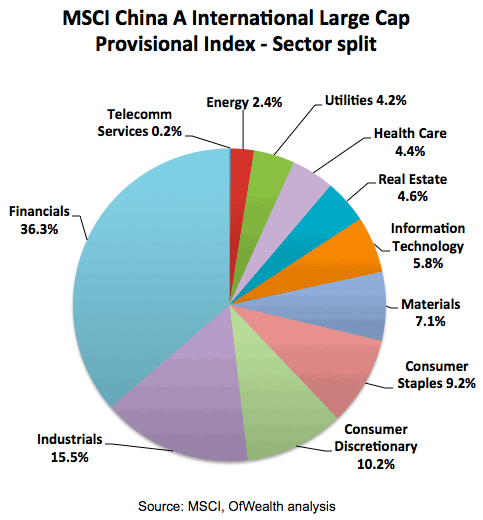 You can see that it’s pretty well diversified except for a major allocation to the financial sector. This is made up of second tier banks (outside the dominant “big 4” – see here for more), securities brokers and insurance companies. Here’s the same chart, but breaking down the financial sector into those three sub-categories. 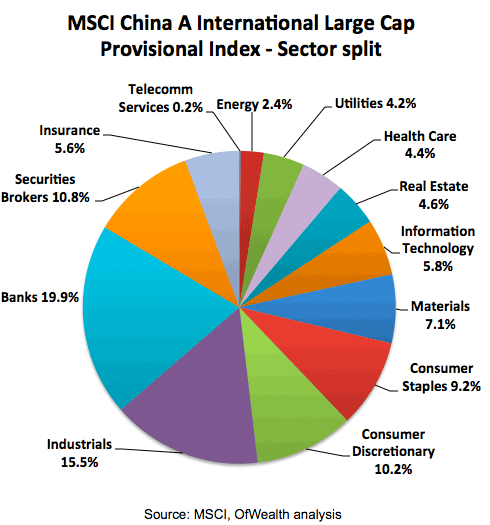 China already has a vast economy and a massive financial system. But much of the latter remains closed to the rest of the world, or simply off the radar. This latest development is an important extra step towards making China’s financial system more global, and increasing foreign investor interest in China’s domestic securities markets. China continues to slowly open its doors to the world.

That said, in the short term at least, it doesn’t really change much at all. But all serious investors need to keep an eye on China’s ever-growing role in the investment world. As China – the world’s still new economic powerhouse – welcomes more and more foreign investors, there are bound to be plenty of opportunities for future profit.