Over the past 150 years or so, today’s developed countries achieved their lofty status. Incomes and standards of living rocketed higher, as lives became easier and longer. But can this continue at the same pace? Or have we already harvested the low hanging fruit of better living? And, if the latter, what does it mean for investors?

There are clear headwinds in the developed countries. Populations are ageing. Debt burdens are huge. Taxes are high. Burdensome government regulations poke their intrusive tentacles into more and more aspects of our daily lives.

So much seems fairly clear, at least to me. But an email exchange with an OfWealth reader got me thinking more deeply about it.

The reader, Robert S., had this to say (this is a short extract):

“The past two centuries, the industrial revolution, mark a unique time in human history. Part of it was progress in science and engineering. That progress came at a huge price: The depletion of vital resources.

So it is by no means assured that positive growth rates can be realized in the future.”

Robert could be right about the depletion of natural resources. To take an example, if it ever takes more energy to produce a barrel of oil than we get from the barrel then it’s game over for oil. It’s not like the stuff is bubbling out of the ground anymore.

But his comments got me thinking more generally about what causes economic growth. Specifically about rising productivity – being able to produce more with less effort – and the increased living standards that accompany it.

I recently came across a 2012 paper by Robert J. Gordon for the Centre for Economic Policy Research. He’s a professor at Northwestern University in the USA. The paper, called “Is US economic growth over?”, had been sitting on my reading list for a few weeks. I decided it was time to get on and dive in.

Is US economic growth collapsing?

Gordon’s basic idea is that the high growth rates of the past were caused by unique factors that can’t be repeated. In turn they are being replaced by headwinds, which could lead to much slower growth in the future.

He starts by looking at the growth of real GDP per capita, which strips out the effects of price inflation and population growth. Here’s a chart of how it looked through history (it uses the UK, in blue, from 1300 to 1906 due to better historical data, and then the US, in red, from 1907 to 2007) 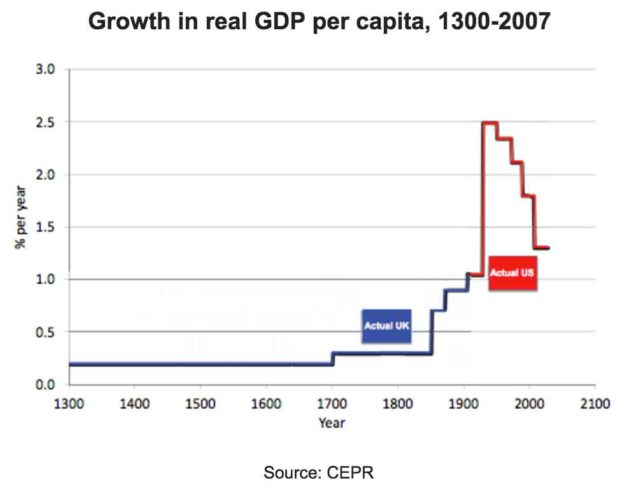 Clearly you can see that not much happened for the first 400 years, with average growth of just 0.2% a year. Then things picked up in the 18th century, accelerated in the second half of the 19th century, rocketed in the middle of the 20th century, and have since dropped sharply to levels last seen a century ago.

Obviously this is tied in with the various industrial revolutions. The first one, from 1750 to 1830, saw inventions like steam engines, cotton weaving machines and railroads. The second one, from 1870 to 1900, brought along electric light, fresh running water, the telephone (replacing the earlier telegraph), the phonograph, the internal combustion engine and motion pictures.

By the late 1920s these were motorcars, trucks, planes, elevators, electric machinery, drains and sewers for waste, radios and roads. These were followed by television, washing machines, jet engines, and all sorts of other useful things.

The third revolution is the technology age, which we’re still immersed in. Gordon argues this started in the 1960s, as computers and electronic calculators began to replace typewriters, written ledgers and so on and so forth. The advent of the internet, from the mid-1990s, clearly speeded things up.

That’s a lot to unpack. But Gordon’s main point is that a huge amount of what those past innovations achieved was unique. New innovations will struggle to make such big changes to our lives, our productivity, and our standards of living. There will still be economic growth. It’s just that it may be much slower.

He gives some examples to make the point. In 1870 houses had no running water and no sewers. Housewives spent a huge amount of time fetching water and removing human waste. Gordon reckons that there was nothing more important than running water and indoor plumbing for the liberation of women. I think he may have a point.

How about travel? Long gone are the days of slow, horse-drawn carriages and omnibuses. Nowadays we whizz about in cars. Yes, some of them are moving over to electric power. But the speed limits remain the same.

Cars, trains, planes – they all quickly increased our velocity of travel. But a combination of physics (wind resistance), an increasing need for fuel efficiency and the long arm of the law means there’s little room for further improvement in terms of speed.

More recently we’ve had all sorts of other inventions, such as smartphones, Facebook, iPads and so on. Each has their uses and charms. But Gordon reckons these are not nearly as revolutionary as earlier technologies like running water and trains.

Only very serious fans of posting photos of their lunch, or doing online shopping, are likely to choose the latter option. The point being that earlier inventions – that we now take for granted – were much more useful and revolutionary.

Six headwinds for the future

Gordon then goes on to outline six headwinds to future growth in the US. In short they are as follows (embellished by me, and equally applicable to other developed countries):

Gordon himself cautions against future predictions of doom. He gives examples of previous pessimism about innovations that turned out to be wildly wrong.

For example, an internal memo at Western Union from 1876 said: “The telephone has too many shortcomings to be considered as a serious means of communication.” How wrong they were. On the other hand Gordon reminds us that we still don’t have flying cars, a common expectation in the 1950s. The optimists get it wrong too.

In the end – given the headwinds and the unrepeatable “easy wins” of the past – he reckons there’s a case for a collapse in US growth. Gordon thinks it could go all the way back down to 0.2% a year by the end of the century – which is back to the levels before the first industrial revolution.

That may seem extreme. But even if it’s half right it will be a big shift compared to what we – and our parents and grandparents – have been used to during our lives.

The good news is that, even on that assumption, US real GDP per capita would still double from here by 2100. Here’s the chart of the past and a possible future (UK actual in blue, US actual in red, US hypothetical in green): 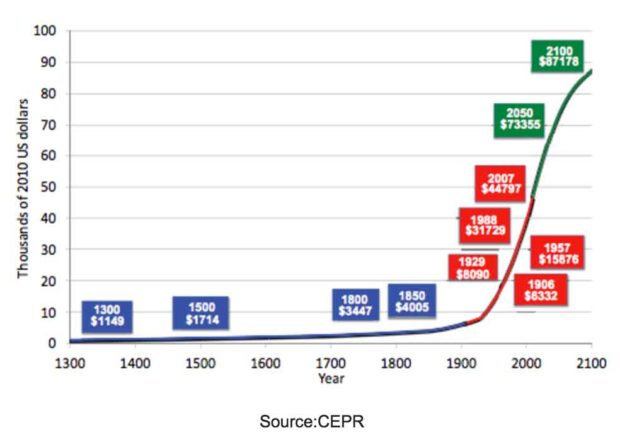 Clearly, even if US growth rates keep collapsing in the future – and in other developed countries – life won’t be all bad. In fact it should keep getting better, as the power of compounding keeps working its magic.

All of this is also a reminder of something else. The big growth today is going on elsewhere. The low hanging fruits of productivity growth are still being picked in other parts of the world.

I am, of course, talking about the world’s emerging markets. Or at least the ones where nuttier political and economic ideologies have been consigned to the past. And that’s why I’m still convinced that their stock markets will continue to outperform developed markets in future (see “The best places to own stocks” for more).

Is the collapse of US growth inevitable? Or any other developed country? We have no way of knowing. But, for now, there are good reasons to believe that growth will remain faster in the emerging markets – with the inevitable ups and downs. I recommend that you invest accordingly.

[Endnote: For those of you interested, you’ll find the whole of Robert J. Gordon’s paper here.]