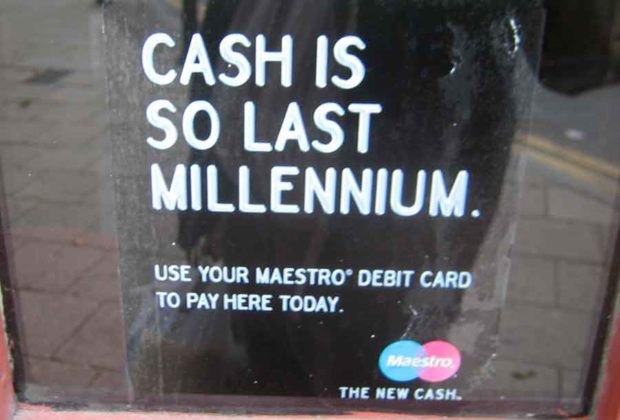 You’d think that any coins and notes that qualify as “legal tender” would be widely accepted in the country where they qualify. However, a conversation at the weekend highlighted at least one case where this isn’t true. Amazingly, or perhaps not, the country in question is a leading member of the eurozone.

A friend of mine, a successful businessman and investor called Miguel, has just returned from a trip to Europe. He’s in his 70s and has lived in Argentina since he was a small child. As such, he likes to carry cash and pays with it a lot of the time.

Unlike most people in developed countries, who tend to be complacent about such matters, Argentines know not to trust the government. That can mean either today’s actual government or the future’s many potential ones. As such, Argentine’s value the privacy and immediacy of cash – if not always their own country’s cash pesos.

Argentina has a long history of political, economic and financial crises. This makes people wary, and ready for the worst. When the roads are blockaded, and the lights go out, and the banks slam down their shutters, those with cash know that they can carry on.

(The same is true when natural disasters strike – or wars. Strange as it may sound to academic economists and government policy types, all forms of electronic payment cease to function if there’s no electricity. That’s whether they involve payment cards, phone apps, online bank transfers or crypto currencies like bitcoin. Cash is king in these situations. Just ask the people of the many islands recently devastated by hurricanes in the Caribbean.)

Miguel was off to Europe. He has plenty of credit cards, but he’s experienced enough to know that they sometimes get rejected – especially if issued in Argentina. So he did what he’s always done. He packed some cash.

It’s totally normal for people in Argentina to have wads of high denomination notes. All my American friends here tell me they’d never seen a 100 dollar bill until they came to Argentina. Here they see them all the time.

Part of Miguel’s trip would be to a country that’s a member of the eurozone, so he decided to take some euros. In turn, when he went to change money, he was given some 500 euro notes. He thought nothing of it, except how convenient it was to have such a space-saving, high denomination.

(Note: “Europe” includes 50 countries. The “European Union” is a subset of that which includes 28 countries – and 27 once the UK has left. For its part, the eurozone includes 19 countries within the EU.)

The 500 euro note has been around since 2002. It’s always been a little controversial, since its worth much more than the largest notes in most other major currencies. After all, 500 euros is equivalent to US$585 at the current exchange rate, whereas the largest dollar bill is only US$100.

It’s said that the 500 euro note makes life too easy for the world’s shadier characters to move around their ill gotten gains. With this in mind, the European Central Bank (ECB), announced on 4th May 2016 that it would phase it out.

Specifically, the ECB said that the 500 euro note “could facilitate illicit activities”. But the same could be said of many everyday things. Such as warehouses, trucks, computers and politicians. Yet I haven’t heard any plans to phase out any of those (although the last one has a great deal of appeal.)

In any case, that was the case that was made. The plan was to stop issuance of new 500 euro notes by the end of 2018. But the ECB was explicit that they would remain “legal tender” for the time being. You’d think that would mean it should be accepted as payment, and easily exchangeable at any commercial bank.

Which brings us back to Miguel. He set off to Europe with his legal, ECB-administered money in his wallet. Part of the trip involved a stay in the land of his birth, Spain. That country being one of the largest economies in Europe, and an original member of the eurozone since it was set up on 1st January 1999.

At that time the national currencies of eurozone members – in this case the Spanish peseta – continued to exist until 1st January 2002, when physical euro notes and coins were introduced. That was when Spain first banned its own money. But there’s a modern twist.

Miguel arrived in Madrid, the Spanish capital city. This is important to note. He wasn’t in some rural backwater, where you might expect certain things not to function.

It was a Friday and he knew he’d need some smaller notes for the weekend. It’s difficult to pay for a coffee or a meal with a 500 euro note, as few places carry that kind of change. So he did the obvious thing. He went to a bank to get some smaller bills. He took his passport in case he had to produce identification.

Being a Friday, and given that the banks close in the mid-afternoon, there were a lot of people queueing to get to the counters. After half an hour he got to the front and told the cashier that he wanted to change a 500 euro note.

Miguel was disturbed by the answer. Despite this being a branch of one of the biggest banks in Spain (or Europe, or the World), he was told they couldn’t accept a 500 euro note. He asked if there was another place he could try. The cashier recommended another bank.

So Miguel set off for the next bank. This was some kind of government owned entity, although I forget the name. He was running against the clock, before they closed for the weekend, but made it just in time. Miguel approached the counter.

He got the same answer. We can’t change a 500 euro note. We can only accept them if they’re paid into a bank account. The customer can then make a withdrawal from that account in smaller notes.

Clearly, this answer was no use to a temporary visitor to the country. Getting rid of the 500 euro note is supposed to help stop terrorist cash flows. Instead, the restrictions are probably doing more to stop tourist cash flows. (After all, I’m sure that terrorists don’t walk up to the counters of commercial banks when they need change to buy a new batch of face masks.)

Frustrated, Miguel asked if there was anything he could do. The bank teller advised him that he would have to go to the Bank of Spain. They’d change it for him there.

Yes, that’s right. Miguel had to go Spain’s central bank just to get change for his 500 euro note. In fact, he had to go here… 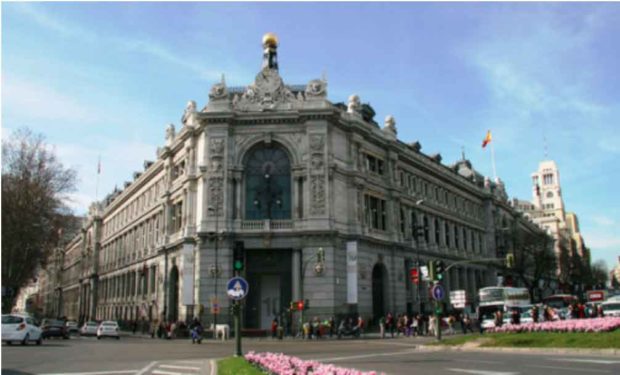 Miguel entered the monetary monolith, followed directions, and found himself in a deserted hall.  There were a number of booths for attention, but no one in attendance.

“Hola? Hola? Is anybody there?”, he called through one of the windows.

“No problem”, came the reply. At last, some progress. At which point Miguel decided to push his luck.

“How about two notes?” This aroused suspicion.

“Do you have identification?”

It’s a sad and bizarre state of affairs when you have to go to a country’s central bank offices, in the middle of the capital city, just to change a legal note of the country’s official currency. Spain has basically banned one part of its own money, except in very narrow circumstances.

There’s an ironic footnote to this as well.

Miguel’s next stop was London, England. He was staying in an area of West London called Bayswater. It’s full of the kind of stores that sell plastic smart phone covers and cheap suitcases, and change money for tourists at a counter at the back of the store. In fact, this kind of place… 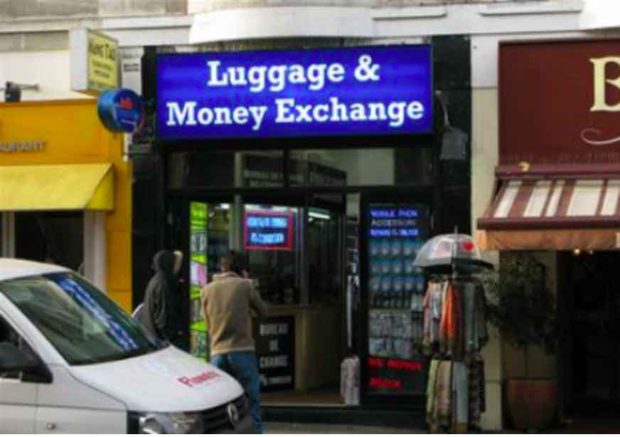 Miguel thought he’d try one out, just to see what happened.

“Can you change a 500 euro note into smaller euro notes for me?”

It’s a bizarre world where you have to go to the central bank to change legal notes in a country that supposedly uses them…but there’s no problem exchanging those same notes at a minor luggage store in a country that doesn’t.

The existence of physical cash is an important limit on the powers of government. Miguel’s experience is a reminder that certain governments are increasingly trying to remove that limit, by making cash harder and harder to use.

The good news is that there are a lot of countries in the world, meaning a lot of alternatives. And there are now cryptocurrencies like bitcoin, which may one day offer reasonably reliable payment alternatives. (Subject to having an electricity supply, an internet connection, a computing device, and access to your electronic wallet and key details).

Finally, there are always gold (or silver) coins. I’ve explained before why gold isn’t “money” any more, at least as most people would define the term (see here). But if the authorities insist on making their own money harder and harder to use, for Miguel and all the rest of us, who knows? Perhaps gold will make a monetary comeback after all.

In any case, progressively tighter government and central bank restrictions on cash certainly don’t make gold any LESS attractive as an investment.