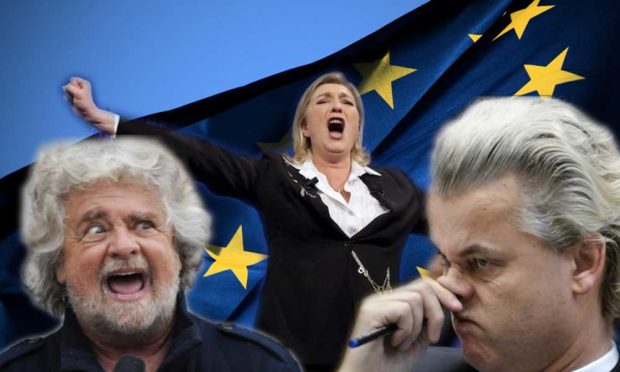 The Italian government has fallen. The French president won’t attempt to run for a second term. Anti-EU nationalism is on the rise across much of Europe. Population demographics are, and will remain, dreadful. Immigration is out of control. Terrorism is now a permanent reality. In short, Europe, once considered a low risk sort of place, is now much riskier. Not least, the EU is cracking up.

Back in July last year I wrote about “The grim future of Europe”. With all that’s going on it’s time for an update.

In there I wrote: “We should expect frequent financial crises and political turmoil in Europe for decades to come. It’s sad to say, but Europe has a grim future ahead of it.”

Nothing has happened since to change my mind.

The problems are rooted in terrible fundamental conditions. This passage sums it up:

“The European Union’s own official projection across the 28 EU countries is that the number of working age people to retirees is set to halve by 2050 from 4-to-1 to 2-to-1. This simple statistic represents a challenge of epic proportions.

Half as many productive, tax-paying workers will be around to fund the pension and healthcare needs of each old person – let alone everything else that governments spend money on.

Where will that money come from?”

Unfortunately it’s all being compounded with extremely poor policy responses. Instead of facing up the the challenge, governments continue to overspend, overborrow, and print money to prop up financial markets (via quantitative easing, or “QE”). They paper over the cracks instead of dealing with the structural weaknesses.

In the meantime, more and more ordinary people are being left behind. Greece – a country saddled with government debt to the tune of 180% of GDP – has an economy that’s a quarter smaller than before the 2008 crisis.

The Greek unemployment rate is still an eye-watering 23%, and double that for those aged less than 25 years. This pattern is repeated, albeit less extremely, in Portugal, Spain, Italy and France.

Europe’s finance ministers had a meeting in Brussels on Monday. One of the major issues was what to do about the Greek debt. The powerful German finance minister, Wolfgang Schauble, was unequivocal in an interview published on Sunday in Bild am Sonntag, a German newspaper.

“Athens must finally implement the needed reforms…If Greece wants to stay in the euro, there is no way around it – in fact completely regardless of the debt level.”

In other words, the Greek government must do as it’s told or be kicked out of the currency club. Tax and spending decisions are no longer taken at the national level, but in Brussels. In the meantime the Greek people continue to live through their economic depression (eight years and counting).

On Sunday, and a little further West, Italy had a referendum – that process of direct democracy that is so detested by the unaccountable EU political elites in Brussels. In theory it was a vote about constitutional change. In practice it turned into a vote of no confidence in the current government.

Does any of that sound familiar? It’s a repeat of the poll failings of the British general election in 2015, the Brexit referendum in 2016 and the US presidential election a month ago. In all cases the results were markedly different to the exit polls.

Italy’s prime minister, Matteo Renzi, promptly resigned (as promised if he lost). This leaves the country in political limbo, although Renzi will technically remain in post for a little longer. The next general election must be held by May 2018, but it could be much sooner.

Why is this relevant? Because there’s an anti-establishment party waiting in the wings to take power. The Movimento 5 Strelle (5 Star Movement) was only founded in 2009, just seven years ago, and yet it’s neck and neck in the polls with the current ruling party.

And get this. The 5 Star Movement is headed by an actual comedian called Beppe Grillo. Italy’s next leader could really be a fully paid up professional joker. But with Donald Trump – the apprentice president – headed to the White House, why not?

Grillo got serious about political activism in 2007 when he organised the “V-day celebration”, which rallied two million Italians. “V” is short for an Italian word that’s equivalent to a common, two word English curse.

The first word rhymes with “duck” and the second word is “off”. In no uncertain terms, Grillo – and those that joined him – wanted to tell the Italian political establishment to “go forth and multiply”, so to speak.

What could be more anti-establishment than that? Jumping forward to today, the 5 Star Movement’s stated policy is to leave the eurozone, that cornerstone of the EU’s political empire building programme.

That’s a big deal. Italy is the EU’s fourth largest economy, after Germany, the UK and France. Whether it was down to luck or judgement, the UK never joined the eurozone. But after the June “Brexit” referendum it’s planning to leave the EU altogether (although powerful British establishment forces are trying to overturn the popular vote).

So Italy’s political future is now up for grabs. France is getting interesting too. The current president, Francois Hollande, recently said he wouldn’t run for a second term in the March/April 2017 elections. Even the presidential ego wasn’t enough to overcome the clear signs that he is a deeply unpopular “leader”.

The French election looks like it will be between conservative Francois Fillion and nationalist Marine Le Pen. Le Pen will probably lose by around 15-20 percentage points, unless the polls are even less accurate in France than elsewhere.

But with an expected 40% plus of the vote there will clearly be pressure to bend to her agenda, whoever is in power. That includes leaving the euro, and possibly the EU as well. Or perhaps she’ll just have to wait a few more years.

Then there’s the Netherlands. This was one of the original six countries in 1951 that joined the European Coal and Steel Community, where the EU finds its roots. It has an election in March next year.

The leader in the polls is the Party for Freedom, headed by Geert Wilders. This is another new party that’s shaking up the establishment. It was only set up in 2006, yet now has a shot at government.

Wilder’s policies include (again) leaving the EU and leaving the euro. Is anyone starting to see a pattern here?

Britain is already getting out of the EU completely. Greece, Italy, France and the Netherlands may leave the euro in future, and even the EU. It may not happen in the next year, but the pressure continues to build.

Whether or not these new parties and political movements are good or bad for their countries is more or less irrelevant. Europe has such deep structural problems, such as the fast ageing population, that I doubt any politicians can keep the voters happy for long.

Conservatives, socialists, nationalists, populists, communists…all of them may get a shot. They’ll promise the moon when on the stump. But there’s no getting over the black hole at the centre of Europe’s finances. There are going to be too few productive, taxable workers to pay for the increasing burdens of state health care, pensions and all the rest of it.

Not to mention the glaring issue of the actual suicide bombings being plotted by Islamic terrorists inside Europe. Inevitably some have snuck in amongst the many millions of recent immigrants. A few dozen, or hundreds, but either way enough to cause havoc.

My own feeling is…and has been for many years…that much of Europe will suffer the same fate as Argentina did over the past seven decades. That’s since Juan Manuel Peron first came to power in 1946 on a wave of populist rhetoric.

Decades of ineptitude brought a once rich country to its knees, through repeated financial crises and political violence. Peronism and its like is going global, and modern day Europe is its natural new home.

I wish I could be more optimistic about Europe. But it’s hard to see reasons why anyone should be over the coming years and decades. Regular bouts of political and financial upheaval seem a certainty. There will be huge effects in financial markets.

None of this rules out Europe as an investment destination. After all, I know several people who have made fortunes out of Argentina’s violent real estate and stock market cycles.

It’s just that the risks in Europe have increased and continue to rise. It’s more important than ever to price those risks into European investments. Investors need to be more selective than ever as the cracks grow bigger in the EU Empire.

ArgentinaCurrenciesDemographicsEconomic CrisisEuropeFranceGovernmentGreeceItalyUK
Previous ArticleMoney, markets and media manglingNext ArticleThe bond bubble is bursting. Or is it?