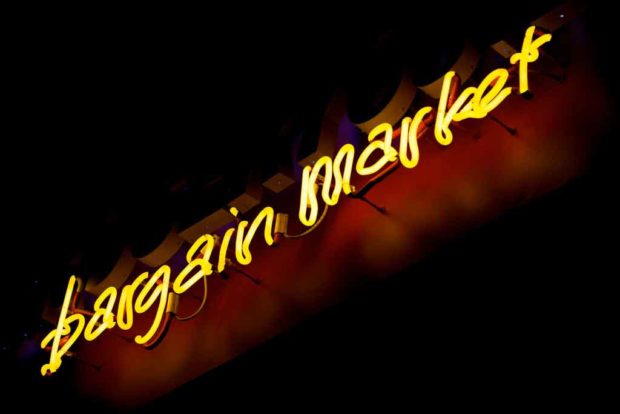 This week OfWealth is looking at the idea of taking some of your investments on a “crisis vacation” from time to time. It’s all about scooping up bargains shortly after some kind of crisis, and then enjoying substantial profits as things improve and markets recover. Last time I looked at what it’s all about, and some past examples (see here). Today I’ll see what’s available right now, or what to keep an eye on.

Wars in Syria, Iraq and Yemen. An ongoing political crisis in Brazil. Venezuela in political and economic meltdown. Rising tensions on the Korean peninsula. Political uncertainty in the UK and an ongoing dogfight in the USA. Qatar blockaded by its neighbours.

You’d think that there’s plenty going on that would unsettle the markets. But few investors seem to care. Instead, everyone’s much more interested in the moods of the heads of the world’s central banks. Apparently, nothing else matters.

Which is strange if you own, say, South Korean stocks. Would it be fair to say things are more than a little, er, “tetchy” between North Korea and the US and its ally in South Korea?

A country on the cusp of crisis

North Korea’s “Supreme leader” Kim Jong-un and comrades recently test fired an intercontinental ballistic missile (ICBM). They’ve claimed it could reach the US state of Alaska if needed. In response – although denying any connection – the US did a successful test over Alaska of its “THAAD” anti missile system.

With Fatboy Kim and The Donald shouting ever louder, and now starting to chuck toys at each other, you may be surprised to know that South Korean stocks are up 28% so far this year. That’s the performance of the MSCI Korea index, measured in US dollars. It’s certainly got me scratching my head.

That’s a very decent return over a little more than two years (and way ahead of the S&P 500). Korean stocks remain pretty cheap, with a price-to-earnings ratio (P/E) of 13.6 and price-to-book ratio (P/B) of 1.2.

BUT…it looks like things could really kick off in Korea this time, unlike the periodic sabre-rattling that we’re used to. There’s no sign of either side backing down. It wouldn’t take much for heated rhetoric to turn into a hot war.

In my book that means the risks of owning South Korean stocks are currently too high. They’d be cheap in a stable environment, but not in one with the clear potential for an imminent catastrophe. Of course it could all blow over, and the market could keep heading up. But surely there are safer places to invest in the world right now?

Bottom line: If you own South Korean stocks then I recommend you sell them.

Other places have ongoing crises too, meaning I’d continue to stay away.

Brazil for one, where practically the entire political class is under a cloud of corruption scandals. That includes the supposed saviour that the market previously put so much faith in, President Michel Temer.

Temer replaced the previous president, Dilma Rousseff, after she was impeached. At the current time it looks likely that Temer will also go to trial and will be suspended from the presidency.

It’s even worse in Venezuela, which continues to experience daily protests, scandals, political violence and all the rest of it. It could descend into full blown civil war. Or there could finally be a change of regime.

Given the current hyperinflation, and the “paradox of inflation” that I highlighted last time (see here), when Venezuela does finally emerge from this mess there could be some incredible stock market bargains. Well, that’s assuming – when the time comes – there are any Venezuela funds or stocks available for investment. (At the time of writing I haven’t found any.)

Then there’s Greece, the EU’s shameful perma-crisis. The economy is still a quarter smaller than it was before the global financial crisis a decade ago. It’s suffering a major, ongoing depression.

Greek stocks may look cheap to some. The MSCI Greece index has a price-to-book ratio (P/B) of just 0.6. That means, in theory, you could buy the entire market, liquidate all the companies, and get back one euro (or dollar) for every 60 cents invested – a gain of 67%.

The problem is that company profitability remains very low, as you might expect in a depression economy. I continue to believe that Greek stocks should be avoided, at least at the index level. That’s as long as the country is shackled to the euro currency and carrying the millstone of an unpayable government debt burden of 180% of GDP.

Another place where stocks look cheap is Turkey. The MSCI Turkey Index has a P/E of 10.5, P/B of 1.4 and dividend yield of 3.3%. That seems pretty attractive.

Except Turkey’s President Erdogan seems intent on creating an ever more authoritarian state. And just look at the southern neighbours…

Hence I continue to find it difficult to get excited about Turkish stocks, even though they look cheap on the face of it.

So where are the actual opportunities for a “crisis vacation” right now? The reality is that they’re few and far between…although perhaps not for long.

Places I’ve recommended in the past include Norway, “the richest country in the world” (see here from 18th June 2015) and Colombia (see here from 20th April 2016). It turns out I was early with both.

Since their recommendation dates, Global X MSCI Norway ETF (NYSE:NORW) is flat and the Global X MSCI Colombia ETF (NYSE:GXG) has returned 2%, both including dividends. Oil prices have remained weak, which has held back price progress in these oil producing countries. But if you bought either of the ETFs then I suggest you hold on.

As for right now the stand out “crisis” opportunity remains Russia. That’s especially true if the US administration is serious about having better relations with the country after Trump met President Putin for the first time last week.

That said, the latest claim is that Trump’s son, Donald Junior, tried to get some dirt on Hillary Clinton from a Russian lawyer ahead of last year’s election. The revelation has suspicious timing, to say the least. We await real evidence of anything appearing in the public domain.

In any case, Russian stocks had an excellent year last year, bouncing from extremely depressed levels reached at the end of 2015. The following chart shows the performance of the three main Russia ETFs since February 2015, when ERUS was created. They are:

You can see that both ERUS and RSX had a great 2016, each gaining over 40%, plus dividends. RSXJ, which invests in riskier Russian small cap stocks, was even more spectacular and doubled.

But then this year has been relatively weak once again for Russian stocks, meaning they’re back in super cheap territory. They’re priced for a crisis, just as crisis starts to recede (both in terms of economic recession at home and international tensions in places like Syria).

I used to prefer RSX to ERUS because it had a more balanced sector allocation, with a little less sitting in the large Russian energy sector. Nowadays RSX is 40% energy and ERUS is 46%, so the difference isn’t that great. (Note: Russian energy companies enjoy low costs, and are more profitable than most of their foreign competition.)

Also, for some reason, ERUS does a better job of passing on dividends to investors. It yields 3.4% net of fees based on last year’s payments, against RSX’s 1.7%. I expect those yields to rise this year.

The recent weakness in Russian stocks looks like another buying opportunity. It’s a pause in the market recovery that began in early 2016. Even more than that, 2017’s falls could have now bottomed out (see chart). So I recommend that you buy Russian stocks.

You never know what crises will be served up to you by the markets. But it pays to keep your crisis radars turned on at all times. Taking a crisis vacation with your investments, if done correctly, is usually a highly rewarding strategy.