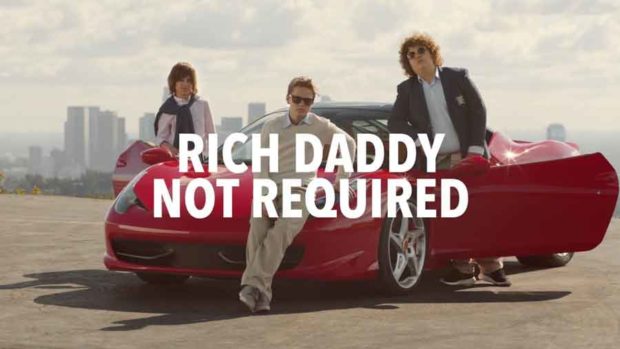 An incredibly rare event happened on 3rd January 2009. An entirely new asset class was created when bitcoin was born, the first crypto currency.  Today there are over 1,000 crypto currencies (or “assets”) with a combined value of US$171 billion. Hundreds more are already on the way. This is a market mania, the likes of which hasn’t been seen since the dot com bubble of the late 1990s. A new generation of speculators is about to get badly burnt.

Let’s get one thing out of the way right at the start. Cryptocurrencies are clever things that are here to stay, and bitcoin itself is likely to be one of the long term survivors. What’s more, the blockchain technology that underpins the existence of cryptos, and that records the transactions, could have thousands of additional uses outside the world of money and payments.

The best description I’ve heard for Bitcoin is that it’s the equivalent of “cash” for the internet age, as are its copycats.

By that I mean people can use bitcoin to make direct payments between individuals or companies, without any intermediary such as a bank or credit card company. If you have an online “wallet” and internet access, and so does your friend, you can send bitcoin to each other whenever you like.

Bitcoin still has a big head start on the rest of the field. The following chart shows the market shares of the top 10 cryptos and the rest, in terms of current market capitalisation (meaning value of all the “coins” or “tokens” in existence at the current price). 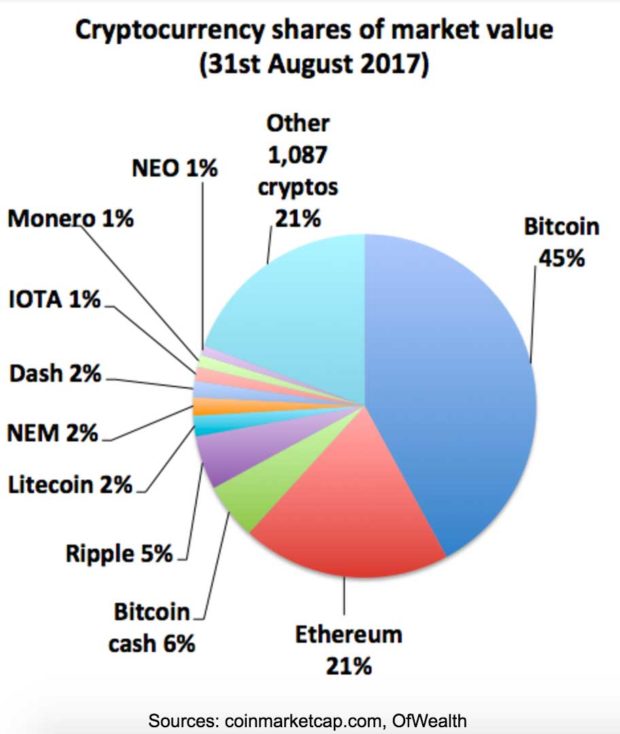 Bitcoin is still 45% of the pie. In fact, it’s really 51%. That’s because it turned out to have technical deficiencies that made it slow to transact large volumes. That led to a decision to split (“fork”) it into two separate cryptos on 1st August 2017, and upgrade it at the same time: “bitcoin” and “bitcoin cash”. Owners of the original bitcoin received one of each, at least in theory.

There are a number of substantial alternatives, such as ether and ripple. I’ve shown the top 10 separately on the chart. But you’ll notice that there are an incredible 1,087 others, which between them make up 21% of the total market value.

Adding back the top 10, for a grand total of 1,097, there are 866 that are considered to be “currencies”, with a further 229 thought of as “assets”. That’s according to the lists on coinmarketcap.com.

Apparently, the purposes and motivations behind these cryptos are diverse. Some have a political leaning. All the TheresaMayCoins are worth US$45,000. TrumpCoin is far more popular, summing up to $424,000 of current worth. But, sadly for both Mrs. May and Mr. Trump they are trounced by PutinCoin, with a market capitalisation of US$8.8 million. Let the conspiracy theories commence…

From a selection of the names you can guess that the crypto creators have a great many motivations: Biblepay (scripture), Britcoin (patriotism), Doubloon (pirates?), Evil Coin (surely not good), Mao Zedong (irony?), Rupee (confusion?), The Vegan Initiative (well, it’s not meat based), Vegas coin (why go to Nevada when you can gamble on this?).

There’s even a DuckToken. Except that the first syllable only rhymes with the water-borne bird word. In fact it’s a popular and versatile part of the vernacular that might be described to mean “engage in intimate relations”. And the current worth of all these love tokens? That’ll be US$4.7 million. Clearly there’s some interest…

All of this is a staggering development when you consider that there are only 177 fiat currencies in the world. Fiat currencies are those regulated and controlled by governments and their central banks (although new units of each are mostly created by commercial banks, each time they make a new loan).

Whether the currency in question is rupees, rupiah, ringgit, reais or roubles – or any of the rest – it’s what the vast majority of people around the world consider to be “money”. Some of those have been around for centuries. British pounds sterling date back to 1694, US dollars to 1792 and Swiss francs to 1799. Yet, within a very short period of time, hundreds of potential crypto challengers have been created.

Already there are 6.2 times as many cryptos as there are fiat currencies in the world. Plus new ones are popping up all the time, issued via something known as “initial coin offerings”, or “ICOs”.

I’ve written about bitcoin and the cryptos before, back in May (see here and here). On 23rd May there were 831 cryptos. This means that 266 new ones have been added in just over three months, an increase of 32%. What’s more, according to website tokendata.io there are currently another 322 ICOs in progress or in the pipeline. And no doubt hundreds or thousands more are being dreamt up as I type.

In fact, in that short time since late May the total market capitalisation of this asset class has gone from US$80.3 billion to US$171.1 billion. Which is to say it’s more than doubled, as shown in the next chart. 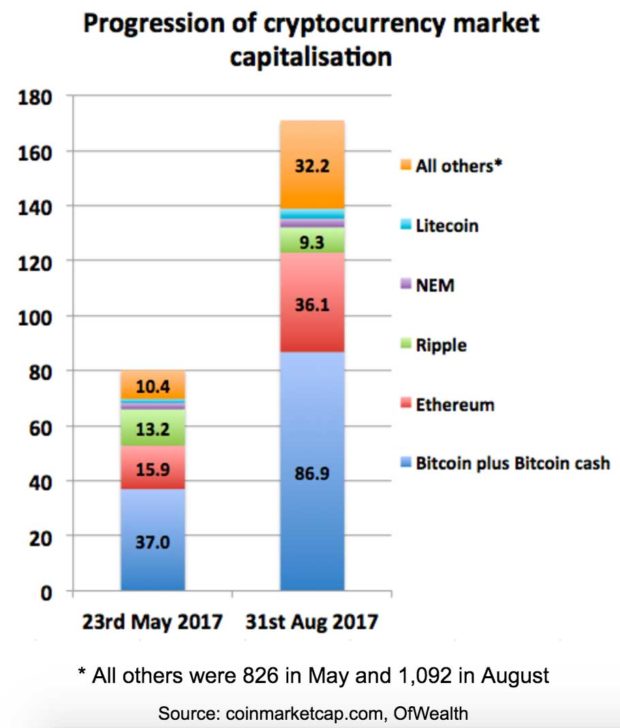 Glancing down the list of ICOs there’s a wide range of descriptions given. WhopperCoin is a form of tradeable reward points given to customers of Burger King in Russia. Basic Attention Token is a “digital advertising solution”. Civic is linked to “identity verification”. Storj-x is to do with “decentralised computing and storage”. Augmentors are tokens to use in video games. Tokes are “digital currency for cannabis businesses”. DigixDAO is “gold backed”. Waves is a “platform to launch new tokens”.

Somewhere amongst it all there’s bound to be the crypto equivalent of “a company for carrying out an undertaking of great advantage, but nobody to know what it is”. That was the famous description of one of the companies that issued stock during the South Sea Bubble of 1720, a previous market mania.

Which, incidentally, was an episode that saw no less a genius than Sir Isaac Newton lose a fortune. Proving that brains do not necessarily immunise a person against a spot of unwise speculation.

This time will be no different. It reminds me of the dot com bubble of the late 1990s. Rocketing prices gave the illusion of easy money. Many people made a fortune. Just as many, perhaps more, subsequently lost a packet in the bust.

I was in my mid-20s at the time and didn’t have any substantial savings to speak of. But I knew others that turned a stake of a few thousand into hundreds of thousands, practically overnight. Anyone could launch a company and raise millions of dollars from credulous investors, just so long as the name included “dot com” in it. Never mind silly little details like a business plan, or any previous experience running a company.

Something horribly similar is now happening with cryptos. There’s a feeding frenzy as ICOs are rushed to market, and a new generation – or those with poor memories – scramble to get their wallets out.

“Real estate? Stocks? Bonds? Puhlease. That stuff’s for granddads. Why bother with all that hassle, when there’s easy money to be made in crypto world?”

Trust me on this one: money will be easily lost as well. Or stolen.

Correction: money is already being lost in some cases. A crypto called Ethbits raised US$1.3 million in May. The price is already down 99% since then. Something called iDice raised US$2.5 million from its June ICO. It’s lost 73% in dollar terms. Somebody is out of pocket.

This is clearly a mania. It’s a mania in the same way that people speculated on tulip bulbs in Holland in the 1630s. That’s when the punters paid as much as the price of a house for the opportunity to own the rarest blooms (For the full story see the book Tulipomania, by Mike Dash.)

Perhaps I should launch my own cryptocurrency? Hmm. Let’s see. Maybe I could call it TulipCoin. Or DotComCoin. I’ve got it! TulipDotComCoin. The money is sure to roll in…

As I said at the outset, I’m sure that cryptocurrencies are here to stay. Just not most of the ones that exist today (remember: most of the dot coms failed). In fact, I reckon that good old fiat currencies will end up coming on board and start using the new blockchain technology. After all, little Estonia is already planning to launch Estcoin.

In other words, decades from now, we’ll still be using dollars, euros, pounds, pesos and so on. It’s just that the technology for recording how much we have and for passing them around will have changed. Most likely, banks will still sit at the centre of all of that – busily borrowing and lending, just as they do now.

Does that mean that non-fiat bitcoin is doomed? I doubt it. Although, as said in May about the likely price trajectory: “Nobody – and I mean nobody – knows what happens next. No self-proclaimed guru. No independent analyst. No hopeful speculator. No regretful latecomer to the party. Not you. Not me. Nobody.”

As it turns out it did the former, and is now priced at US$4,698. In other words it practically doubled (again). My diagnosis for the future remains unchanged. There’s no way of knowing what a bitcoin is worth, and the price could go anywhere. Either way, it’s already in its third short-term bubble, as this chart of it’s US dollar price clearly shows:

At some point it’s likely that the price will collapse, and interest in bitcoin will decline again. Thus setting itself up for another run higher in a few years time.

As for the rest of them, the current ICO frenzy is a mania centred on hot new tech, just like the late ‘90s dot coms. Fortunes will be made by a lucky few. But I expect them to be lost by an unlucky many.

If you want to get involved with speculating on cryptos, only stake money that you can afford to lose. When it comes to investing, you should never have too much money riding on one thing. That’s doubly true in an area that’s so obviously ultra high risk as the crypto world. For those tempted, I wish you the best of luck.