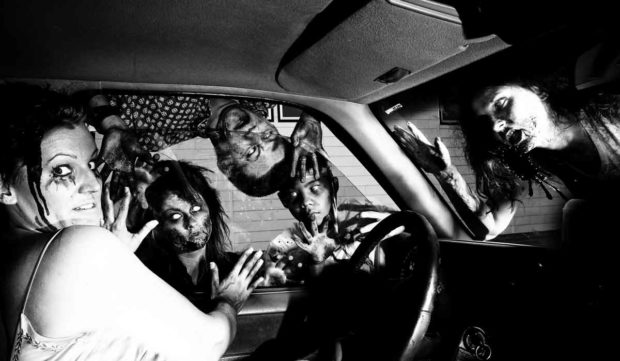 “To kill zombies you need to destroy their brains.” Such was the wisdom yielded by an internet search to solve a pressing financial issue. Debt zombies are many and multiplying. Their “brains” – those organs that direct them to zombified behaviour – are the world’s major central banks. After the next crisis, those supposed geniuses may get destroyed by politicians looking for someone to blame. But, by then, it will be too late.

This isn’t exactly breaking news, fake or otherwise. But for some reason the issue has popped up in a lot of my reading material in the past month or so. For example, take a look at this recent quote from a top investment strategist on the money printing that’s been used to feed the debt binge:

“While politics in the West reels from a decade of economic crisis and stagnation, asset prices continue to surge on the back of continued rapid growth in G3 QE. In an age of “radical uncertainty” how long will it be before angry citizens tire of blaming an impotent political system for their ills and turn on the main culprits for their poverty – unelected and virtually unaccountable central bankers? I expect central bank independence will be (and should be) the next casualty of the current political turmoil.”

[Note: G3 refers to the US, Japan and the European Union (EU). “QE” is quantitative easing, or money printing to buy financial assets.]

Only time will tell whether Edwards is right that the central bankers will be purged, or beheaded, or have their zombie brains bashed out. But it certainly appears that there’s plenty of reason for concern when it comes to the world’s finances.

The situation today is different to that a decade ago. The commercial and investment banks are in much better shape, and less likely to go bust, although it can never be ruled out.

But many governments, households and corporations have dug themselves into ever bigger debt holes. Eventually the sides will cave in and bury them. What follows is some of the evidence I’ve found.

I’ve just delved into the 87th Annual Report of the Bank for International Settlements (BIS), which was released on 26th June. The BIS is a sort of central bank for central banks, and based in Switzerland.

The annual report is 259 pages of literally thrilling financial data and commentary. At least if the word “thrilling” is as loosely defined as a drunk’s field of vision or a politician’s moral code.

But there’s usually plenty of insight buried in there. So, in the interests of my valued OfWealth readers, I finally plucked up the courage and took the plunge. Surely someone should read this stuff?

The following chart really stood out. It shows the explosion in numbers of “zombie firms” in 14 of the main developed countries since 2006. 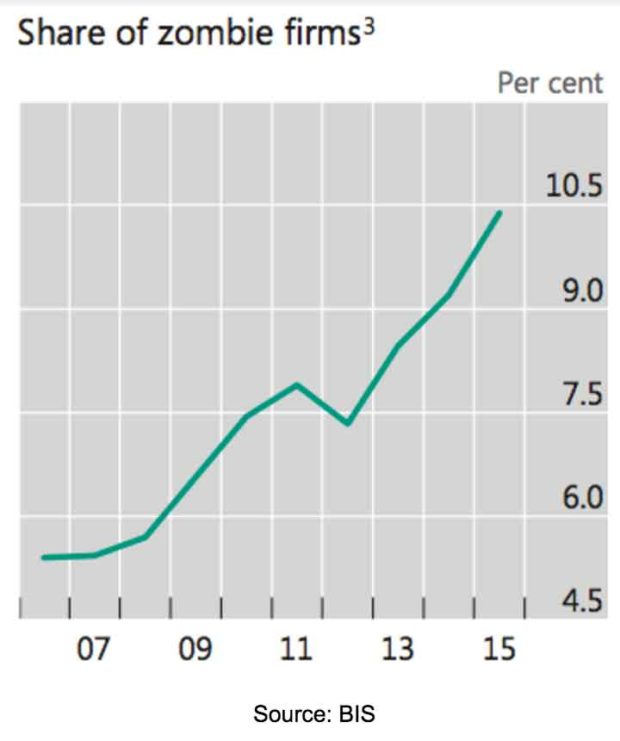 These zombie firms are defined as listed companies – those with shares trading on a stock market – whose profits don’t cover their interest expenses.

[For the more technically minded, it’s where company earnings before interest and taxation (known as EBIT), divided by interest expense, equals less than one.]

As you can see the number of such struggling companies has rocketed. The zombies were about 5.5% in 2006 but jumped to around 8% by 2011, in the aftermath of the global financial crisis. Then the figure dipped a little in 2012. But this next point is key…

Since 2012 the percentage of companies defined as zombie firms has just kept on rising every year.

This is especially disturbing when you think about how low interest rates and bond yields have been. In fact, not just low recently at record lows never seen before – at least not in the last 500 years. (See here for more.)

In other words, despite ultra low interest rates, more and more companies have taken on so much debt that they are sinking under the weight of it.

There are already several structural reasons why rates of productivity growth could be much slower in the future (see here). Feeding ever more capital flesh to the corporate zombies just makes the problem worse.

Here’s a chart showing how the world (actually the G7 plus China, but that’s the bulk of the economy) has just kept on piling up the debt, as a percentage of GDP, as interest rates have fallen. 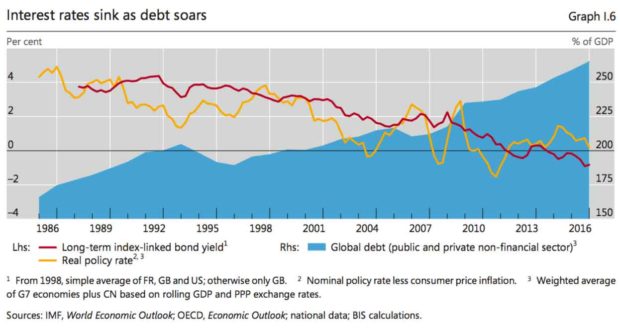 And of course there’s still a huge amount of government bond debt that’s so overpriced that it “rewards” investors with a negative yield, as this next chart shows. 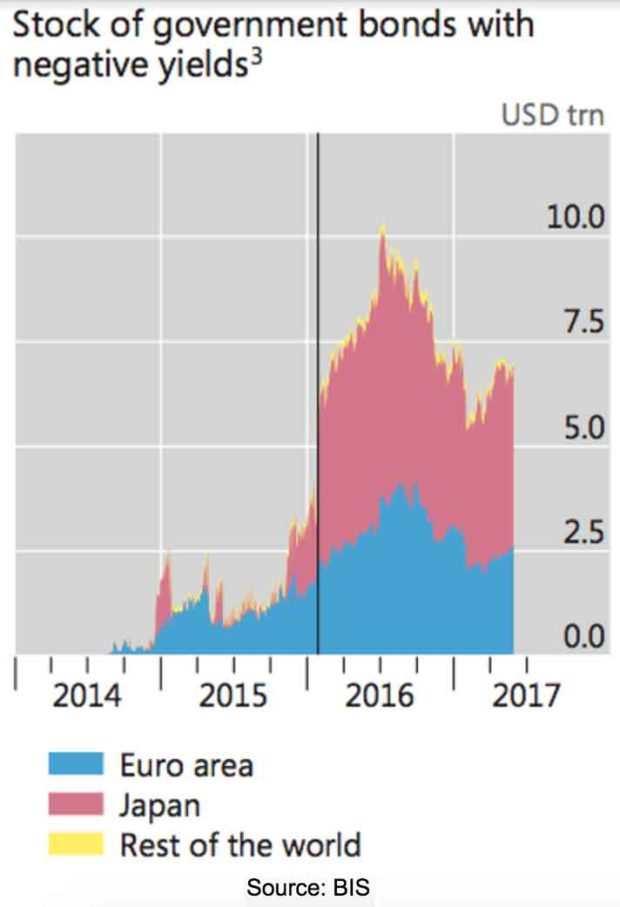 Given such a low rate environment, it’s staggering that the zombies continue to breed. But, even more worrying, it’s not just corporate zombies that stalk the landscape. Zombie governments have multiplied as well, even if the physical symptoms aren’t always evident to the general public.

The next chart shows debt levels for governments, companies and households in 2007, 2010, 2013 and 2016. “AEs” refers to advanced economies (developed countries), and “EMEs” are emerging market economies.

That boom in developed country government debt had a following wind. Central banks printed trillions of dollars worth of new money to buy up (mostly) government bonds.

For some reason that still escapes me it’s acceptable to fund government deficits when done indirectly through the bond markets. But is it really any different to just printing money and handing it to the government directly? For now at least the veneer of respectability conferred by calling it “quantitative easing” somehow preserves the illusion that all is well. In the meantime it starves legitimate investors of an adequate supply of investments, and creates asset bubbles, starving them of decent future returns as well. 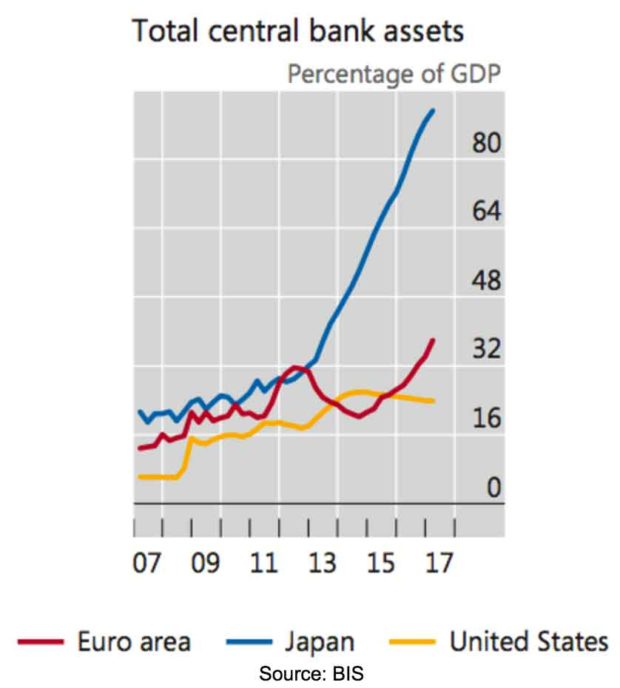 As for the rapid expansion of corporate debt in China, it may or may not turn out to be a big deal. I’ve written before about evidence suggesting it’s concentrated in relatively few state-owned enterprises, meaning companies back-stopped by the reserve-rich Chinese government (see here for more).

But that may be optimistic, since data is often patchy. Certainly the historical precedents of what happens after massive debt booms aren’t exactly great, as this following chart shows. (Apologies for the poor quality. Click on it to make it larger.) 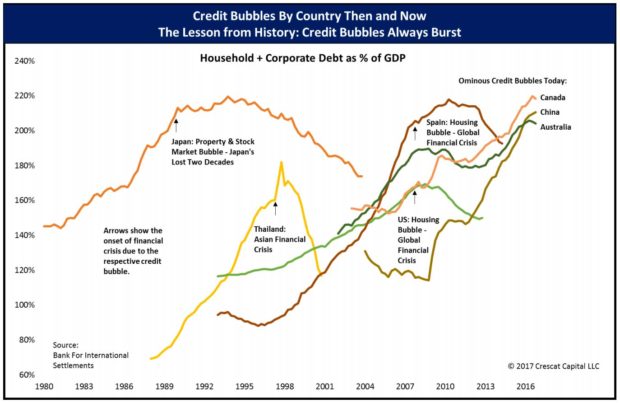 Finally I’ll leave you with a chart I found several years ago in one of Marc Faber’s excellent Boom, Gloom and Doom reports. It shows what happened to interest costs as a share of US pre-tax profits last time there was a secular (long term) rising trend in interest rates, mainly during the ‘60s and ‘70s. 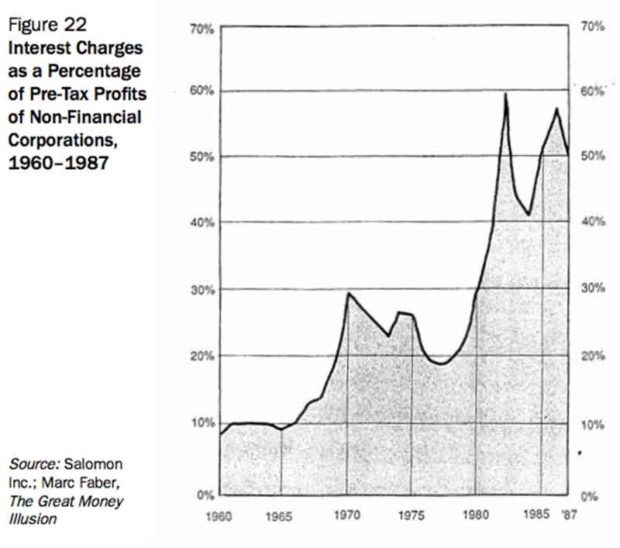 I think you’ll agree that the prospect of such a repeat should have any stock investors in a cold sweat. Mind you, I’m not saying such a dramatic scenario is imminent. But higher rates seem certain one day in places like the US and UK – either due to policy or because investors take fright (never forget the twin budget and current account deficits in both countries).

It’s clear the world is infested with zombies once more. It’s probably too late to “destroy their brains” and return to safety. We’ll need another crisis and the scapegoating of central bankers for that to happen.

In the meantime, in this debt-sodden world, every investor’s basic position should be to exercise a high degree of caution. With that in mind I continue to recommend that investors hold 10-20% of their portfolio in physical gold (see here for more, and where to buy it).

That may sound like an unusually high allocation to many. But these remain unusual and uncertain times. One day the debt zombies will overwhelm us (again).