There are always risks in investment. How you should invest at a given point in time depends on their nature and size. US stocks have only been more expensive between 1997 and 2001, during the (last) tech bubble. Bonds and real estate are bubbly in many places. And now the American and North Korean leaders are insulting each other publicly, and we’re hearing open threats about the use of nuclear weapons. In times such as these, investors need to think about how to play defence.

When I was a kid in ‘70s and ‘80s Britain, during the latter part of the Cold War, it was common to hear about nuclear weapons. We all knew about things like the two minute warning, nuclear winters, fallout, radiation sickness and “M.A.D.” (Mutually Assured Destruction).

Basically, there was a general assumption that one day soon we were all going to be vaporised if we were lucky, or die a slow and agonising death if we weren’t.

Unsurprisingly, the possibility of nuclear obliteration featured frequently in popular culture. When I was 12 my school headmaster sat us down to watch a film (“Threads”). It was about a fictional nuclear strike on a British industrial city, and the subsequent collapse of civilisation. (It was pretty shocking stuff for a kid from the countryside. But I survived, despite the lack of “trigger warnings”, which fortunately hadn’t been invented.)

Then things went quiet after 1990, when the USSR collapsed. No one talked much about nuclear weapons anymore. That is, until recently.

First of all, relations between the US and Russia – the two big nuclear powers – hit the skids after the coup d’etat in Ukraine, and Russia’s response. Now there’s loose talk of nuking North Korea, or of North Korea nuking someone else in future.

During the Cold War, the USSR and NATO developed codes of conduct, conventions, back channels of communication, and settled into a general status quo over time. Of course there were some conventional wars (e.g. Korea, Vietnam, Afghanistan – see Rambo III), and the Cuban crisis was touch and go. But once that was out of the way, by and large, at least everyone knew they weren’t supposed to openly threaten each other with nukes. It was just enough to know who had them.

Suddenly that seems to have changed. Which, presumably, is what prompted this message from a concerned reader:

Enjoyed your latest article which as always is clear and down to the point. [Note: this refers to “Beware the temptation to trade too much”.]

Question: What if any are the “defensive“ measures one should contemplate making in a conservative portfolio as a consequence of the escalation of, so far verbal hostilities between Mr. Rocket Man and the Twitter king of all times?

Thank you John. I’m going to broaden out your question a little, and think about how investors need to be defensive right now against all sorts of risks, and not just what might happen in Asia.

That said, as regards that specific risk, I’ve already recommended a couple of concrete steps to readers of the OfWealth Briefing. Back in June 2015, I recommended an investment in South Korean stocks via the iShares MSCI South Korea Index ETF (NYSE:EWY). I decided this should be sold on 11th July this year for a 24% profit.

The reasons for getting out of South Korean stocks are obvious enough, given the heightened risks. After all, the capital city of Seoul is only 35 miles (56.3 kms) from the border with North Korea, and the metropolitan area is estimated to have a population of 25.6 million people.

Also, in August last year, I recommended an investment in Japanese stocks via the WisdomTree Japan Hedged Equity Fund (NYSE:DXJ). A sell alert was issued on 26th September, just a couple of days ago, for a 30% profit. The logic is more nuanced, but you’ll find the explanation at this link.

Both were sold earlier than I would have liked, if circumstances hadn’t changed. But, in any case, they each made a healthy return:

Even before things started heating up in North Korea, I’d recommended a pretty defensive portfolio allocation. This was last updated on 17th August and is summarised below. (You can read more about the thinking behind it here.)

Defensive elements in the recommended portfolio

The challenge with any portfolio is to balance two things: opportunities for profit and defensive qualities. The main long term profit sources in my recommendation are from stocks and, to a lesser extent, gold. There are at least five defensive qualities as well:

Let me expand on the usefulness of cash at times like these. To reiterate, it gives you peace of mind as ballast, and future profit potential as ammo.

To illustrate this, I’ve come up with a very simple comparison of some model portfolios. The background market environment is one where stocks crash 40% in year one, and then recover all lost ground over the next two to three years (similar to 2008 to 2011). Dividends are ignored to keep things simple.

In this environment, I’ve set up three alternative portfolio strategies that each start with $100:

The first two scenarios give the same result over three to four years, and a profit of zero (the cash makes nothing and the stocks fall then rise). The only difference is that scenario 1 sees a portfolio price fall of 40% in the crash, which would certainly unsettle most people. Whereas scenario 2 falls a much smaller 24%. This is a demonstration of the “ballast” quality of a high cash allocation.

(Note: with treasuries and gold on board as well, and a lower allocation to stocks, I’d expect my recommended portfolio to fall much less in this situation.)

On the other hand, scenario 3 actually gains 20% over four years, and therefore beats the other two by the same amount. That’s because cash is deployed to load up on cheap stocks after the crash, and generate additional profits as the market recovers.

Here are the numbers (click on the table to make it larger). 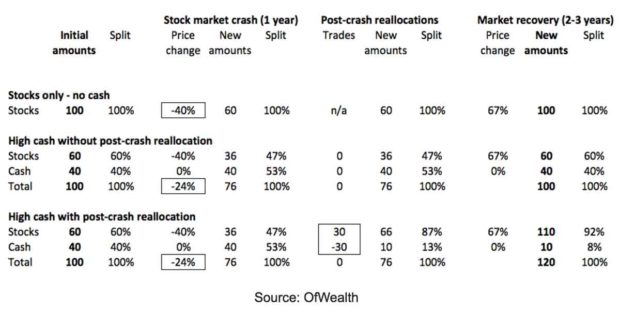 It’s clear from this that holding a lot of cash is great news in a crash. Of course, holding 100% cash before the crash would be even better, limiting the downside even more and increased the post-crash upside (since you could buy even more bargains). But there’s no guarantee that a crash will happen in the first place.

In the end this comes down to judgement. If stocks are cheap then crash risks are low, and holding masses of cash (or bonds) makes little sense. But if stocks are riding high then bargains are few, and crash risks are higher too. In that case it makes sense to keep some dry powder in the form of cash.

Whether or not there is an eventual conflict on the Korean peninsula – and I sincerely hope that cooler heads will prevail – I certainly believe now is a time to play defensive when it comes to investing.  My recommended portfolio allocations are an easy and comprehensive way to go about it.