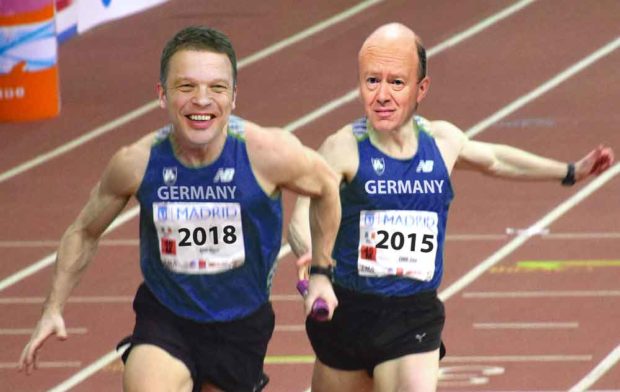 Deutsche Bank has sacked its CEO, but the turnaround of this troubled bank will continue. Today I’ll give a summary of the main changes, and what’s been said so far about the future direction. The upside potential for the stock is still substantial.

First quarter results are due out on 26th April, and the signs are that they’ll be reasonable, if not spectacular. In fact, in an open letter to staff published on Monday, Sewing wrote: “Our start to the year was solid.”

Hence, probably, the rush to get Cryan kicked out of the door. Once the leaks had happened (deliberately or otherwise) about Chairman Paul Achleitner’s search for a replacement CEO, there was clear motivation to eject Cryan before he could preside over reporting a “solid” quarter of results.

In my view, Deutsche Bank has fired the wrong man. Achleitner has been in his role since 2012, and oversaw the bank digging itself into a bigger and bigger hole. Since 2015, Cryan dug it much of the way out – settling huge litigations for past misdemeanours, paying massive fines, shoring up the capital base, cutting costs and investing in technology.

Amazingly – given the apparent falling out between Cryan and Achleitner – Cryan’s key role has been publicly acknowledged by his replacement. Sewing’s letter to staff opens with the following words:

“The past few weeks have been full of noise and I know from many personal conversations that you have been concerned and still are. I am also aware that many of you greatly appreciate John Cryan – just as I do.

First of all, I therefore want to thank John for our nearly three years on the Management Board together, and for his enormous contribution to our bank. He has led us through an extremely difficult period and I would like – both personally and on your behalf – to express my sincere thanks to John for all he achieved for our bank and for us.”

For anyone who’s worked in the inner sanctum of a big European bank – and I used to do just that at UBS Group – this is an extraordinary acknowledgement after such a public fight.

Back in 2001, there was a major falling out between UBS’s Swiss Chairman, Marcel Ospel, and the bank’s British President (effectively CEO), Luqman Arnold. I doubt they ever kissed and made up, to say the least.

(In case you were wondering, that’s an extreme example of British understatement. The full story isn’t something I’d like to put into print, even today.)

Deutsche Bank hasn’t just changed CEO. There have been other management changes too.

Frank Strauss will become the sole head of the Private & Commercial Bank. That’s a key role as it involves the incredibly important merger of the two German retail / commercial banking businesses. This is where Deutsche Bank must squeeze out a lot of costs, with branch and staff cuts.

Also, Marcus Schenck is leaving. He was previously Co-Deputy CEO, along with Sewing, and Co-Head of Corporate & Investment Banking (CIB). Presumably he’s miffed about not getting the top job, and has decided to clear off.

That leaves Garth Richie as the sole head of CIB. At the same time, Richie and Karl von Rohr (also COO) have been named Co-Presidents of the bank.

Both Richie and von Rohr are elevated a little, but not enough to be “Co-CEOs” (a subtle, but important, distinction in the title-infested world of banking). James von Moltke – previously an M&A banker – remains as CFO.

Let’s take a closer look at the newly-minted CEO, and what it’s likely to mean for the bank’s future direction. The main criticism of Cryan – rightly or wrongly – appears to be that he didn’t do enough to grow revenues. In which case, it’s entirely unclear at this point how Sewing is the right man to solve that.

You see, Sewing’s background – before running the retail and commercial bank since 2015 – was as Head of Audit (2013 to 2015). Prior to that he worked in risk control. Neither was a role that’s either customer or market facing. So it’s unclear how he’s going to suddenly inspire the troops to great revenue-grabbing heights.

But, that aside, it doesn’t mean Sewing isn’t going to do a good job, in the context of what’s required right now. Deutsche Bank is still only half way through its turnaround, and it’s cost-cutting that should remain the top priority.

Plus, with his recent experience running the German operations and preparing their merger, Sewing is well-placed to oversee progress in that area. There will be a lot of ongoing political, union and media pressure in Germany over the next couple of years, as branches are closed and jobs cut. Being German will help him deal with it all.

Of course, it’s reasonable to expect that Sewing will want to make his mark, and tweak the strategy of the bank. It’s too early to know precisely what he’ll change about the bank’s strategy, but there are already some early signals.

In the open letter sent on Monday, he said costs “must not exceed 23 billion euros in 2018…This is non-negotiable.” The figure hasn’t changed, but it still sends a strong signal to the businesses.

He also said (referring to 2017): “We missed some of our targets for costs and revenues…The new leadership team will not accept this anymore.”

Translated messages to the businesses: If your costs overrun your targets, we’ll cut bonuses to make up the difference. If your revenues fall short, heads will roll.

That’s the kind of language that bankers, especially bonus-seeking investment bankers, understand. (If you’ve ever worked inside an investment bank, you’ll know how big the end of year bun fight for bonuses is.)

In recent weeks, as the rumours about changes have swirled, there’s been a lot of speculation about plans for the Corporate & Investment Bank (CIB) division. Well, here’s some of what Sewing said about that specific division:

“…we’ll have to further adapt our revenue, cost and capital structure…At the same time, we will look to free up capacity for growth by pulling back from those areas where we are not sufficiently profitable.”

Translation: there will be a new round of job losses at CIB. Some businesses will be scaled back significantly, or even closed. Anything making a low return on capital – a scarce resource (“capacity”) – is at highest risk of going on the chopping block.

What it means for the stock

As I said before, first quarter results will be published on 26th April, and management has already said they will be “solid”. What’s that likely to mean?

Once you cut through the noise of 2017’s results, the underlying businesses made a return on tangible equity (ROTE) of about 4%.

If revenues stay flat in 2018, and costs come in at €23 billion over the year, I estimate underlying ROTE will be close to 5%. If revenues grow even 5%, then I estimate ROTE would jump to 7%.

Expecting much more than a mid-single digit ROTE is unrealistic at this point. It’s what happens in future that counts.

That gives it a price-to-tangible-book ratio of 0.45. Put another way, the stock is trading at less than half of liquidation value.

If ROTE never goes up, that’s probably a fair price. But the whole investment thesis is that ROTE will get to around 10% in the next couple of years. That’s as costs are cut significantly and revenues grow even a little.

However, that 10% ROTE was the previous management target. We don’t yet know if new management will stick with it.

But, even if they cut it to something like 8%, there’s still big upside in the stock. For now, I’m assuming the 10% figure is still achievable by the end of 2020. At that level, fair value P/TB should be around 1, or 2.2 times the current level.

Taking account of additional capital build in between, from retained earnings, that means I still expect the stock to more than double by the end of 2020. Once the first quarter earnings are out, and Sewing has had a chance to clarify any changes to strategy or financial targets, I’ll work out a new price target.

Deutsche Bank has changed its CEO. But it’s still a turnaround stock with substantial price upside. The capital shortfall and the worst of the legacy issues were dealt with by John Cryan. From this point, the immediate key to success remains phased cost-cutting, although revenue growth would be welcome as well.

The stock price will remain volatile, as I’ve consistently said since my first recommendation in July 2016. Recent events – both specific to the bank, but also due to general stock market conditions – have weighed on the stock price.

However, patient investors are still likely to be handsomely rewarded. Stick with the stock.