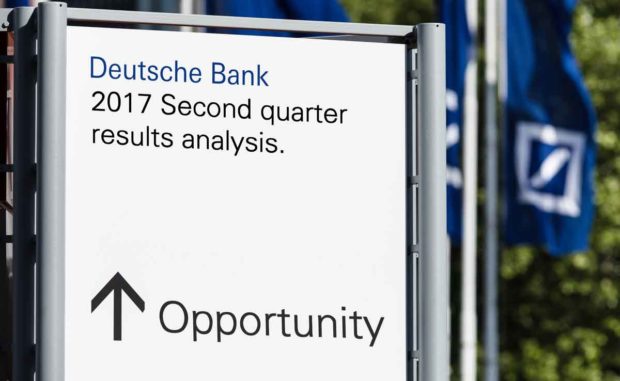 At the time of writing, Deutsche Bank (XETRA:DBK/NYSE:DB) stock trades at 15.38 euros (US$18.15). On Wednesday July 26th, just before second quarter results came out, it closed at 16.565 euros, which is to say it’s down 7.2% since the company reported. I think this is an overreaction to short term weakness in revenues, and yet another buying opportunity.

Certainly the results weren’t massively strong. But, once you dig into the detail, a lot of the apparent revenue drops were one-off effects. For example, due to previous business sales or closures.

The real revenue weakness was in parts of the business that are known to be volatile: sales and trading within the Corporate and Investment Bank. I estimate these businesses typically make up between one quarter and a third of pre-tax profit.

Because they’re unpredictable they should attract a lower valuation than more stable businesses, such as mortgages or corporate lending. So, in terms of their value in a stable state Deutsche Bank, they’re probably only 20% to 25% of the whole bank’s worth (and perhaps less).

CIB was 56% of total revenue in the first half, but the subset of sales & trading was a much lower 27%. The rest of CIB is made up of more predictable and/or less risky activities such as securities services, cash management, lending, capital raising and advisory work.

PCB was 35% of first half revenues. Also it includes the Wealth Management business (8% of revenues), which is really asset management for private individuals. Rejigging the divisions a little to group revenues by types of business and the first half split looks like this: 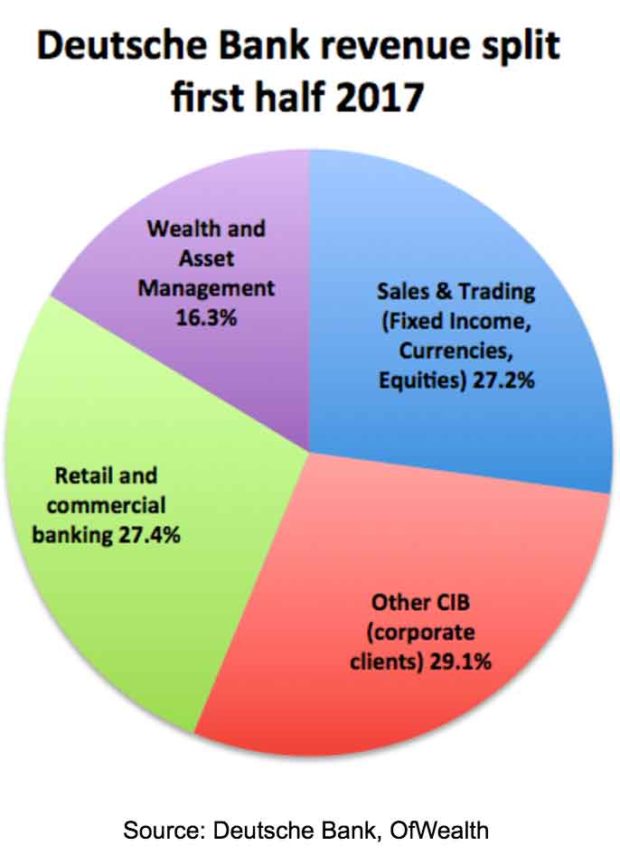 The point is that Deutsche Bank is still thought of as a trading shop by a lot of people. Whilst the bond, currency and stock trading businesses are still substantial, three quarters or more of the value of the overall bank comes from more stable activities.

That said, most of those activities still aren’t sufficiently profitable. Return on tangible equity (“tangible equity” being net assets excluding goodwill) is still kicking around below 4%. But that’s the whole point of Deutsche Bank stock: it’s a turnaround story.

Costs are being cut by reducing branches and staff levels. At 96,652, the number of employees is down 3% year-on-year and still falling. As new CFO James von Moltke said during the earnings call: “ We remain on track to achieve our 22 billion euro adjusted cost target by 2018.”

First half adjusted costs were 12 billion euros, which would be 24 billion annual run rate if left unchecked. Revenues were 14 billion, or an annual equivalent of 28 billion euros.

With so many moving parts it’s difficult to know exactly where the tax rate will be, but let’s assume a conservative 40%. That would leave 3.6 billion euros of net profit after tax next year, which is already 6.3% of the current tangible equity. Also, the target of cutting a further 1 billion euros of costs by 2021 is still in place.

I’ll get into what this means for the stock in a minute. First a quick look at the revenue figures that the market seems to have focused on so intently. The headline figures look poor, but a little digging reveals less to be concerned about.

One of the problems with bank revenue reporting is that a bank’s own bond liabilities are valued at market prices (“marked to market”). This means if confidence in the bank improves its bond yields will fall to reflect the lower perceived risk. Hence the bond prices will rise. The result is a higher reported debt liability on the balance sheet with an offsetting entry as a charge to revenue. (The opposite occurs if yields rise and bond prices fall.)

As confidence has returned, this has happened to Deutsche Bank. So it’s important to ignore the short term revenue hit from the bank’s own debt valuations when assessing the long term business prospects.

Underlying second quarter revenues in CIB were down 14% year-on-year. Within that, Global Transaction Banking was down 12% but according to the company around half of that drop was simply a change to internal allocation of interest costs (funding costs). The rest of the fall was split between deliberate business reduction (fewer clients) and margin pressure in a low interest rate environment. It’s only really that last part that’s a serious concern, especially if it continues into the future.

Note that GTB is a quarter of the “risky” CIB division, but in fact is made up of very stable and predictable businesses. During 2016 the quarterly GTB revenues fluctuated by just 4%.

Another steady CIB business is Financing, which is basically corporate lending. This was 5% lower year-on-year due to lower revenues from lending to higher quality companies in an ultra low rate environment. But the change of revenue between the first and second quarters was just one million euros – out of 555 million! Financing was another 13% of the “risky” CIB division’s first half revenues.

Also within CIB, revenues from Origination & Advisory were down 7%. “Origination” is bank speak for issuing bonds and stock for corporate clients (or governments) and charging a fee. “Advisory” mainly refers to fees from work on mergers and acquisitions. In particular, debt origination (bond issuance) revenues were down 24%, which the bank put down to lower market volumes and its own decision to do less US leveraged finance (junk bond) issuance.

Then there’s Sales & Trading, still within CIB. For Fixed Income and Currencies (FIC) the second quarter revenue was down 12% on the prior year. That said it was actually up 2% for the first half. For Equities it was down 28% versus the prior year quarter, and 18% for the half.

Clearly those were poor results, but this is the most volatile part of the business. Also, the weak FIC result was in line with certain competitors that also had a poor quarter, such as Goldman Sachs. Finally, FIC is more than twice as big as Equities at Deutsche Bank, and did okay for the first half as a whole.

Overall CIB had a reasonably weak quarter, but a lot of it was down to market conditions which could change at any time. One poor quarter in the most volatile part of the bank isn’t a reason to write off Deutsche Bank.

The other big division is the Private & Commercial Bank (PCB), which mainly operates in Germany. Headline revenue was down 7% year-on-year, but was actually flat once you strip out effects of businesses sold as part of the restructuring. There’s really nothing to see here.

Asset Management is the smallest division, but high value. In this case revenues were up 7%, which is positive.

Overall: some weak revenue spots, especially in CIB in tricky market conditions. But cost cutting remains on track and the turnaround continues.

Now let’s turn to valuation and upside for investors. The tangible book value per share was 27.80 euros at the end of June. That’s already 81% above the price of 15.38 euros. Put another way, the price-to-tangible book value (P/TB) ratio is just 0.55 at the current stock price.

Assuming the management achieves its stated aim of 10% return on tangible equity (ROTE) in future, this stock should achieve a P/TB ratio of around 1 within a few years, and possibly more.

Put another way, investors should more than double their money in the next few years, if Deutsche Bank management hits its targets. CEO John Cryan is as likely to achieve that as anyone in the business.

My original recommendation to buy Deutsche Bank stock was made back on 29th July 2016 (see here). That was when I reckoned market pessimism was excessive, and it was an even bigger bargain than today.

Since then, assuming participation in the 1-for-2 rights issue earlier this year and even with recent price weakness, investors have already made a profit of over 32%, as shown in this table. 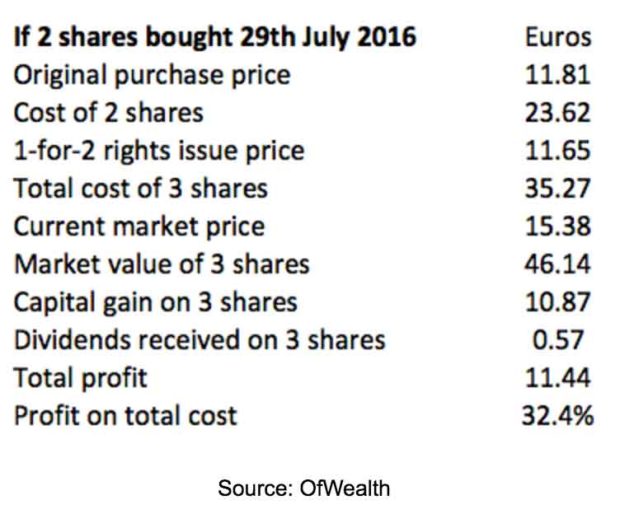 If you bought the shares back then I recommend you hold on. My latest estimate is for a total profit of 213% by the end of 2020.

That would mean more than tripling the investment in four and a half years. But I think there’s a good chance that the bulk of the gains could come much sooner if the management can keep increasing profitability, which should result in a higher P/TB ratio for the stock.

Whether you followed my original recommendation to buy Deutsche Bank stock back in July last year, or are looking at it for the first time now, I still think this is a highly attractive opportunity. It’s a turnaround story with a (still) deeply discounted price.

If you’re prepared to wait a few years, and are comfortable with substantial price volatility from time to time, Deutsche Bank stock offers the prospect of substantial profits.

BanksEuropeGermanyStocksValue investing
Previous ArticleAll ETF investors need to read thisNext ArticleWorld wealth: where it is and how it’s invested