During the fourth quarter of 2017, moribund market volumes hit its trading revenues hard. On top of that, US tax reforms caused a one time write-down of tax assets. The net result was DB reported another full year accounting loss.

In addition, DB’s largest shareholder – a Chinese conglomerate called HNA Group that owns 9.9% of DB stock – is reported to have a solvency problem. Traders think it may have to liquidate its position, adding further pressure to the price.

On top of that, results were reported on 2nd February, just in time for global stocks to fall around 10%. DB stock got sucked lower in the downdraft.

Both the drop in trading revenue and the tax write-down were industry-wide effects amongst DB’s banking peer group. But sentiment is so weak that DB stock suffered more than most.

Today I’ll set out why I think this is overdone. The stock remains dirt cheap, if you believe that its business turnaround will be successful, over a 2-3 year time frame. In fact, even if it’s only half successful there’s still loads of upside.

Most people seem to think that DB is dominated by high risk trading in bonds, stocks, currencies and derivatives thereof. That’s because the division known as the Corporate & Investment Bank (CIB) makes up a little over half of the whole bank’s revenues.

But, in reality, over half of the CIB division has nothing to do with trading at all. It’s made up of much more stable and/or less risky businesses such as lending, advising on mergers and acquisitions, cash management and things like stock custody services. (For more on how the business divisions are set up, see here.)

Once you rejig the revenues, switching from a divisional reporting view to a business activity view, DB takes on a whole new light. As shown in the following chart, I’ve just updated of the split of 2017 revenues. 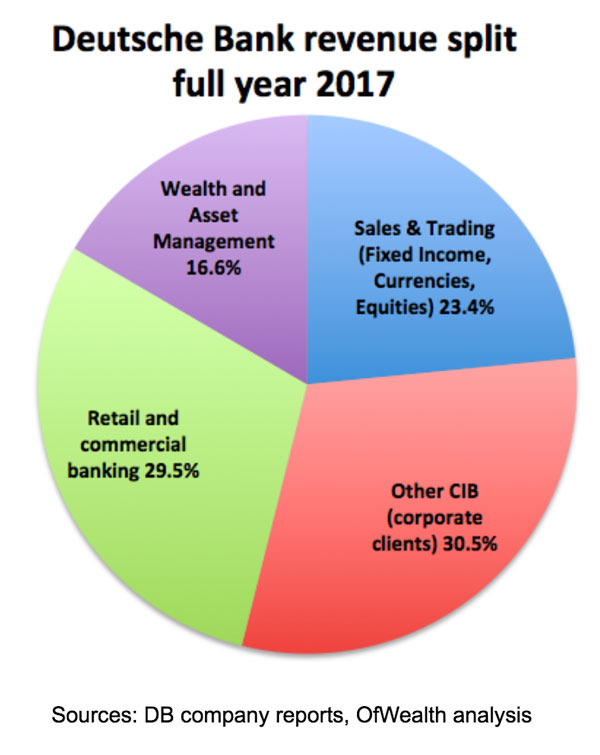 You can see right away that the trading businesses are less than a quarter of the overall revenue pie. This doesn’t mean they’re unimportant. But it seems that very few people understand how much of DB’s business has nothing to do with trading in securities and derivatives markets.

This means that DB actually has a much more stable business than most people realise. For example, German retail and commercial banking revenues really don’t change too much from quarter to quarter, or year to year.

So how did these businesses perform in 2017, in revenue terms?

First, let’s look at the revenues from businesses engaged in sales and trading of bonds, stocks, currencies and derivatives (roughly a quarter of the whole bank). On a combined basis, these revenues were down 16% during the year.

That’s bad, but it’s by no means worse than other big banks in the sector. It’s a short term drop that could reverse at any time if client activity picks up.

What about the other three quarters of the business, that apparently no one pays attention to? Once you exclude the effects of deliberate business disposals, as part of the streamlining, that lot works out basically flat year-on-year. Not a bad result with eurozone interest rates still pinned to the floor.

The merger of the German retail and commercial banks – Postbank and DB Germany (which were historically run separately) – is now finally expected to be made official in the second quarter (following regulatory approvals). Restructuring and cost-cutting should accelerate once that takes place.

Overall, the cost-cutting programme continues. Although, that said, there are ongoing investments in technology and restructuring that will remain a drag on profits for at least a couple more years. It’s clear from comments on the fourth quarter results call, made by both CEO John Cryan and CFO James von Moltke, that cost cutting remains a top priority.

That said, there was something that looked like bad news in the results. The bank had previously guided for around €22 billion of total costs in 2018, and is now saying it will only achieve around €23 billion. But, as always, the devil is in the detail.

Of that €1 billion difference, €900 million relates to delayed business disposals. These are happening more slowly than anticipated, but the plan is still to dispose of those businesses. In the meantime, they continue to generate offsetting revenues (meaning the drag on profits is less than the costs, or perhaps there are even profits).

Obviously, that’s a disappointment. But it should only be seen as a minor one. I’ve worked on many corporate deals in the past when I worked in banking, and you can’t predict the timing.

Deals can fall through on all sorts of legal or negotiating points. Sellers can’t force buyers to get on with it, at least not if they want a decent price. In any case, the same businesses remain on the block, according to Cryan.

Then there’s a €1.4 billion non-cash hit to accounts. This came from writing down US deferred tax assets. It resulted from changes to US federal tax law in late December, specifically reducing the tax rate from 35% to 21%.

This is, again, something that happened to varying degrees across banks with big US trading operations. It’s also practically irrelevant to prospects in the short term, and ultimately a positive.

I know tax is dull to discuss, but bear with me on this one. Many big banks made huge losses during the global financial crisis. Those losses can be offset against future profits for tax purposes, something known as “tax loss carry-forwards”, usually with a time limit.

In the meantime, how much tax can be offset in future is shown as what’s known as a “deferred tax asset” on the balance sheet. If corporate taxes fall, so does the amount of expected future benefit. Hence the tax asset write-down.

Put another way, say you had a $10 billion deferred tax asset that you expected to use to offset $10 billion of taxes due over the next ten years. Then the tax rate plummets, and you can only offset $6 billion of future taxes.

You have to write-down the asset in your accounts by $4 billion. But your net, after-tax future profits have not been affected. Also, deferred tax assets don’t count in bank regulatory capital calculations, so there’s also no impact on capital solvency.

In other words, the tax asset write-down is essentially irrelevant for valuation purposes. Of course, there’s bound to be some excruciating technical detail in the tax laws. But it’s really nothing to worry about.

DB has previously guided for a global tax rate in the 30-35% range. It’s now saying, with the US cuts, the lower end of the range is more likely. This is a longer term positive for profits and value.

What about the stock price?

That’s not much return so far, although the prices reached €14.79 and $18.65 in early February, before the recent drop. However, I’ve always said this was about riding out volatility and waiting for the multi-year business turnaround to take shape.

This means sitting it out until late 2020, or even early 2021. If that seems like a long way away, all I can do is say time and patience is often your best friend in stock markets. This stock could double or more from current levels, for those who aren’t in a hurry.

On the latest results call, CEO John Cryan confirmed the profitability target of achieving 10% return on tangible equity (ROTE). That’s a measure of post-tax profits as a percentage of tangible net assets (also known as book value or shareholders’ equity).

In the jargon, “tangible” just means net assets excluding goodwill. Goodwill is just an accounting quirk that crops up from past corporate acquisitions. In banking, ROTE is an extremely important ratio when assessing profitability and valuation.

If this bank gets to 10% ROTE, then it should trade with a price-to-tangible-book value ratio (P/TB) of around 1, give or take. It currently trades at a P/TB of 0.5.

Basically, the market is saying this bank will never improve its profitability. That’s where the opportunity lies. The stock could double or more over the next couple of years.

All it will take is continued cost cutting (automation, reduced staffing, more closed branches) and a little revenue growth. On the revenue side, for example, as eurozone interest rates eventually rise from about zero to something vaguely normal in relation to inflation, and trading revenues pick up again.

This will take time. But by 2020 I’d expect plenty of progress, and probably sooner.

Currently the tangible book value per share is €26.05. You can think of that as the bank’s liquidation value, on a per share basis.

That’s twice the current stock price. If ROTE was 10% today this stock would be worth double its current price.

In the meantime, book value itself will almost certainly grow as well in the next couple of years as profits are retained and added to equity capital. That means the eventual upside is more than double on a 2-3 year view. And there will likely be some modest dividends too.

DB has plenty on ongoing issues to deal with. But it’s working on them steadily and the turnaround continues. For anyone prepared to wait a couple of years, the stock has substantial upside potential in my view.

As long as short term sentiment remains so negative about this stock, and the business turnaround continues, it’s a great contrarian play.

BanksGermanyStocksTaxUSAValue investing
Previous ArticleMarkets wobble. What you should do.Next ArticleSavvy stock investors know this valuation secret – Part I of II