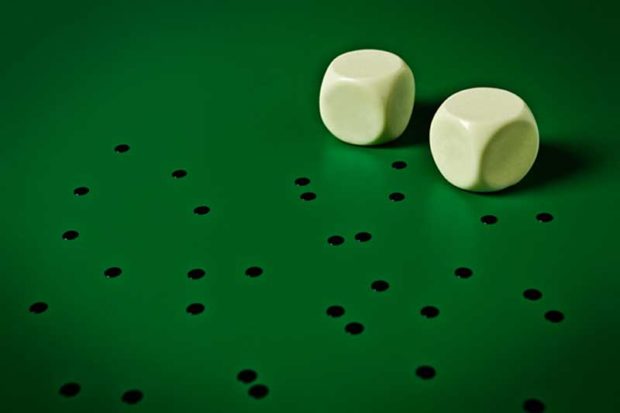 It’s time to take a sacred cow to the slaughterhouse. “Yield on cost” is a popular investment ratio. It refers to current dividends expressed as a percentage of the price paid for a stock, at some time in the past. As I’ll show today, yield on cost is at best irrelevant, and at worst leads to poor investment decisions.

Is yield on cost (YOC) a sacred cow? Well, it’s at least semi-sacred.

Whereas anyone with a financial training should know better than to use YOC, it’s still worshipped by plenty of investors. Many financial newsletter writers favour it as well, not least because it makes their past stock picks sound more impressive to the unwary.

By writing this article, I don’t expect to make many friends. My only aim is to expose the truth, about a measure that has no rightful place in the pantheon of investment analysis. In that way, I hope to encourage investors to steer clear of using YOC to inform any of their investment decisions.

Yield on cost is a simple (also simplistic) measure. It divides the current dividend-per-share (DPS) into the original price paid to buy a stock.

This differs from the current (and relevant) dividend yield. That’s DPS divided by the current stock price. If the same stock is now priced at $200, then the dividend yield is 2.5% ($5 as a percentage of $200).

On the face of it, a high YOC rate can seem comforting. Knowing you’re getting 10% on your initial outlay sounds better than getting 2.5% on the current price.

But that’s all it is – something that may make investors feel warm and fuzzy. However, it has no true informational value. I’ll explain why.

(Note: for simplicity, I’m going to ignore stock buybacks. When looking at stock income yields – whether YOC or dividend yield – investors should also take account of a company’s past and planned net stock buybacks. It’s important to use the net number, since many companies buy loads of stock each year, but also issue loads – often to corporate insiders.)

There are three principal things that YOC ignores, hence making it worthless. These are:

To help you start to understand the issues, I’ll switch from stocks to houses. Most people, understandably, find it intuitively easier to understand investments in houses than in stocks.

But, in the end, both are income producing assets that appreciate over time. Thus, looking at rental property provides a useful parallel.

Let’s say two people each own a house that’s worth $750,000 at current market prices. Each person rents out their house for a 5% yield, giving them $37,500 a year in rental income.

Now let’s say that the house prices have gone up by 4% a year, on average, since they were bought. That’s 3% due to inflation, plus a 1% annual premium.

Rates of house price appreciation vary widely between countries, regions and cities. Some barely match inflation, others rocket ahead well above it (just ask my parents, who still live in the same English cottage, near to London, that they bought in the 1960s…). But a small premium to consumer price inflation is fairly typical, hence my 4% rate for this example.

What’s the yield on cost for these houses?

The only difference is how long the properties have been owned. The longer the holding period – all other things being equal – the higher the YOC.

Here’s a table which shows different YOC’s for those houses, according to various amounts of time elapsed since purchase. You can see how the period of ownership makes a huge difference to the yield on cost. 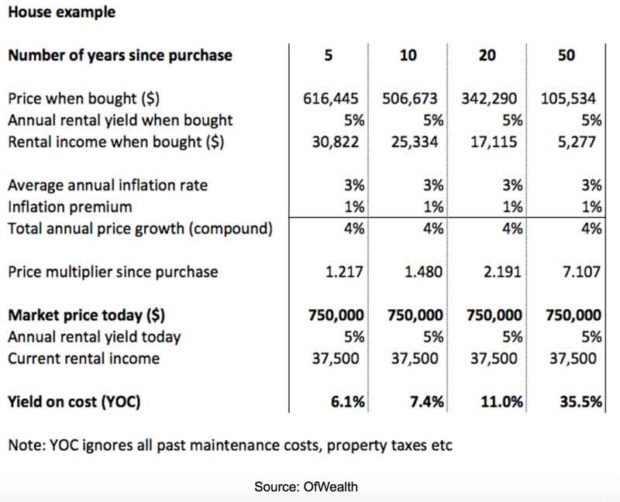 I’ll give you a personal example, in the spirit of reductio ad absurdum (reduction to absurdity). That’s easy to do, since I’ve lived in a high-inflation environment for the past decade, in Argentina.

When I moved here 10 years ago, I bought an apartment and paid US dollars for it, as is the local custom. I estimate that the dollar price has gone up by a factor of 1.71 over that time (+71%). If I rented it out, I’d probably make around a 5% rental yield. That gives me a dollar yield on cost of 8.6%.

However, over the same time, the Argentine peso has collapsed against the US dollar. That’s because peso-denominated price inflation was rife, peaking at around 45% a year in 2015 and 2016 (now down to the low 20s, and falling thanks to a new government).

The dollar bought about 3 pesos a decade ago. Nowadays, one dollar buys about 20 pesos. Converting the price of my apartment into pesos, both at purchase and currently, it means the price is up by a factor of more than 11.4 times (+1,040%).

Put another way, inflation rates and currency moves matter, and can make a big difference to YOCs.

Now, I know that’s an extreme example, but it’s the principle that counts. So let’s jump back to my earlier example of a rented house. Still assuming that the house prices go up by 1% above inflation over time, the inflation rate itself will have a huge effect on YOC.

Let’s say each house had been owned for 20 years. In inflation averaged 1% a year then the yield on cost today works out at 7.4%. If inflation was 7% a year in the past, then today’s yield on cost would be 23.3%.

Two completely different results, with the only variable being the inflation rate since the house was purchased. Here’s another table with some examples, each over 20 year periods. 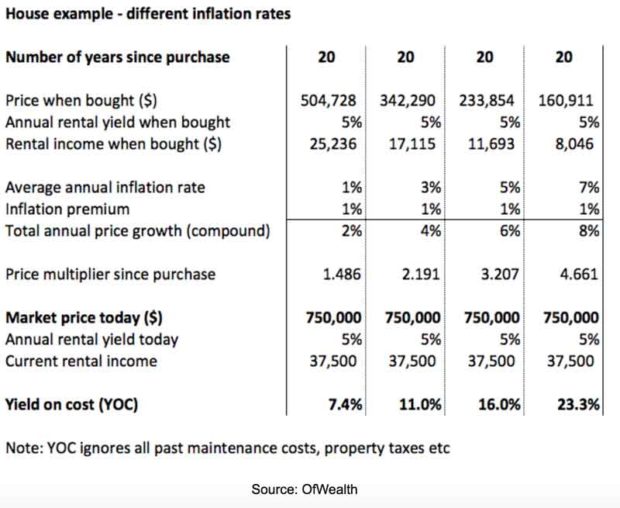 Along with the time since purchase, that’s already two good reasons why YOC is meaningless. Now let me turn to the third.

Most calculations of yield on cost take no account of additional outlays since purchase. For a house, that would include things like ongoing maintenance costs, home insurance and annual property taxes.

Those can really add up over long ownership periods. If they’re left out then the YOC becomes even more misleading than it already is.

The same is true for stocks. If you own stocks, you have ongoing costs such as custody and account fees charged by your broker. If some portion of those fees aren’t allocated to every single stock position, which is hard to do, then the YOC of a stock is calculated incorrectly.

As well as that, received dividends may have been reinvested in more stock purchases along the way. If you originally paid $10,000 for some company stock and are receiving annual dividends of $1,000 on your entire current stock position then the YOC appears to be 10%.

I’ve now explained the three major flaws with YOC, mainly using a rental property as an example. Now let me show you how it’s exactly the same with stocks.

Over the ultra long-run, since 1900 and based on my own analysis, returns from US stocks have come from three sources (figures rounded for simplicity):

Inflation and real EPS growth drive capital gains, adding up to 4% a year on average. (I’ve ignored changes to valuation multiples, such as the P/E ratio, since the annual effect of these tends to zero in the ultra long-run.)

This means that I can use the same return figures for a typical stock example as I used in the typical house example. Those are price rises of 4% a year and a dividend yield of 5%.

Here are the figures for different holding periods, using a current stock price of $100 instead of a house price of $750,000. All other inputs are the same as my first house example. 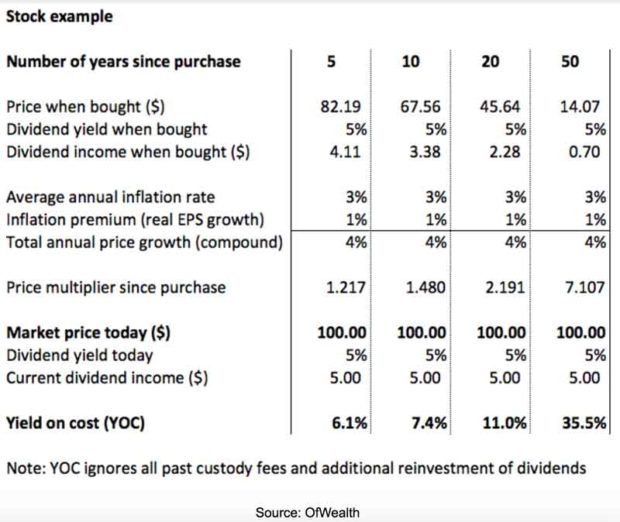 Relying on yield on cost puts investors at risk of clinging to dud investments.

Just because something has a high YOC after many years of ownership, and even if it’s performed well in the past, that doesn’t mean it’s a good investment today. There are far better ways to decide what to keep or buy.

Instead of using yield on cost, with its historical vagaries, investors must use current measures if they want useful information.

All in all, it’s current metrics of yield, company growth prospects and valuation that count. Not something rooted in the ancient past.

The obvious conclusion: yield on cost is a terrible way to judge current investments. It’s long overdue for the slaughterhouse of financial analysis.

It contains no useful information when deciding whether current stock investments are attractive or not.

I strongly encourage you to ignore it.