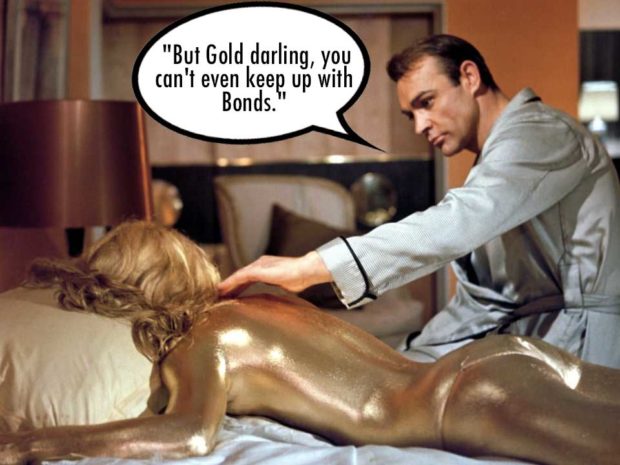 This week we’re investigating the claim that gold has been a better long term investment than US stock market. For all gold’s allure, it seems highly unlikely that an inert agglomeration of atoms, no matter how dense or shiny, could add more value than decades of capitalist endeavour. Let’s look at the evidence.

But when should we start? What is the “long run” after all? Well, I’m going to chose the time since 15th August 1971. That’s the day that the US government decided that US dollars could no longer be converted into gold at a fixed rate.

In other words it’s when the gold price was allowed to float against the dollar for the first time. August 1971 marked the bitter end of the US “gold standard”. (By some minor, or possibly major, personal coincidence it also marked the month that I must have been conceived…)

Since the US left the gold standard a period of 44 years, 5 months and 21 days has elapsed. I think that more than four decades must qualify as the long run. In any case, before that date the dollar gold price was fixed, which makes the data pretty much irrelevant.

Gold has a reputation for matching inflation in the long run, at least when it comes to basic needs. A fine suit of clothes or a loaf of bread supposedly costs more or less the same these days as it did in Roman times, when measured in gold ounces. (The same can’t be said for a CD player or computer bought in the dark ages of the 1980s. They’re a lot cheaper now.)

Between 1913 and 1971 the average rate of US consumer price inflation was about 2.5%. (There doesn’t appear to be US inflation data before 1913.) Clearly gold wasn’t allowed to perform its role as an inflation hedge under the gold standard regime. Consumer prices rose, but the dollar gold price didn’t – because it couldn’t.

Since 1971, with gold and the US dollar bobbing up and down against each other in a world of floating fiat, inflation has averaged 4% a year, at least according to official CPI statistics. More on that later…

In any case, there’s reliable data on US stock market performance going back to 1871, which is to say 100 years before the dollar and gold were cut loose from each other. Given that US stocks went up for those 100 years when gold (mostly) wasn’t allowed to I’m actually tipping the balance in favour of gold by starting from the moment when it was set free. It’s like we’re betting on a doped up Lance Armstrong to once again win the right to wear the (golden) yellow jersey in the Tour de France.

Put another way, the return on gold was over twice as much as the 4% consumer price inflation over the same period. Pretty impressive stuff.

So gold’s up just over 32 times since the peg was broken. That works out as an average return of 8.1% a year, with compounding (profits on the profits). Put another way, the return on gold was over twice as much as the 4% consumer price inflation over the same period. Pretty impressive stuff.

There you are. It’s a done deal. Gold has significantly outperformed the S&P 500 over the long run.

Or has it? Wait a minute – we forgot something important. Investors in stocks don’t just get capital gains. They also get dividend income on top. Gold investors get no income.

Over the same period the average dividend yield on the S&P 500 was just shy of 3%. Adding this to the capital gains would clearly tip the balance back in favour of stocks.

It works out that $1 invested in August 1971 would have turned into $71.28 today. Gold returned 8.1% a year, which is 2% a year less. But because of compounding over a long time frame the total difference is huge. $1 invested in gold would be worth $32 now.

In other words stocks, as measured by the S&P 500 index, have returned more than 2.2 times as much as gold since the US left the gold standard in 1971. And despite their high prices today, stocks are likely to continue to outperform long into the future.

Sorry gold. You may look pretty, but you can’t beat capitalism when it comes to profit generation.

Wait a minute. Hold your horses. Don’t we need to think about taxes as well?

Let’s say we’d bought both gold and stocks in 1971, and still owned them today. And we’ve bought additional stocks with our dividend income along the way. Since we haven’t sold anything we wouldn’t have paid any tax on the capital gains.

But there would have been income taxes to pay on the dividends. Exactly how much is impossible to say. Tax rates change over time, and different taxpayers have different circumstances (how much they earn, nationality, where they live, etc.).

To get an idea of the impact I’ve done the calculation again using an income tax rate of 30%. In other words, in each year I’ve taken 30% off the dividends that are reinvested in the stock index.

This takes the return on stocks down to 9.1% a year, a reduction of one percentage point a year. At that rate, $1 invested in August 1971 would be worth $49 today, still well ahead of gold’s $32. Adding or subtracting 10 percentage points to or from the tax rate subtracts or adds about 0.3% to the average annual return.

So is gold’s loss in this race simply a function of its multi year bear market occurring at that same time as a multi year bull market in US stocks, which has left them overpriced?

I don’t believe so. In fact I’d say that stocks will always be the better performers in the ultra long term, even if gold can do better in the short to medium term from time to time (and this may be one of those times: as we go to “press”, gold’s up 10.4% year-to-date, whereas the S&P 500 is down 9.2%).

What this means is that when the price of gold was released into the markets it had to make up for 38 years of pent up price inflation, and expectations were for a lot more in the short term. It’s perhaps no surprise that it shot out of the traps like a greyhound on amphetamines that had just had a cattle prod applied to its hind quarters.

If we discount the initial jump start that gold had then its performance against stocks looks far less impressive. In fact it’s pretty much in line with what we should expect – something that more or less hedges for price inflation over the long run.

Following the same process as before gold is up 9.25 times or 5.7% a year (compared with 4% a year official consumer price inflation – adding weight to the idea that inflation is under reported by the government). Untaxed stocks are up 56.7 times or 10.6% a year. Deducting 30% income tax on the dividends brings that down to 41.3 times or 9.7% a year.

Once we strip out the initial gold jump, it underperformed stocks by 4% a year, assuming 30% tax on dividends. This means, with compounding, stocks were up four and a half times as much as gold over 40 years.

It’s clear that gold underperformed US stocks since August 1971. But if we strip out the initial jump in the gold price, after 38 years of pent up inflation, the subsequent performance drops way behind stocks. Even those who rightly point out that US stocks are currently overpriced don’t then have a leg to stand on if they claim gold is the better long term performer.

Gold would need to go to the moon, or stocks would have to plumb extraordinary and unprecedented depths, for the positions to be reversed. The reality is that stocks are the more profitable long term investment. Most of the time.