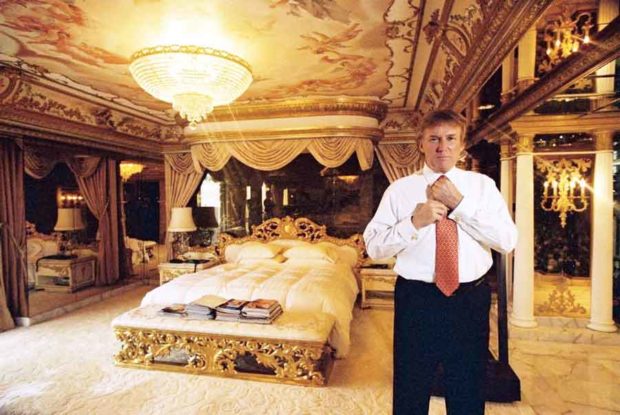 American voters have said “you’re hired” to the apprentice politician, Donald Trump. The gold price jumped on the news. Which is pretty appropriate, given how the golden-haired Mr. Trump likes to smother his penthouses in gold leaf. Perhaps connected to this, perhaps not, a reader asked me what would happen if the US dollar collapses. Would people buy groceries with gold?

Regular readers know that I recommend keeping up to 20% of your wealth in gold, preferably of the physical kind (bullion coins and bars).

(If you haven’t seen it yet, you’ll find the full story about why and how you should own gold in my special report “The best ways to invest in gold: the ultimate consumer good”. Click here to download.)

Financial crises are frequent, and likely to become more so in a world drowning in debt. Physical gold is one way to protect yourself.

But how would it actually work? A reader asked me the following:

I’m thinking about investing 5% or so of my portfolio in physical gold but have one question I don’t know the answer to. In the event of a currency collapse (the American dollar) what do you actually DO with the gold. If you sell it you get worthless cash? And who is going to buy the gold? I’m presuming you don’t go to the grocery store and buy food with little gold wafers?

Thanks Rod, those are good questions.

Since I now live in Argentina, which is pretty much the financial crisis capital of the world, I have some personal insight into living with a weak currency.

Argentina has suffered some major currency collapses over the decades. So Argentines save in US dollars instead of Argentine pesos (US$100 bills are everywhere). They also keep a lot of their wealth overseas.

I moved here in 2008 about two weeks after Lehman Brothers, a US investment bank, had gone bust. The world’s financial system was on the brink. Argentina actually looked relatively safe for once.

But the government at the time, headed by “La Presidenta” Cristina Fernandez de Kirchner, was from the usual populist and incompetent mould. It didn’t take long for things to become complicated.

Consumer price inflation has been rife in recent years, running as high as 45% a year. A cup of coffee cost about five pesos when I arrived. Now it’s five or six times as much.

The Argentine peso has lost about 80% of its value against the US dollar in that last eight years. No wonder that the locals prefer dollars. Mind you, the dollar has lost about 40% against gold over the same time, so they’d have done even better with bullion.

This period hasn’t been one of hyperinflation, which last happened here in the 1980s. But it was heading that way before the government was kicked out late last year. In any case it’s certainly has been a period of very high price rises and a rapidly weakening currency.

Everyone knows not to trust currencies like the Argentine peso. But what if the US dollar and other “stable” currencies also collapse?

To be clear, I don’t think that a complete collapse of the dollar is either likely or imminent. But a meaningful fall is always possible. Just ask the Brits, who have seen their pound fall by a fifth since June. Owning gold is one form of protection against that.

Why don’t I think a complete dollar implosion is around the corner? There are three main reasons.

But I could be wrong. So let’s get back to Rod’s questions about what you actually do with your gold in the event that there is a currency meltdown.

First of all, it’s unlikely that people would use gold for small, everyday transactions – the gold wafers at the grocery store, or even coins. Instead you would sell small amounts of gold as and when you needed the money. Even in a currency collapse “worthless cash” retains its role as the means of exchange on the street.

On the other hand, for big ticket transactions gold could end up being used to make purchases. In the same way that Argentines routinely hand over stacks of US$100 bills when they buy real estate or cars, perhaps sellers of larger items would begin to accept gold as payment, or part payment.

Who would buy the gold if you wanted to sell it? I imagine just about anyone with excess cash and a pulse. Private individuals, small business owners and investors for a start.

You could do private transactions with close friends and family. Or go to gold dealers, whose business would be booming. If you had bullion stored in a vault it would also be in high demand.

Remember – the gold market is huge, global and highly liquid. There will always be a buyer.

But what if an increasingly desperate government bans the private ownership of gold? Both the US (1933-1974) and China (1950-2004) have previous form in this regard, and no doubt other countries too.

It would be difficult for any government to discover coins-for-cash transactions on the black market, which would likely thrive in such a scenario. But clearly that has the downside of breaking the law.

Another solution is to own gold bullion stored in overseas vaults, which these days can be bought easily online. It’s much harder for governments to get their grubby hands on your assets if they’re in another jurisdiction, even when they know that you have them.

(I suggest you check out bullionvault.com, which I reckon has the best combination of choice of vault locations, low fees, ease of use, and service levels.)

And don’t forget that necessity is the mother of invention. History teaches us that prohibition doesn’t work. People find a way.

You can never get 100% protection from government ineptitude, financial crises, currency collapses or oppressive new restrictions of market freedoms.

But you may as well do what you can before it’s too late. Something is a lot better than nothing.

Owning some physical gold – both at home and overseas – is a great way to start.