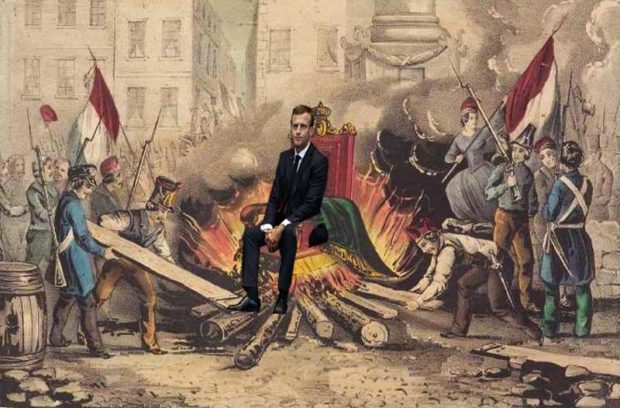 Let’s see…stocks are up a bit today…gold is edging higher ($1,245 per ounce)…Argentine airline pilots are threatening to go on strike. All seems to be in order.

Bloomberg reported some positive news in the ongoing US-China trade “relations”. Citing “sources”, it says that China is considering cutting tariffs on cars imported from the US to 15%. Currently they’re 40%, following a July hike in retaliation for US tariffs. For reference, the US charges 27.5% on Chinese car imports.

If this happens, it would send a positive signal that China is willing to deal, and that a trade pact can be reached between the world’s two largest economies. Although, somewhat ironically, when it comes to American-made cars that are shipped to China, it’s the German manufacturers that play the biggest role (see the red bars in the following chart). 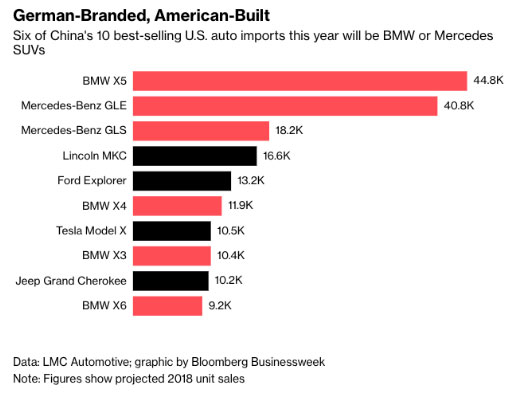 In Europe itself, the latest chapters of the continent’s “grim future” continue to play out…with weeks of mass riots in France and the ongoing political mess that passes for a negotiated Brexit. More on those in a minute. First, a dip into Argentine wine country…

A trip into wine country

At the weekend, myself and a small group of friends headed over to the province of Mendoza, one of Argentina’s main wine regions. Despite living in Argentina for 10 years, somehow I hadn’t got around to going there before. Having received an invite, it was a good opportunity to correct a gap in my travels. 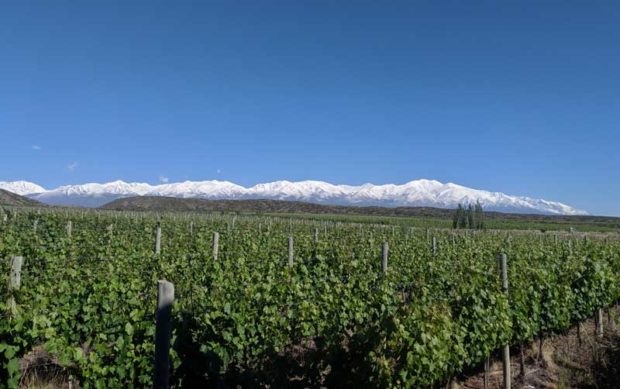 Argentina is famous for producing Malbec red wine, and also its unique Torrontes white wine. But it produces a lot of other varieties too.

Where we were staying was mostly flat, fairly arid, around 1,300 metres (4,300 feet) above sea level, and with rocky soil (which aids drainage). In the distance, the snow-capped edge of the Andes mountains ensured that every stop had a pleasant view.

Beautifully maintained vineyards were interspersed with patches of rough scrubland. The scrubland was covered in the kind of tough, hardy, shoulder-high greenery that looked like it had no intention of being uprooted. These were the last Mendozan holdouts to the world’s insatiable taste for fermented grape juice

Most of the scrub had been removed along long ago, like inconvenient vagrants found sleeping in the doorways of banks. It had been replaced with neat lines of vines, as far as the eye could see. More land will be developed in future, just as soon as enough new capital comes along. Or, as one person I met put it, “when another billionaire wants to lose some money”.

That’s because a lot of the vineyards are owned by wealthy foreigners…and wine is a capital-intensive business with a lot of upfront costs. You’ve got to buy the land, grub up the local plant life, clear the bigger rocks, prepare the soil, fix up the supports for the vines and plant the vines themselves. Then, eventually, you’ll get enough grapes. Which, unless your plot is big enough, still have to be harvested by hand.

But that’s just the start. Then you’ve got to build the barns and other buildings, buy the crushing and juicing machinery, invest in huge storage vats, source some French oak barrels and leave your wine sitting around for years to mature.

(Apparently only French oak is acceptable in wine circles…something to do with its dense grain. I know this because I asked at several different wineries why it was used…cross-checking the responses until I was satisfied.)

Then, once you’ve actually got some decent wine, the real challenges start. You’ve got to brand it, bottle it, label it, ship it and market it. Clearly, to be a successful winemaker, you need dedication to your art. But I’m grateful that many people choose that vocation.

Our group of friends was a mixed one. An Argentine, a Colombian, an American and a Brit (yours truly)…all long-time residents of Buenos Aires. But we met people from plenty of other places at various wine tastings.

One of our guides, under interrogation, told me that most international visitors come from the US (presumably, to check out some of the wine competition) and Brazil (presumably, because they have no competition at home). But, Europeans are common too (we met some Germans one evening).

There were certainly plenty of Americans there, who all appeared to be having a good time. It’s difficult not to, when the sun’s shining and the wine is flowing. By coincidence, all the American groups we met came from California. It must have felt like a home from home, just with evening dinner served at a much later hour (and cheaper prices).

Anyway, if you’re ever tempted to head to South America, I can certainly recommend a few days in Mendoza. Argentina’s a big place with plenty of variety of climate and geography (after all, it’s the eighth largest country in the world, behind India). But Mendoza is worth including in any itinerary.

Back in one of the original cradles of modern viniculture, things got messy in recent weeks. In France, mass protests and riots by the “yellow vests” have put many French cities into lockdown, including central Paris. Here are some handy protest stats from the BBC:

Initially, much of the media tried to paint the protests as being a “far right” project. But it soon became clear that this lazy label wouldn’t wash. Instead, the protests attracted people from all ends of the political spectrum, suggesting a general malaise in French society.

A short film that I saw, by a BBC journalist, included interviews with many supporters of the protests. One such interviewee was a middle-aged trade-unionist. When called a socialist, he was quick to clarify that he was, in fact, a Marxist. Another was an anti-immigrant French nationalist. But both are united under a yellow banner!

French President Emmanuel Macron, faced with chaos, has caved in. He’s delayed the fuel-tax hikes that set the whole thing off, cancelled a planned tax increase on pensioners, removed tax on overtime pay, and hiked the minimum wage by 7% (or €100 per week). Also, in true Latin-American populist style, he’s asked private businesses to pay everyone a year-end bonus.

The French budget deficit is now expected to reach 3.5% of GDP next year, which…incidentally…is higher than the 2.4% Italian proposal that recently caused so much tension in Brussels. Should we now expect the Italians to go for broke…perhaps literally? (Italian government debt is already 133% of GDP.)

This is just the latest manifestation of the upheaval in European politics, with the establishment being challenged at every turn. The last time European politics was so confused was between the world wars. People that labelled themselves one day as “anarchists” or “communists” or “fascists” would often switch allegiance the next day.

At that time, the underlying theme was a sense of dissatisfaction with the leaders of the day, and a search for something new. As we know, they often found something new, but actually worse. Many European countries seem headed down a similar route today, although hopefully not so extreme. (Not least, because people genuinely have less to complain about than in the 1920s and 1930s.)

And then there’s Brexit. British Prime Minister Theresa May, faced with likely defeat in the House of Commons, has delayed a vote on the deal she’s struck with Brussels. She says she wants to renegotiate a few points. Meanwhile, Jean-Claude Juncker, President of Something-or-other-in-the-EU, has said there’s “no room whatsoever for renegotiation”.

The political stalemate continues. Meanwhile, the British people – whether for or against staying in the EU – look on aghast at the incompetence and infighting of their entire political class.

But what about the bigger picture? The events in France and Britain are just the latest chapters in Europe’s drawn-out slide, underpinned by dreadful demographics and high levels of debt. Be prepared for a long and epic saga…and don’t expect a happy, Hollywood-style ending.