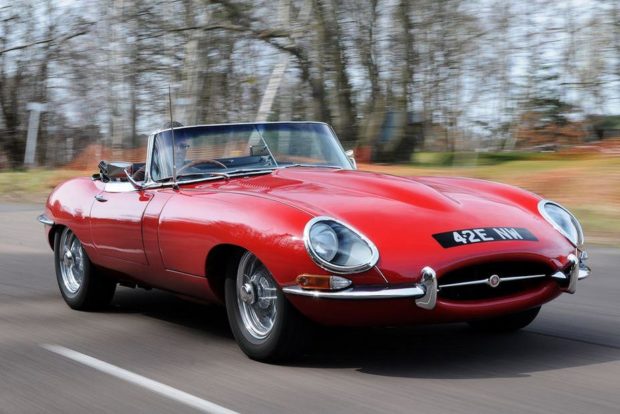 At home I have a framed black and white photo of myself when I was just one year old. In it I’m sitting on a concrete driveway. Behind me are a car engine and a large drum of engine oil. My hands and feet are black with dirt, but I’m smiling from ear to ear. Cars still make me smile four decades later. But owning a car means either expensive consumption or a pleasant hobby. Even collectible classics should never be seen as investments.

My dad has always maintained his own cars. He saved the original capital to start his small business by buying old cars, fixing them up to good running order, and selling them on for a profit. The day he took the photo I was “helping” him while my mother was out running errands.

Needless to say she was unimpressed when she got home. I was pretty filthy, the youngest of four children, and I don’t think we even had a washing machine to do the laundry back then. But perhaps that day was the start of my interest in cars, passed on from father to son.

So, it’s time for a confession. I admit to suffering from a mild case of petrolheadus youngmanus, but I’m mostly over it now. Which is good news, because an unhealthy interest in cars can be an expensive thing.

A reader called Peter wrote to remind me of this after last week’s article about how cutting a little from spending can result in a big increase in retirement savings. (If you ever have any comments, observations, questions or suggestions please send them to robmarstrand@ofwealth.com – I’d love to hear from you.)

Peter talked about how, as a young man, he had learnt the hard way about the cost of cars. He also talked about others who hadn’t: “Someone I know just had to have a red Ferrari in the garage, which was rarely driven but polished a lot, and lightly mentioned in the right circles at the right time. When a cash flow problem hit he dumped the latest one for £30,000 less than the £130,000 he had paid not eight months before.”

Clearly this person took a big hit, losing 23% of the price paid in just eight months. Apparently he was also living beyond his means, since it was a forced sale.

But it doesn’t have to be a flashy Ferrari for the same principles to apply. Even standard family runarounds lose a small fortune in depreciation as soon as they leave the dealer’s lot.

A number of years ago I was looking for a large car. I needed to cart around a young family with all the essential equipment that that entails – infant seats, pushchairs (buggies), travel cots, bags of clothes and toys – you name it. I also needed the option of seven seats for when overseas in-laws were visiting.

After researching the market I settled on what looked like the best value model that fitted my needs. It was a well made but not prestigious brand. That meant it was 40% cheaper than competing models with the same specifications.

Unfortunately it was a recent model, but my needs were immediate, so I decided to buy it brand new. My reasoning was that I planned to keep it for seven or eight years, and perhaps more. And since I was already going for a cheaper option the inevitable depreciation wouldn’t be too bad, once it was spread out over that time.

But a couple of years later my plans suddenly changed when we decided to emigrate to the other side of the world. So the car was sold after just three years to one of my sisters.

She agreed to pay me about 60% of what I had paid new, which was the market price. She definitely got the better deal, saving 40% by buying a low mileage vehicle.

This example shows why it’s best to avoid brand new cars and their vicious initial falls in value. I once bought a car that was just one year old. As far as I was concerned it was as good as new, but I paid a third less than list price and saved thousands in the process.

You’ll probably buy 10 to 20 cars over five or six decades of adulthood. The savings from avoiding brand new cars will add up to many tens of thousands of dollars over that time.

You’ll probably buy 10 to 20 cars over five or six decades of adulthood. The savings from avoiding brand new cars will add up to many tens of thousands of dollars over that time. That’s money that you can keep and invest for retirement.

So much for modern cars that we use every day. But what about rare and desirable classics? Well, I have some experience there as well.

Many people claim that classic cars make great investments. As with many mainstream investment claims I disagree. Classic cars can certainly be fun to own, but they should never be seen as investments for profit.

Years ago I owned a 1960s Jaguar E-type, also known as the XKE. It’s the model that Enzo Ferrari famously called “the most beautiful car ever made”, which was praise indeed from a man who designed plenty of beautiful cars of his own.

Perhaps it’s no surprise that the E-type was a big favourite of the “jet set” during the 1960s and 1970s. My parents had space to spare, so I bought one as something for myself and my Dad to enjoy. I never really saw it as an investment.

That said, the car doubled in value over the seven years that I owned it. So on paper I made a healthy profit. Sounds good, right?

Unfortunately it’s not that simple. These things come with costs. There’s insurance, replacement parts, maintenance, storage, the dealer’s commission and sales taxes to pay for. Once you add it all up you need a really big increase in the price to make any kind of profit.

In my case I had a great insurance deal that only cost a couple of hundred US dollars a year, free storage at my parents’ house and a free mechanic for all the routine maintenance – my Dad.

The car was in excellent condition when I bought it. But after a few years it still needed some paintwork to prevent a bit of corrosion from getting worse. I discovered that getting a high quality paint job doesn’t come cheaply. And there were a few other minor things that needed replacing along the way. Classic cars don’t depreciate, but maintenance costs are much higher than new cars due to their age.

My Dad and I really enjoyed our time using the car. Once we spent a week travelling around in it visiting interesting places that we wanted to see. Just him and me having some man time together. It’s impossible to put a price tag on the memories from that trip.

But after a while I decided the time had come to let the car go, before anything major went wrong with it. I’d got off relatively lightly so far. So it went back to the same specialist dealer that I’d bought it from. He sold it on for twice the original price that I’d paid. But the cash I received was net of his commission and government sales taxes.

You might think I should have sold it privately for more money. But I did my research, and I was still paid more than I would have got in a private sale. That’s because the dealer was (and still is) the “go to” man for this particular model. He knew the full history of the car, and is trusted by his customers. So he gave me a full and fair price, knowing he could still sell it on at a premium.

Taking away my other ownership costs from what he paid me I more or less broke even after seven years. Speaking to other people that have owned classic cars – some with collections running into dozens of varied vehicles – it sounds like my experience was typical. And that was during a period of strongly rising prices.

Whatever you read in the media about the great profits to be made from owning desirable old vehicles the reality is more mundane.

Classic cars are not serious investments. They are pleasant hobbies to be enjoyed with family and friends.

Don’t ever make the classic mistake of confusing the two things.