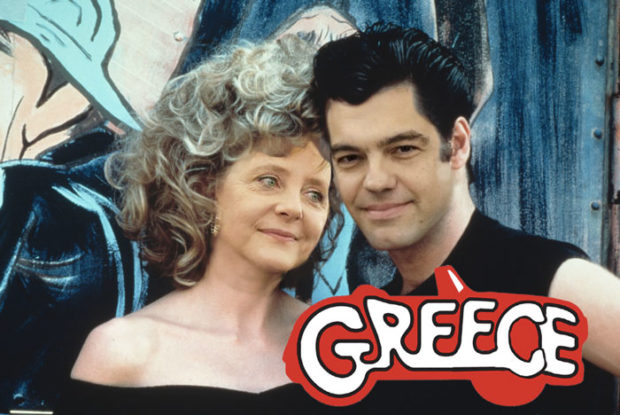 Recently I made a startling discovery. I found a stock market that’s down 50% in US dollar terms since the end of 1987 – a span of nearly three decades. And no, it’s not Japan. This dog of a market is also down a staggering 95% since its all time high in 2007 and is still falling. So is it now a bargain or still a basket case?

The stock market in question is…drum roll…none other than Greece. Specifically it’s the MSCI Greece index.

Here’s the chart of that index since it was launched in 1987 (in green), with the MSCI Japan index for comparison (in orange). We’re comparing apples with apples here, since both are measured in US dollars. 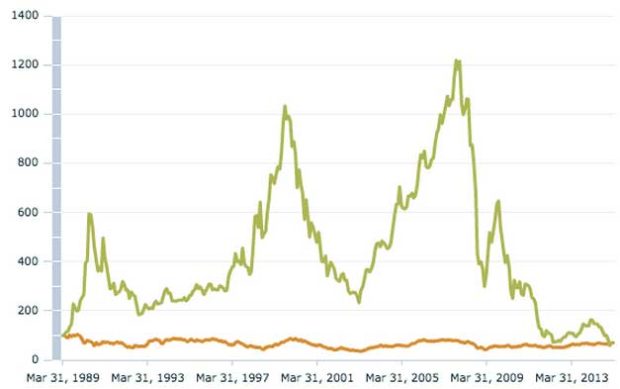 You can clearly see that it’s been far from plain sailing. The Greek stock market has had three major bubbles over the period. The towering peaks were in June 1990, September 1999 and October 2007.

Each of these cycles was characterised by massive and quick run up followed by a brutal and fast bust. For example, the market rose 494% between December 1987 and June 1990, only to fall 69% by October 1992. The net rise was still 84% in less than five years, but the swings were huge, and undoubtedly unsettling for those investors involved. In fact if you bought after late 1989 then you made a loss by late 1992.

But the biggest cycle of all was the latest one. The market rose 423% between the March 2003 low and the October 2007 high. It then fell 75% by March 2009, recovered until October that year, and then plunged again. Overall, it has fallen 95% since the October 2007 high and appears to still be headed down. Here’s the MSCI Greece index chart since January 2007. 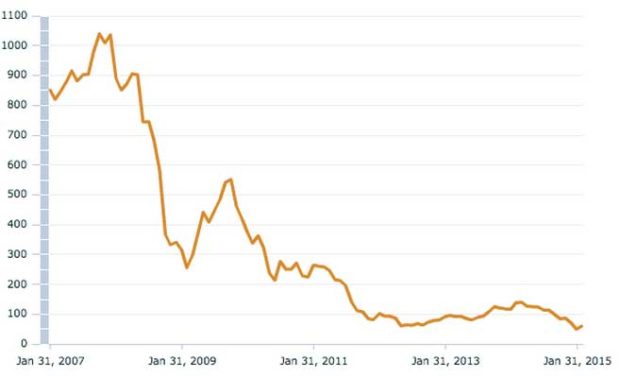 That’s a fall of staggering proportions. Inevitably, the question we have to ask is whether Greece is now a bargain.

My answer: probably not yet.

The thing is, for reasons I’ll explain this market could easily fall another 30-60% from its current level, when measured in US dollars. Just because something has already fallen by 95% doesn’t mean the remaining price can’t still be cut in half. I know someone who made a lot of money on Argentine stocks in the late 1980s, during a period of hyperinflation, by understanding that simple insight.

Here at OfWealth I wrote about Greece’s depression and huge debts on 11th April, 2014 (see “Bombs, beaches and bonds”). I was amazed that the Greek government had just managed to issue five year bonds with an interest rate (yield) of just 5%. It seemed insane that bond buyers would accept such low returns in such an evidently risky situation.

Since then the Greek five year yield has leapt to 17.26%. This means those that bought the bonds have taken a big loss at market prices (when bond yields rise, prices fall and vice versa). Greece remains deeply troubled.

More recently a newly elected socialist government wants to renegotiate the country’s debts and roll back previous austerity measures. Amid accusations of “lazy Greeks” and “Nazi Germans” – traded in the media, if not necessarily in official discussions – it’s fair to say that things haven’t exactly been going smoothly. The supposed harmony between the nations of the European Union is undergoing its toughest test yet.

The euro, a common currency shared by 19 countries including Greece, is supposed to be a core element of what binds the European Union together. It’s meant to facilitate trade between euro members, centralise control of the money supply, and place constraints on government budgets. Right now it’s the root cause of a lot of tension.

The chance of a “Grexit”, the unpleasant term coined to describe a Greek exit from the euro, could be over 50% at this late stage. Although things may get patched over for a while, in the style that European bureaucrats have used to such hesitating flair in recent years.

Across all developed countries the name of the game is to not face up to the deep seated problems, but instead to kick the can down the road a little further and hope for the best. But eventually reality has to bite.

When you get down to it, Greece’s real choices are bleak if it wants to escape its grinding depression. Option one is to keep the euro but default on the debt. Option two is to leave the euro and default on the debt. Debt default is a messy business, so no one wants to take responsibility for letting it happen under their watch. So the day of reckoning is delayed as long as possible.

The Greek government has given assurances, with the backing of public opinion, that it wants to stay in the euro. But back in the real world if a default is the, er, default option then combining it with an exit from the euro would be better for Greece.

This is because currency devaluation, of say 30% to 50%, and reintroduction of a new drachma (the old Greek currency) would restore Greek competitiveness on global markets.

For example, tourism is big business in Greece – about 18% of GDP. So if you had the choice between sunning yourself on a Spanish beach or paying 40% less to do much the same on a Greek beach, which would you choose? My guess is that most sun seeking Northern Europeans don’t really care what language the cocktail waiter speaks. Just so long as he can bring them a decent piña colada.

Now, this isn’t to say that devaluation would be some kind of panacea. Greece’s deep seated problems, such as sky high unemployment, wouldn’t disappear overnight. But it would be a big helping hand – not just for tourism but also for exports of agricultural products and manufactured goods.

In the short run leaving the euro and devaluing would undoubtedly cause another sharp leg down in the Greek stock market, in dollar terms. Suddenly Greek assets would be worth much less, and prices would plummet in the panic.

In the aftermath, once the initial shock had passed and the dust had settled, we would be presented with a fantastic time to buy. Greece could then start the long process of digging itself out of the rubble and fixing its economic edifice. The stock market would roar ahead as it became clear that the worst had passed. And brave investors who got in near the bottom would most likely make many hundreds of percent profit over the next few years.

Don’t believe me? Well let’s take another quick look at Argentina, that hotbed of crises. By the late 1990s it had an overvalued currency, pegged to the US dollar – similar to the situation that Greece finds itself in today with the euro. And Argentina also had unsustainable debts that it had no hope of paying back – again just like Greece today.

The inevitable result was a debt default and chaotic devaluation of the currency. Between January and June 2002 the Argentine peso fell from one US dollar to just 26 cents, a drop of 74%.

For its part, the stock market fell 84% between February 2000 and June 2002, measured in US dollar terms. On the ground there was political chaos, a sharp spike in violent crime, armed mobs shooting at shuttered banks, and mass street protests.

But eventually things settled down. Argentine stocks went on to rise over 13 times over the course of the next six years (again in US dollars). Brave investors who got in early made a fortune.

So is the Greek stock market a bargain or a basket case? The time to buy Greek stocks is edging closer, but it hasn’t arrived just yet. For now the economy remains mired in depression and there’s just too much political uncertainty and devaluation risk.

Even after falling 95% since 2007 it may not be cheap. As long as Greece stays shackled to huge debts and the euro it’s difficult to see how it can escape from depression.

But if Greece does ever leave the euro, voluntarily or otherwise, then a true bargain is likely to be presented. In the meantime, just a little more patience is required.