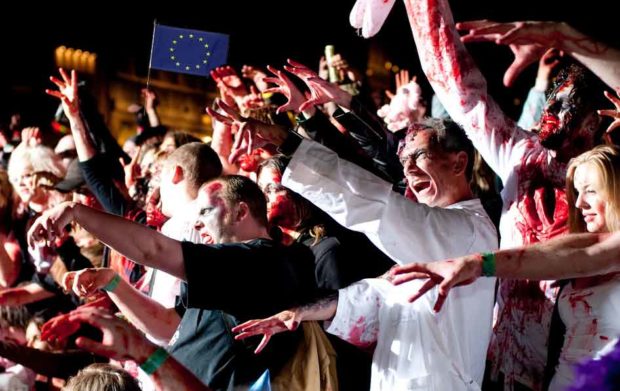 The global financial crisis (GFC) got rolling in 2007, and the financial sky had caved in by late 2008. You’d be forgiven for thinking that, a decade later, the world’s banks would have sorted themselves out by now. But banks in many European countries still have huge amounts of dodgy debts lurking on their balance sheets. In some places, it’s clear that the financial crisis never ended.

I’ve known for some time that many European banks were slow to resolve their problems after the GFC. But I was shocked by a recent report that a reader shared with me.

The report has the title “Non-performing loans in the banking union”. It’s a briefing to the European Parliament, produced by something called the “Economic Governance Support Unit”.

It’s dated 15th March 2017, but this must be an administrative error. How do I know this? Because the report is full of loads of data from the end of September 2017, along with references to meetings held in the second half of 2017 and early 2018. My assumption is that the report is really from 15th March 2018.

But enough of background…let’s cut to the chase. This map shows the percentage of bank loans in European countries that were considered “non-performing” at the end of September 2017. Non-performing is a short step away from being in default. 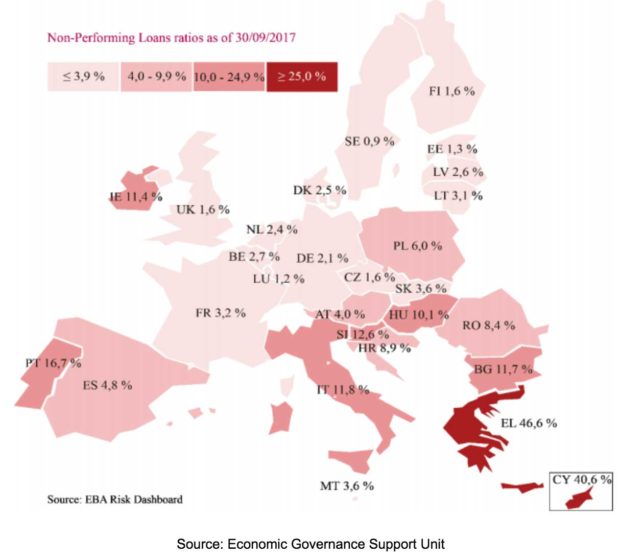 Many countries don’t have a big problem, with similar levels of non-performing loans (NPLs) as the US or Japan, where the rate is running around 1.5%.

In general, the countries without a big problem are found in the north of the continent. As a rule of thumb, if NPLs are in low single digits then there’s little to worry about.

Those are bad enough. However, the truly staggering numbers are reserved for Greece and Cyprus, with NPL ratios of 46.6% and 40.6% respectively. That kind of level is simply horrendous. 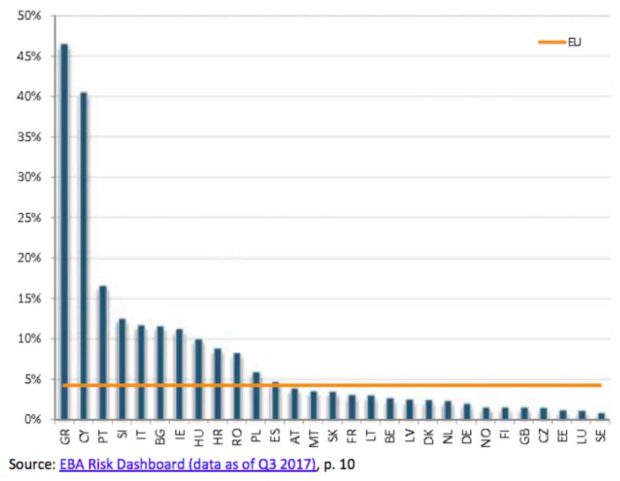 Let’s take a quick step back, and make sure it’s clear what a non-performing loan (NPL) actually is. Here’s a definition from the Financial Times:

“A loan on which the borrower is not making interest payments or repaying any principal. At what point the loan is classified as non-performing by the bank, and when it becomes bad debt, depends on local regulations. Banks normally set aside money to cover potential losses on loans (loan loss provisions) and write off bad debt in their profit and loss account. In some countries, banks that have accumulated too many NPLs are able to sell them on – at a discount – to specially established asset management companies (AMCs), which attempt to recover at least some of the money owed.”

Translation: NPLs are loans where the borrower is having trouble paying interest, or repaying the loan. It’s not yet a defaulted loan, but it’s getting close. In most countries, loans get tipped into the NPL bucket when payments are more than 90 days overdue.

In many countries, such as the US or Japan, banks can offload their bad loans to specialists, selling them at a discount to face value. The specialists then seek to recover as much as they can, aiming to eventually collect more than they paid for the legal title to the loans.

When I worked in the banking world, big investment banks had such specialist departments (I suppose some of them still do). When I was posted to Asia by UBS, in the early 2000s, I spent a lot of time talking to the head of the bank’s NPL team in Japan (a New Yorker), who was keen to expand his business. Also, there are independent asset managers dedicated to this activity, which are sometimes state-owned (as has been the case in China in the past).

But for some reason, this activity either isn’t allowed or isn’t prevalent in much the European Union. This is a major policy failure. It encourages struggling banks to “extend and pretend”, perpetually rolling over the dodgy debts of zombie companies and households.

Thus, many of the continent’s banks remain hamstrung with these legacy debts. NPLs, because they’re riskier, require extra capital underpinning compared with performing loans. And banks with a lot of NPLs have higher funding costs, since it’s riskier to lend to them.

Along with much stricter capital requirements than before the GFC, this means banks are held back in the creation of new credit. That’s bad for economic growth, since the money supply can’t expand much (see here and here for explanations of how money is created by banks).

According to the same report, the European Council agreed an action plan to deal with the NPL problem in July 2017. That includes creating a market to trade NPLs by summer 2018 (only one more year after the decision…). Presumably, this means it will become easier for European banks to sell their bad loans to the specialists.

Finally, it looks like the European bureaucrats and regulators are moving in the right direction. But what on Earth took them so long? The GFC was a decade ago!

In any case, a secondary market for NPLs will take time to develop. It requires building teams of specialists, and vast, proprietary databases of what works where (without which there’s no price discovery).

Even once the market develops, the NPL specialists won’t buy everything that’s on the chopping block. They’ll only take on loans where they think they can make a profit in the work out.

This means that, for the time being, the banking systems of many European countries remain broken. As long as that’s the case, there will be a big drag on economic growth.

Is there any good news? A little.

Most of the NPLs are concentrated in smaller banks. The biggest banks in the region appear to be in much better shape – including what’s known as “G-SIBs” in banking jargon, or Global Systemically Important Banks.

At least that reduces the likelihood of another system-wide banking meltdown in Europe. But it doesn’t solve the country-specific problems, in those countries with huge amounts of NPLs.

Anyone investing in stocks in Greece, Cyprus, Portugal, Italy or the rest of the high NPL countries had better bear this in mind. That’s especially true if they’re tempted by the stocks of smaller banks in those countries. You should stay away from those. There are better opportunities.