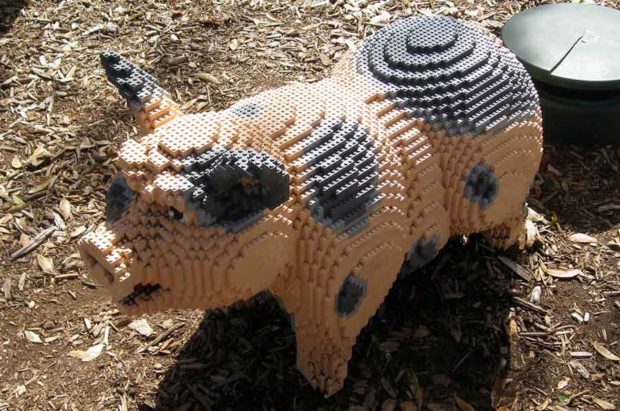 It’s a fundamental truth of investing that – all other things being equal – investors in stocks make more profit if they buy them when they’re cheap. It follows that buying already expensive stocks reduces the likely future returns. Today I attempt to identify the most expensive country stock market in the world.

Last week, in “The world’s cheapest stock market”, I got right back to the basics of why cheaper stocks deliver higher returns. Unfortunately, too many investors seem to have lost sight of some simple truths. So it pays to remind ourselves of them from time to time.

Aside from the theory, I identified Russia as the world’s cheapest stock market at the current time (or at least the cheapest one that’s easy to invest in). I also highlighted the somewhat surprising fact that Russian stocks have outperformed US stocks over the long run, measured in US dollars and including dividends.

Given that US stocks currently look expensive (for example, see here and here), and that Russian stocks look very cheap, there’s a high chance that Russia will continue to outperform in future. That’s over the next (say) 5, 10 or 20 years (I’m not making a short term prediction).

Writing about why cheapness matters got me thinking about the flip side of the equation. If Russia is the cheapest market in the world, which is the most expensive?

Why use so many measures? Because each has its advantages and disadvantages. Some of those are fundamental issues. Others depend on when the measure is used. By looking at all of them at once the biases and imperfections are more likely to be neutralised.

Note that the first five increase in size as a stock becomes more expensive. But the last one, dividend yield, decreases as things become more pricey. (The first five use price as the numerator, whereas dividend yield uses it as the denominator.)

Before looking at the most expensive markets, let’s look at the cheapest by each measure. These are the ones that rank 39th out of 39 in the scale from expensive (1st) to cheap (39th). Here’s a summary: 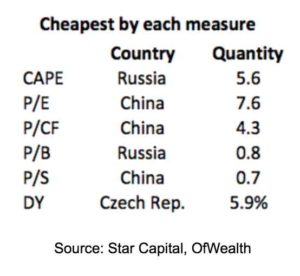 Russia is cheapest on two measures, China on three and the Czech Republic on one. So why isn’t China the cheapest market in the world? It turns out it ranks 17th most expensive for CAPE (at 17.3) – which is middling – and 30th for dividend yield (3.9%), which is cheap but not nearly the cheapest. That drags down its overall position across all measures.

On the other hand, Russia is cheapest or close to cheapest on all measures. It has an average (arithmetic mean) rank of 38.2 and median rank of 38 (remember, a low rank is expensive, a high rank is cheap). Put another way, it’s consistently cheap across all measures, as shown in this table: 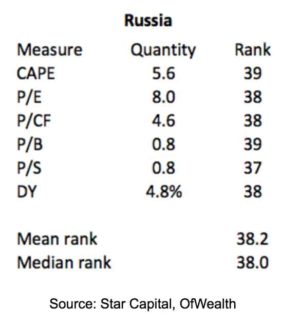 Now let’s turn to which stock markets are the most expensive.

At the other end of the scale…the priciest countries

Here’s a summary of those countries that rank in (most expensive) first place under each of the six valuation ratios: 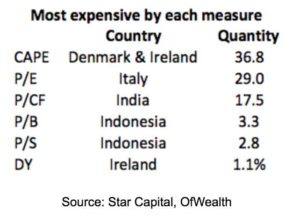 For some reason, there’s a preponderance of countries that begin with the letter “I”. Maybe the age of the pricey iPhone has infected the world of investment, giving us pricey “iStocks”. But Denmark is the only country to heroically defy this state of affairs.

Denmark is first equal with Ireland by the CAPE measure. In turn, Ireland appears twice, Indonesia twice, and India and Ireland each appear once. I’ll come back to Denmark, but here’s a summary of where things stand for the “iStocks”:

It turns out that you get a very different view of each of these countries depending on which measure is used. This underlines the importance of using multiple measures before reaching conclusions. (A deep dive would include even more measures, if possible.)

In particular, Italy is only expensive on one measure, the P/E. For everything else it’s actually one of the cheaper countries. (That said, Italy has some major structural problems which may justify this situation.)

The other three get a mixed bag of results. Of those, India is the most consistently expensive, with an average (mean) rank of 6.3 and median of 6.0.

(Incidentally, in “Why Indian stocks are fully priced” I recently took a closer look at that market, and also at the important issue of currency effects on returns.)

What about that other country that ranked first in at least one measure? That was Denmark, which came first equal with Ireland for the CAPE ratio. Here’s how it looks under all six valuation measures: 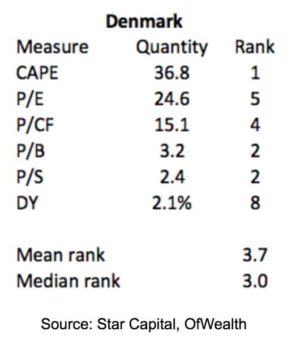 Now we’re really getting somewhere. Denmark is one of the most expensive countries under all measures. On average it’s ranked 3.7, and the median position is 3.

It turns out that no other country is so consistently present at the pricey end of the ratios. This makes Denmark the most expensive stock market in the world – at least amongst this group of 39 countries and using these six measures.

That’s because stock buybacks are a far more important way to distribute cash to investors in the US than in any other market. But unpicking the implications of this, and of the extra dilution due to new stock issued to management and employees, is too complex to cover today. Suffice to say that the US has an expensive stock market, and returns over the next decade are likely (but not guaranteed) to be poor.

Back to little old Denmark, with its population of 5.7 million, and still with its own currency, the Danish krone. (And don’t forget the delicious bacon…or the lego.) Why is its stock market so apparently expensive?

I don’t claim to have done a deep dive on this one (please let me know if you have additional insight). This is just a high level look at how major markets stack up relative to each other.

But here’s an initial thought about the likely culprit for Denmark’s situation. The main alternative asset class for Danish investors is wildly overpriced.

Of course, I’m talking about Danish bonds. Ten year government bonds yield just 0.5%. That’s in a country where consumer price inflation was 1.5% over the past year. Which is to say, real (inflation-adjusted) bond yields are deeply negative.

Low inflation and deeply negative real yields make for perfect conditions for racy stock prices. Can the situation continue? Perhaps. But I wouldn’t bet on it.

In particular, investors should be concerned about the CAPE and P/S ratios. Historically, these two ratios have had a high inverse correlation to future returns (see here and here). The higher they went in the past, the lower that future returns tended to be.

Does Denmark have the most expensive stock market in the world? Based on this evidence it’s certainly a contender. But, as I said, I haven’t done a deep dive on Danish stocks. There could be other factors that mean the Danish stock market is not overpriced, although it’s pretty clear to me that it’s by no means cheap.

Modest future returns, at best, are likely to be the result of investments in Danish stocks. There are better hunting grounds elsewhere.