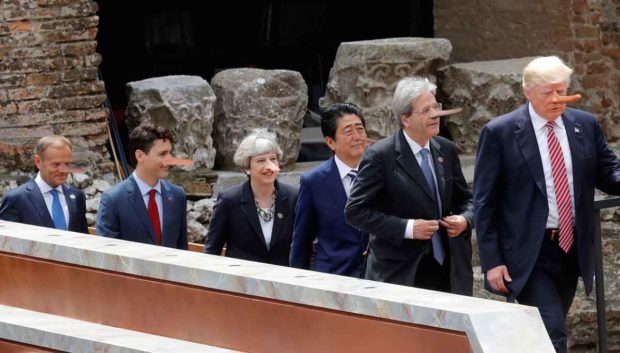 Structural factors make low economic growth a virtual certainty in the US and most other developed countries. But that doesn’t stop governments from trying to fake GDP growth. There’s no way out of the quagmire, so governments will continue to borrow and spend…until the end.

Unless you’ve been living in a cave, it should be no surprise to you that the world’s centres of economic wealth and power are rapidly shifting. Old powers are finding themselves squeezed off the world stage, as new powers make their grand entrances.

In the case of the US, its share of the global economy peaked some time around 1950. That was due both to US economic strength, but also the devastation left in Europe and Asia after the second world war.

On the other hand, by my reckoning, US geopolitical power reached its zenith much later, in the early 1990s. That was right after the Soviet Union fell apart…when Russia was an economic basket case…before the EU started its big expansion…just as Japan’s economic bubble started to implode…and when China still had a relatively small economy.

Japan boomed in the 1980s, creating a huge asset bubble in real estate and stocks. It’s been sliding ever since. European economies are sliding too, in relative terms, and in some cases in absolute size as well. China’s economic growth has been massive. India, the other giant emerging market, is only just getting started. 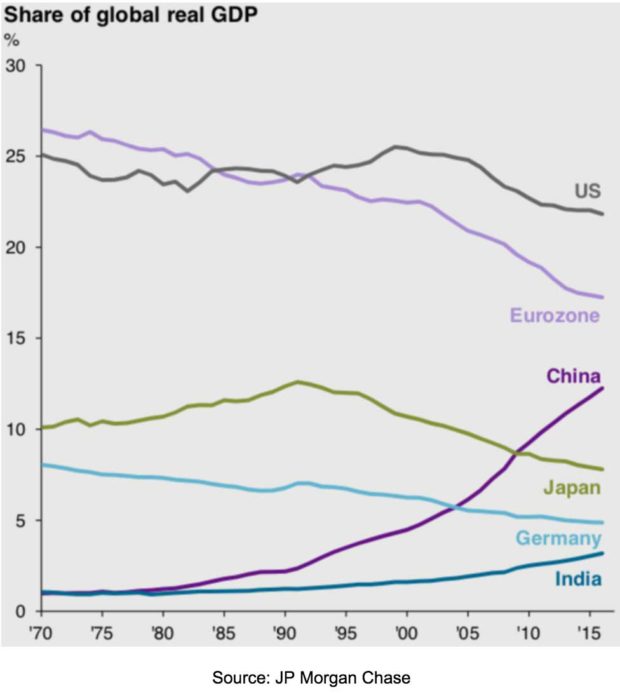 These general trends are unlikely to change, barring revolutions or major wars. In particular, developed countries are wallowing in debt and have fast-deteriorating demographics. Put simply, populations are growing ever more slowly and ageing fast.

This means steadily increasing demands on public healthcare and pension budgets, since older people clearly require more of both. For example, here’s a chart of average per-capita US healthcare spending each year, by age bracket: 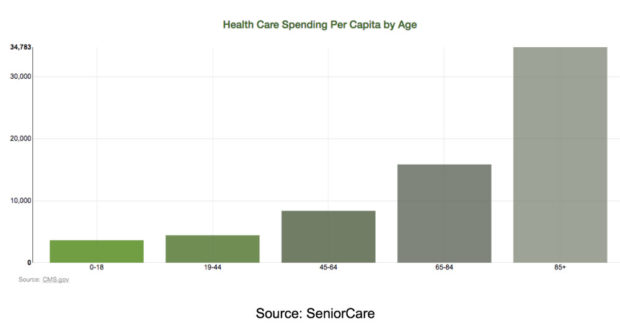 This is a big problem, since the ratio of workers to retirees is collapsing. That means fewer and fewer tax-paying earners to support greater and greater public spending demands.

In the US, in the year 2000, there were 5.2 people of working age for every person aged over 65 years. By 2030, which is just 12 years away, that ratio will have fallen to 3. That’s 42% fewer wage earners per senior, in less than a generation, and it will keep getting worse from there.

It’s a similar but more severe picture in Europe. Across the 28 countries in the European Union, the same ratio was 4 in 2008. It’s set to fall to just 2 by 2050, according to the EU’s own estimates. I don’t have figures for Japan, but I suspect it’s even more drastic, judging by this next chart. 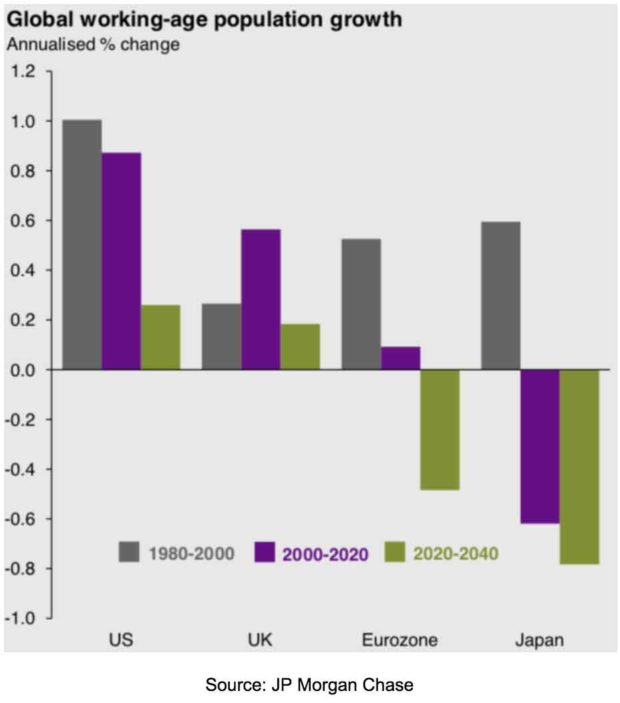 That creates a clear problem for government budgets. There will be more demands on healthcare and pensions, and fewer people to pay for it. What’s more, given that politicians are always vote-seekers, cutting health services and pension benefits won’t wash with the expanding “grey vote”.

Governments only have a few options open to them:

The problem with either cuts government spending or increased taxes is that they reduce economic growth. Spending cuts have an instant effect that reduces GDP. Higher taxes just mean more money is seized from the private sector and thrown into the huge meat grinder of government waste.

Not to mention that many wealthy people simply leave high-tax countries, taking their huge tax payments with them. Or that high taxes make companies uncompetitive in international export markets, leading to job losses. (Whereas in domestic markets, the taxes just get passed on to unsuspecting customers via higher prices.)

No politician – of any stripe – wants weak or falling GDP. It’s bad for the opinion polls. So they distract voters with mostly-irrelevant wedge issues or foreign intrigues, and the real challenges are left largely unresolved.

In fact, if anything, politicians are incentivised to accelerate public spending and fill the gap with borrowing. One of the big, stable drivers of economic growth is population growth, particularly the growth of the working population (who, aside from healthcare, tend to spend more – given both greater means and needs).

This next chart looks at real (above-inflation) US GDP growth for the six decades between 1958 and 2017 inclusive. What’s more, it breaks it out between the growth rate in the number of workers (in purple) and what it claims is “growth in real output per worker” (in grey). The latter is a dodgy measure, as I’ll explain below. 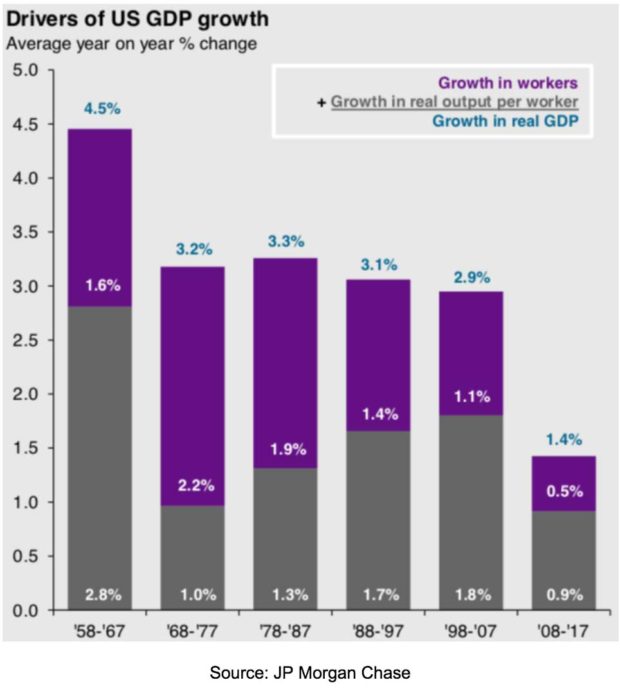 The overall trend is down, and was particularly weak over the past decade. US worker growth fell to just 0.5% a year, and that’s set to fall even further to just 0.2% a year in the 2020-2040 period (see previous chart).

The balance is made of output growth per worker. The temptation is to think of this as productivity growth, which is certainly a factor. But, since government spending is an important part of GDP, the growth of how much is doled out by Washington also affects this piece. (Raising government spending can hardly be equated with increased “productivity”, or even “output”.)

Put simply, if governments jack up spending then GDP growth rises. The extra spending can be – and usually is – covered with extra public borrowing. Governments rely on the kindness of strangers – often foreign bond buyers – to keep the punters happy at home.

The current US government says it wants real GDP growth of 3% a year. That sounds pretty good in the context of the last decade, which averaged just 1.4% a year. It would get the US back to the levels seen in the four decades up to 2007, which averaged 3.1% a year. Currently, it’s running at about a 2.3% annual clip.

Those grey boxes – the deficit spending / productivity mishmash – averaged 1.4% a year across those four decades from 1968 to 2007. The growth in number of workers averaged 1.7%, but has fallen over time. In future, the latter is set to be less than 0.5% a year, and reducing further over time.

So let’s say that worker growth is currently running at about 0.4% a year. That means the balance is 1.9%, which is higher than in any of the previous five decades (grey bars). To get to a 3% overall real GDP growth rate, that grey part would have to reach 2.6% a year, close to the level of 1958 to 1967.

That sounds totally unrealistic to me, except in very short bursts. But it’s not too hard to see how the US government is currently faking it, by which I mean giving the growth a boost with expanded government spending (and increased borrowing).

Et voila! Of the current GDP growth rate of 2.3%, about 1% is simply because it’s been goosed-up by increased government spending. In the meantime, the budget deficit, which was $666 billion last year, is well on track to exceed $1 trillion within a couple of years ($833 billion is expected this year).

That’s a product of both the increased spending and the recent tax cuts. It’s a shame the US government couldn’t have just stuck with the latter…and actually tried to cut spending in the meantime. But I guess they wanted instant results in the GDP stats.

Of course, the US isn’t alone in playing this game. Many European teams are on the field as well. Most recently, the soon-to-be-formalised Italian coalition government has made it clear it wants to increase the budget deficit, in defiance of EU rules. It won’t be the last.

In all of these countries, the debts will keep piling up. That’s as the politicians dodge the structural realities…while trying to keep voters happy enough to stay in power (or gain it). Borrow and spend, until the end.

That end will come one day, as sure as eggs are eggs. Unless we see dramatic changes to policies – which is unlikely – you should expect more frequent and larger financial crises in developed countries as time goes on. They’ve become the “submerging markets”. The historical, Latin American-style management of public finances is going global.

Which is why I continue to recommend a substantial holding of physical gold, in bullion or coin form (see here). Gold will always endure, whatever the politicians or central bankers get up to.

Mind you, they may still try to confiscate it or impose wealth taxes on it. It’s not like they haven’t got “form”. But you can always emigrate if they try…