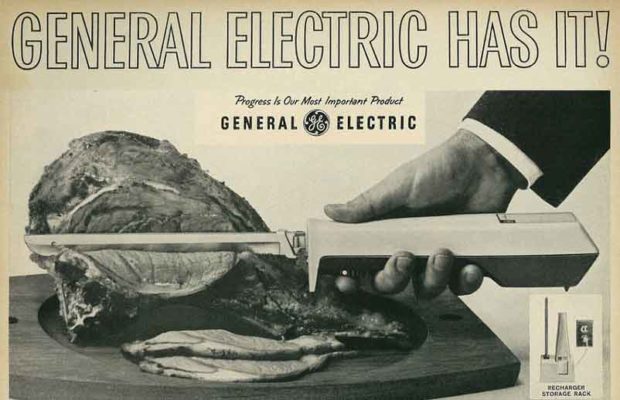 General Electric Company (NYSE:GE), the huge American industrial conglomerate, is having a hard time. The stock is down 37% this year. That’s quite an achievement in a bubbly market that’s up 15%. But that doesn’t make GE a bargain, and it could fall much further. New management will announce their plans on Monday 13th November. The right move would be to cease stock buybacks and slash the dividend, along with setting out a clear strategy for the future.

Founded way back in 1892, GE is a giant company with a market capitalisation of US$173 billion. That’s even after its share price is down so hard this year, to $19.92 at the time of writing.

At the height of a previous market bubble, and earlier management hubris (under media darling Jack Welch), in the year 2000, the stock traded close to $60. Since then, and under the management of Jeffrey Immelt since 2001, it’s been a sad story for hopeful investors. Immelt left on 2nd October, and it’s now up to the new guy, John Flannery, to try to turn things around.

Over the past year the company paid out dividends per share (DPS) of 96 cents. That means the current dividend yield is 4.8%. A lot of investors own the stock for this attractive yield, plus the prospect of stock buybacks – although the latter are more variable.

(Stock buybacks reduce the number of shares in issue, meaning the profits and net assets of the company are divided among fewer remaining shares. This means, as a way to distribute cash, buybacks result in a higher share price than if the same cash was paid as dividends. See “America Inc. breaks the golden rule” for more on when buybacks do or do not make financial sense. In the case of GE, they don’t…)

Earnings-per-share (EPS) was 89 cents in 2016, which means the trailing price-to-earnings (P/E) ratio is 22.4. Guessing GE’s “normal” EPS is a tricky business. It was $2.17 in 2007, but as low as (minus) $-0.62 in 2015. This is a business lurching from crisis to restructuring, and as such the risks are higher than usual. Working out the steady state earnings potential is a minefield.

Over the past two decades or so, GE has spent far too much time on financial engineering, and far too little time on actual engineering. A change of emphasis is long overdue.

Apart from the industrial side, the other business is GE Capital, the financial division. This used to be huge, but has progressively been sold off and reduced.

If management does the right thing on Monday it will take steps to cut the dividend and discontinue stock buybacks, at least for the time being. This will allow the company to conserve cash for reinvestment in the business, and (hopefully) improve the future growth rate.

What’s the stock probably worth?

I don’t have a crystal ball, but let’s say the new CEO cuts the dividend to 44 cents a year, which would be down just over half. And let’s say he comes up with a coherent plan to get the business growing at, say, 5% a year.

That’s not spectacular, but it’s far better than recent years and reasonable for such a huge and mature company. Expecting much more than that is wishful thinking.

Given all the uncertainty and the complexity of the business, it’s reasonable for investors to demand a return of, say, 9% a year from this stock (also known as the cost of equity).

That’s not least because the corporate disclosures are pretty bad. I’ve looked at hundreds of corporate investor relations websites in the past, and countless company reports. GE’s information isn’t the worst I’ve seen. But it’s certainly amongst the worst for a large, complex, supposedly blue-chip company. This company’s corporate communicators don’t do themselves, or their shareholders, any favours.

If growth of 5% a year is achievable, and total required return is 9% a year, then 4% profit must come from somewhere else. At fair value the stock’s P/E would be constant, and so there would be no capital gains or losses from a changing multiple.

The dividend yield is left to make up the rest. That way, investors would get 5% a year capital gains, from the business growth showing up in EPS, and 4% a year from the dividends.

For illustration purposes, if DPS is actually cut to 44 cents, then for the dividend yield to be 4% this implies a stock price of $11. That’s another 45% below today’s price of $19.92.

On the other hand, if Flannery doesn’t cut the payout this much, it’s fair to assume the growth rate will stay low, due to ongoing lack of cash to reinvest in growth. The fair value price of the stock will still be substantially below today’s level.

Alternatively, there may be enough investors out there who will accept a return well below 9% a year. At 7% cost of equity, once 5% growth is deducted, only 2% dividend yield would be needed.

That implies a fair value price of $22, assuming the future dividend is 44 cents. But, personally, I wouldn’t be remotely interested in owning stock of this troubled and intransparent company for the prospect of a 7% annual return.

So you might think a price of somewhere around today’s level of $20 is okay – with or without a dividend cut – and that’s fine. But it won’t float my boat at that level. I’ll leave it to others.

Barring some kind of miracle, GE stock deserves to fall a lot further. This is a great example of when a collapsing stock price does not (yet) signal a bargain.

Personally, given all the complexity and uncertainty, at the present time I wouldn’t get interested in buying until it’s trading in single digits (ie below $10). At least that would offer the prospect of some decent price upside.

In the meantime, unless the price falls sharply from here, I recommend you steer well clear of GE stock until the dust has settled.

(Disclosure: I have no position, long or short, in GE stock.)