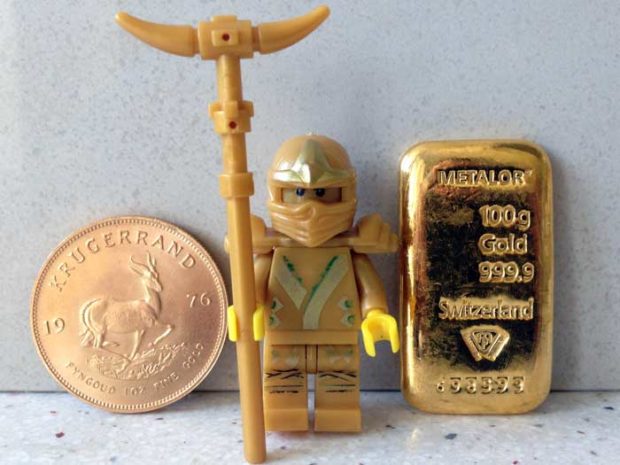 Most developed economies have such weak fundamentals that they are trying ever more desperate policies to get things going again. Japan’s latest efforts have been built around one central policy: currency devaluation. More recently the euro has re-joined the race to the bottom and it’s only a matter of time before other currencies follow suit. Gold provides an effective shield against the blows raining down on savers and investors in the ongoing currency wars. Here’s more on why, and how to go about it.

Despite a quarter of a century of economic funk, Japan is still the world’s third largest economy. It’s also the fourth largest exporting nation, as shown in the following chart of the top 10 exporters.

China, as with so many things these days, takes a commanding lead well ahead of the pack. Its 2014 exports were a massive US$2.3 trillion. Unsurprisingly the USA is next at US$1.6 trillion, although 30% behind China. The USA is closely followed by Germany.

I’d always known that Germany was an export powerhouse, but until I saw these figures I hadn’t realised fully how much it punches above its weight. After all the population of China is 1.4 billion compared with 323 million in the USA, and “just” 83 million in Germany.

After these top three there’s a big drop to Japan, with US$0.7 trillion (or US$700 billion) of exports, and then things level out. Japan is followed by Asian neighbour South Korea and a handful of European countries, plus Russia. Including Germany, four of the top ten exporters use the euro as their currency, shown in blue on the chart. The UK is part of the EU but the British still use pounds to buy cups of tea and pints of beer.

Japan’s policy to devalue its currency the yen makes its domestic manufacturers more competitive in global markets. That’s because locally derived production costs, such as labour wages or building rents, are reduced relative to the currencies of the foreign purchasers that buy the exported goods. This is one of the main reasons why Japan is going down this route.

This in turn makes it harder for manufacturers from other countries to compete with Japanese goods, where there is market overlap. So, for example, over the past couple of years the cost of producing a car in Japan has fallen relative to a car produced in South Korea. This makes it easier for Japanese producers to chase market share by cutting prices in foreign showrooms.

So how big has the currency shift been? The following chart shows the Japanese yen (currency code JPY) over the past five years against a selection of the currencies of the largest exporting nations. The orange line is against the US dollar (USD), green for South Korean won (KRW), dark blue for euro (EUR), light blue for Chinese renminbi yuan (CNY) and red for British pound (GBP). 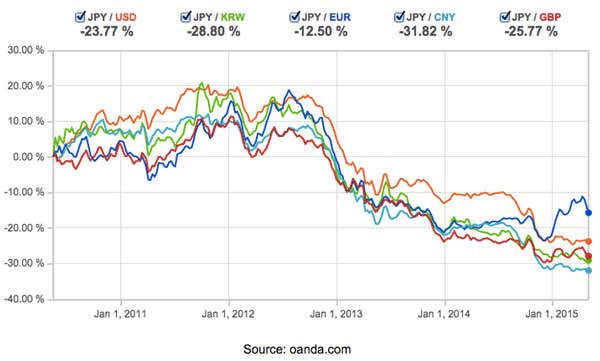 You can see from this that the yen devaluation against most currencies started in early 2012 but really accelerated at the end of that year and in early 2013.

Since the start of 2012 the yen is down 40% against the South Korean won, down 36% against both the US dollar and the Chinese renminbi yuan, down 33% against the British pound and down 25% against the euro.

Those are all very major moves. For now Japan is winning the race to the bottom in the currency wars.

By the way this makes Japan a really cheap holiday destination relative to other developed countries. A quick look at the prices to stay at the luxury Four Seasons hotels in different global cities shows me that two adults can stay in Tokyo for US$710 a night. That’s almost half the US$1,334 rate to stay at the Fours Seasons in Paris, France. Tokyo used to be eye wateringly expensive to visit, but that has all changed. If you have the time and the means I highly recommend it. Japan is a fascinating country.

Given such a huge devaluation of the yen, and the competitive advantage it gives to Japanese companies, it’s only a matter of time before other countries react. Especially given the general weakness of the global economy.

In fact the euro has already weakened recently. In December 2014 the yen was down 33% against the euro since the start of 2012, but is now down only 25%. This follows the European Central Bank’s decision to follow the Japanese (and American, and British) central bank playbook of launching a blitz of money printing. Although these days it’s known as “quantitative easing” (QE).

The idea of this monetary splurge is to stimulate the economy. The actual result tends to be a bubble in stock and bond prices and little real stimulus. Some even claim that QE has a negative effect on growth. But either way, this is Europe’s latest foray into the currency wars.

If the euro keeps devaluing in this competitive race to the bottom then it’s only a matter of time before others follow suit to preserve their competitiveness. After all, the eurozone is a huge trading area. Exports from the EU as a whole, which mostly come from countries using the euro, are comparable in size to those of China.

(I note that for the price of a room at the Paris Four Seasons to match that of the Tokyo equivalent the euro would have to lose another 47% against the yen. And if it’s gourmet food that you’re after, Tokyo overtook Paris for Michelin starred restaurants in 2010, and now far suspasses it.)

The central banks that manage the US dollar, won, renminbi yuan and pound could soon be back in the game to race to the bottom. And if all move those currencies head down, given the huge percentage of the world economy that their issuing countries represent, it’s a fair bet that many other countries will devalue their currencies as well.

Of course currencies are priced relative to one another, so they can’t all lose value against each other at once. But they can go down in relation to real things. Put another way, prices of goods and many assets would go up as currencies are deliberately driven into the ground. Currency devaluation is price inflationary.

It’s impossible to know when this might happen or how big the moves will be. But there is something you can easily do to protect yourself from it happening, and even benefit in the process. This is especially important if you have large cash deposits as a percentage of your portfolio.

Get yourself a gold shield

Put simply, you should make sure you own a decent amount of physical gold. This provides a hedge against your cash and bank deposits being devalued, whatever currency they are held in. Gold is your protective shield against weak currencies in a highly indebted world.

Gold is also likely to be an outright good investment in the long run, not just protection against currency devaluation (see here for our past articles on gold).

You can clearly see this in the chart below, which compares the price of gold (currency code XAU) to the US dollar (USD, in orange), euro (EUR, in green) and yen (JPY, in blue) over the past five years.

That’s equivalent to 5.4% compound return over five years for Japanese investors. That’s a big deal in an environment where both inflation and interest rates are ultra low. It’s certainly been a much better performer than yen cash. 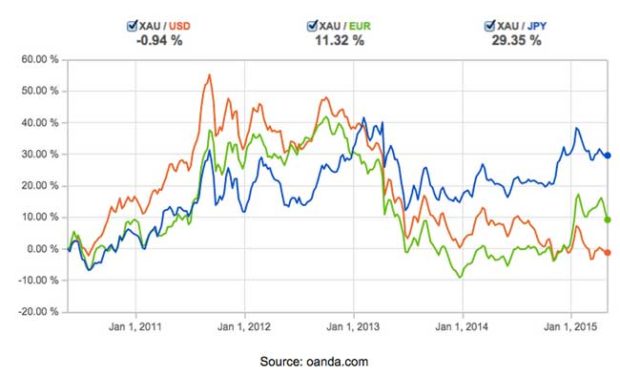 You can also see how the gold price is up 10% over five years in euros. Obviously that’s a less impressive gain than when measured in yen. But it’s still an outperformance against cash deposits.

But the euro has most likely only just got started on its latest leg down. And many other currencies could soon follow suit. I recommend you own physical gold – coins or bullion – worth 10% to 20% of your cash deposits, and possibly more.

If you’re buying bullion coins, like krugerrands or eagles, then find a reputable local dealer. For larger amounts invested in gold bullion I recommend London-based BullionVault, which will allow you to store gold in vaults in safe places like Zurich, Switzerland or Singapore for a low cost.

Governments and their central banks are attacking your savings in the currency wars. You need to get yourself a gold shield for protection.