The “golden constant” is the idea that gold holds its purchasing power across centuries, with fluctuations along the way. But the gold price has substantially beaten inflation over the past 45 years. That’s since the US dollar was cut loose from the gold standard in 1971. Does this mean gold is overpriced? Or are we simply in a “new” normal where gold keeps on performing?

Roy Jastram came up with the idea of the “golden constant” in his 1977 book of that name. It took an in-depth look at data in England since 1560 and the USA since 1800.

Jastram’s main conclusion was that gold could fluctuate substantially in terms of purchasing power. But viewed across centuries it preserved its value.

During that time, gold was used as money. But those days are long gone.

Gold is no longer money. Money is no longer on the gold standard – pegged to and exchangeable for gold. And despite what the high priests of gold – the “gold bugs” – may wish, gold is not going to become money again any time soon.

Nowadays gold is a high quality commodity that goes into consumer goods. It can be fashioned into desirable things known as jewellery (with lesser applications in electronic goods…and rap stars’ dental accoutrements). This is why I call gold “the ultimate consumer good”.

So why do people invest in gold? And why do central banks own so much of it?

Essentially they’re stockpiling something that’s easy to keep, never decays, and never goes out of fashion.

Nearly US$300 billion of undecaying value crammed into something the size of a three bedroom apartment. That’s why gold is a convenient way to store wealth.

Now let’s switch to the gold price. I’ve put together figures for how the real (inflation-adjusted) US dollar price of gold has moved since 1791. The following chart shows the result, indexed to start at 100 in 1791. 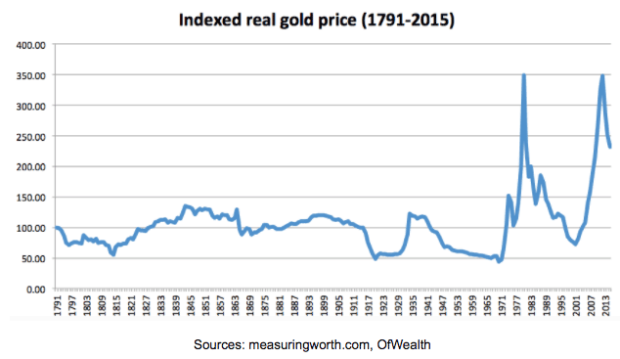 You can tell when gold was money, or when money was pegged to gold – which is to say the 1791 to 1971 period – the real gold price fluctuated in a range.

Actually it was a fairly big range (44 to 135 on this scale). But in the ultra long run gold pretty much kept to this idea of the golden constant, preserving its purchasing power in terms of “things”.

But that was then and this is now. Since the dollar was let off the gold leash the dollar gold price has rocketed – which is the same as saying the dollar has lost masses of value in gold terms.

Then it took off again, peaking in 2011/2012. By the end of 2015 the index reached 232. Put another way, if gold is supposed to match price inflation over time, and if modern CPI is accurately measured, gold is overpriced today by a factor of 2.3.

But what if CPI isn’t an accurate reflection of rises in the cost of living? Given that government statisticians claim that, for example, car prices don’t rise there’s plenty of scope for scepticism. Personally I believe that CPI is understated to the tune of 1-2% a year. (For a full explanation see “Lies, damned lies and CPI.”)

That’s enough to explain most of the discrepancy and give comfort about the current gold price being close to “fair value”. Add 1.5% a year to CPI for the past 45 years, since 1971, and actual (compound) inflation would be almost twice as much as the government figures. (People have covered the difference with credit.)

But I think there’s something else going on. This is to do with the billions of people that have recently been unleashed on the gold market, most especially in China, but with India and other emerging markets bringing up the rear.

These hoards of people are getting rapidly wealthier, most of them like gold, and they’re buying more of it. I recently wrote about this in “The 13 big things driving gold.” But since then I’ve been doing more digging and thinking.

Let’s look at how much gold each person would get if all the gold ever mined was shared equally across everyone in the world, and how that’s changed over time. I got historical gold stock figures from World Gold Charts, and population stats are easily available.

It then fell to 0.67 ounces during the ‘80s and ‘90s, meaning physical supply became tighter in people terms. Since the ‘90s it has risen again, reaching around 0.77 ounces per person today – above the 1950 level.

In other words, American and Chinese citizens were out of the gold market for many decades. Not to mention that almost all Chinese were dirt poor for most of the 20th century (feudalism and communism tend to do that).

The yellow line on the following chart shows unadjusted global gold ounces per capita since 1900. The red line strips out US and Chinese citizens for the periods when their governments banned gold ownership. 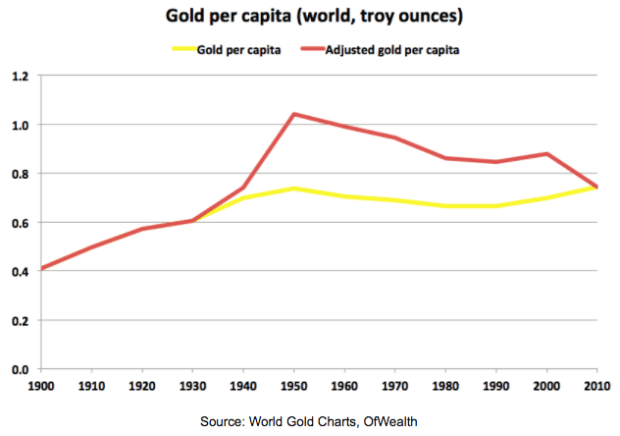 The two lines tell a completely different story. Adjusted for the Chinese and American gold embargoes the supply of gold per person initially rose sharply, but then fell from 1950 onwards. The gold supply got tighter over time as Americans and Chinese were allowed back into the market.

So where do we go from here? We’ve had a big demand shock or two. But what happens in future?

Evidence suggests that both Indians and Chinese have been buying more gold as their economies have grown. See the charts in here for more.

As Chinese wealth started to take off, naturally some of the money has found its way into the gold market. Personal experience suggest that newly wealthy Chinese love to flaunt it. Gold is one means.

The Chinese economy would increase by a factor of 3.9 over the next 20 years, measured in US dollars. Whatever the actual growth rate is, it seems incredibly likely that physical gold will remain well bid by this ever expanding wave of Chinese wealth.

The Chinese love gold. Something similar is happening in India, albeit from a lower base..and Latin America…and Africa…and even the Middle East.

Are you starting to get the picture? We’re talking about billions of wannabe Donald Trumps. 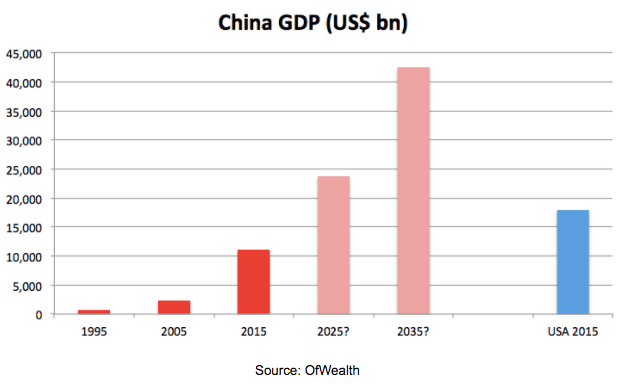 China and India alone contain 36% of the bipedal creatures known as humans that occupy this planet. And they love gold more than most of the rest. And they’re getting richer faster than almost anyone else.

(Note to investment analysts: the US is only 4% of the population and not a big force in today’s physical gold market.)

In a post-gold standard world the idea of the “golden constant” may be dead. But I reckon it’s been replaced by something more powerful.

The reasons to own gold for the long run remain very much alive and kicking. Long live gold.