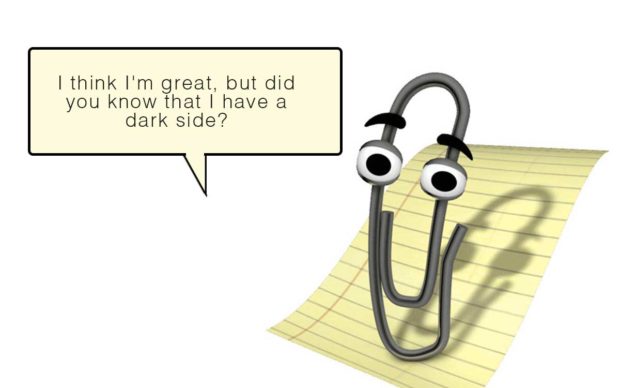 Technology is taking over. At least when it comes to which companies are the biggest beasts traded on the world’s stock markets. But just because big tech is currently riding high doesn’t mean those stocks will be good investments. A look at the only survivor among the most valued companies over the past 15 years sheds light on successful stock investing. It’s about basing it on what you know, not on what you can only guess at.

To understand this, let’s take a look at how the world’s top five companies by market capitalisation have changed in the past 15 years. Market capitalisation is the value of all of a company’s shares at the current price. It’s what marginal buyers and sellers in the stock market think a company is worth at the current time (which isn’t necessarily anywhere near the same as a company’s real value). 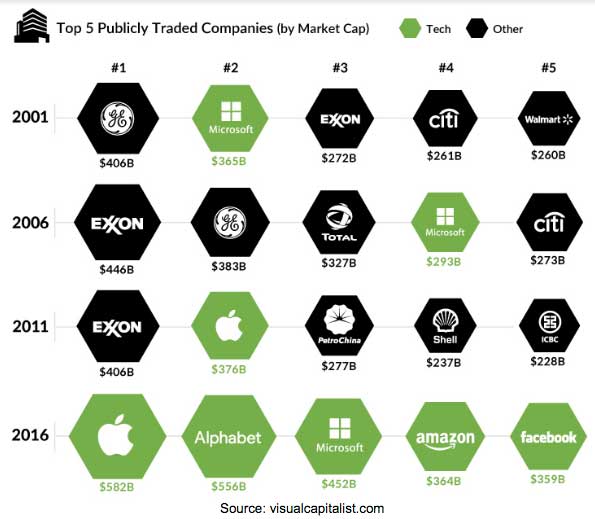 You can see right away that things have changed dramatically. Out have gone General Electric, Exxon Mobil, Citigroup and Walmart. They’ve been replaced by Apple, Alphabet (Google), Amazon and Facebook. It’s been a tech takeover.

Only one company remains from the original top 5, and that’s Microsoft Inc. (NASDAQ:MSFT) – another tech giant. Even so, it’s slipped from second to third place.

That got me thinking. How has Microsoft stayed up there all this time, and how have its investors done out of it? The business looks like it’s stayed successful. Does that mean owners of its stock have made big profits too?

Let’s start with that market capitalisation. It’s gone from US$365 billion to US$452 billion, which is an increase of about 24%. Hmm, that doesn’t sound like much over the space of 15 years. In fact it works out at just a little over 1.4% a year on average, with compounding (growth on growth).

After a little digging I worked out that Microsoft’s top line sales are up 3.4 times over the same period, which works out as average annual growth of 8.4%.

That’s pretty impressive for such a big and long-established company. After all, it’s been going since 1975. For much of the time it enjoyed quasi-monopoly status for personal computer operating systems, including laptops.

In fact it still has 89% share, although down from 97% in year 2000. But when you include more modern tablets and smartphones, for total “consumer computing” in the present day, that share is more like 20%.

While sales have kept growing, profit margins have declined: from 29% in the year to June 2001 down to 20% in the year to June 2016. That’s not such good news, and explains why net profit after tax has grown less than revenues. Profits are up 2.3 times in 15 years, which is equivalent to 5.7% a year on average (again with compounding).

Further digging reveals that the share count reduced by 28.1% over 15 years. Microsoft has reduced its number of shares using big stock buybacks, which have more than outweighed new stock issued to management and employees. That means profits are now split across fewer shares. And of course this has propped up the stock price, making those executive stock options all the more valuable to corporate managers.

That’s not exactly anything to write home about, especially since it’s such a successful company. But there’s still one thing missing – dividends. Microsoft paid its first dividend in January 2003 and since then a stockholder would have received US$12.03 of cash payments before tax.

Total profit of 109% over 15 years. That’s equivalent to a little over 5% a year, with compounding. Hmm, still doesn’t sound like much.

Also you had to wait a whole 12 years, until mid-2013, for any kind of meaningful increase in the stock price. Microsoft traded sideways until then, before joining the upwards trajectory of the rest of the US stock market.

How can it be? How can the returns be so low in this growing company, which generates huge amounts of cash and which enjoys a virtual monopoly position in its core markets?

The answer, of course, is valuation. Back in 2001 the stock’s P/E ratio was 50. That was even after the stock price had already fallen 45% from its tech bubble high of nearly US$59, reached in December 2000. The P/E must have reached or been close to triple digits at its heady peak.

In fact, as the following chart shows, the stock price still hasn’t gone above that bubble high, even though the company is many times bigger. You can also see the 12 year price plateau between 2001 and 2013.

Nowadays the P/E has fallen from 50 to 27, down 46%. That’s still pretty high, following the strong run of the past three years, especially given another 15 years of business maturity since 2001. Investors today are still betting on a lot of future growth, which may or may not occur.

This fall in the P/E explains why overall investor returns have been modest since 2001. And remember, that 5% a year was before tax. And official US consumer price inflation has run at 2% a year over that time, on average (with the genuine rate probably being 1% or 2% a year higher).

Consider the investor that bought in 2001. Many would have done, given the stock price had already been cut in half from its peak. If they’d held on, maybe they cleared 1% or 2% a year, after taxes and inflation. And they had to wait a hell of a long time to achieve even that, while the stock price languished in the mid-30s dollar range for more than a decade.

It all comes down to the high market valuation and expensive stock price at time of purchase. Microsoft’s very strong business has continued to grow and perform well at the operating level. But the falling P/E offset most of the business growth. That left just cash payouts – via dividends and buybacks – to give the investor a modest return.

Without the falling P/E investors would have made 8.9% a year, by my calculations (and a little more if the dividends had been reinvested in more stock). That’s a reasonable, if not spectacular, return. The total profit would have been 257%.

But with the falling P/E dragging on the price they’ve made 5% a year. That reduction of 3.9% a year makes all the difference over such a long period. Total profit falls to 109%. In other words, without the effect of the falling P/E the long term profit would have been 2.4 times as high.

This kind of result is a huge issue if it’s repeated over a multi-decade investing span – which anyone living into their 80s or 90s is going to have. It shows just how important it is to concentrate on what you know.

…however likely it looks that they’ll keep dominating their area and growing, if we overpay for that growth then the profits from buying the stock will be poor.

We can speculate all we like on how much profit companies will make in future. But however likely it looks that they’ll keep dominating their area and growing, if we overpay for that growth then the profits from buying the stock will be poor.

Will Facebook Inc. keeping growing and making tonnes of money? Yes, probably, although we can’t be sure. But even if we can be, is it worth investing when we know the P/E is 59? Probably not.

Can Amazon Inc. continue to dominate online retailing and grow sales at a 20% annual clip? It seems likely, at least for now. But given that we know it has a P/E ratio of 190 and price to cash flow of 50 is it likely to work out well for stock investors in the medium to long term?

Again, that’s a stretch. You may even be better off buying low growth, safer and much cheaper Walmart Inc. stock (see here for more).

There are very many unknowns when investing in stocks. There are no handy crystal balls. But investors that concentrate on a range of valuation measures before buying – which is what they can know, instead of what they can only guess at – have a much, much higher chance of success.

That’s why I like value investing, and encourage you to take this approach when investing in stocks. It focuses on using known information to find stock market bargains. And it’s the bargains that are most consistently the lower risk, higher profit stocks to invest in.

Anything else is speculation.