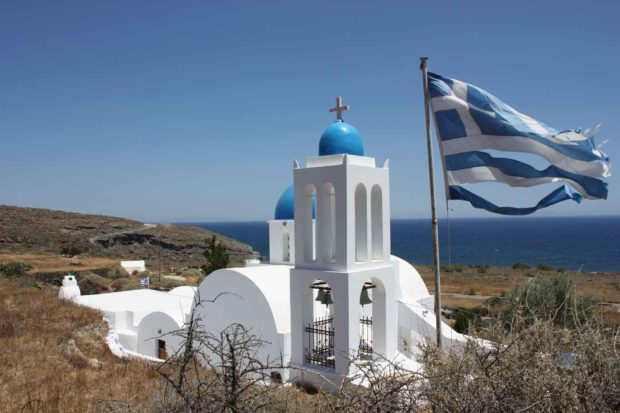 The Greek tragedy continues. Greece continues to grind through a massive depression that’s now lasted almost eight years. The economy is a quarter smaller than back in 2008. Unemployment is still sky high, and government debt is high and climbing. The stock market has imploded, down 97% since its October 2007 high. On the face of it Greek stocks look really cheap. But is it really worth investing in them?

I wrote about Greek stocks on 1st April 2015 (see: Down 95%. Is this a bargain or a basket case?). The market had completely collapsed already and a lot of pundits were recommending it as a bargain. But despite this massive collapse I concluded that investors should continue to avoid Greece.

A reader called Thomas recently wrote in asking for an update. Here’s what he had to say:

First let me start by saying that I absolutely LOVE OfWealth. I have learnt so much these past few years and I greatly appreciate all the time you put into it.

In the past you mentioned that you would keep an eye on Greece as a potential future investment. Do you think we have reached that point through e.g. the ETF GREK?

First of all, many thanks to Thomas for his kind words. He certainly knows how to improve his chances of a response! But in fact I try to respond to all messages received, directly if not in an article.

The ETF he’s referring to is the Global X MSCI Greece ETF (NYSE:GREK). It’s the only ETF solely focused on Greece that I’ve ever found, and so the only really easy way to get exposure to a Greek stock index.

When I wrote about Greece in April last year GREK had a price of US$10.91. As I write today it’s trading at US$7.36, meaning it’s down 33%. It looks like my call to steer clear of Greece was a good one.

In fact, at its low point in February this year the price went all the way down to US$5.67. That was a fall of 48% since the original article.

That’s in the range of further fall that I reckoned could still happen in April 2015. Then I said: “…this market could easily fall another 30-60% from its current level, when measured in US dollars”.

This just highlights what I pointed out before. Just because something is down a huge amount doesn’t mean it can’t fall more.

Greek stocks had fallen around 95% by April last year, meaning the market price of the index was just 5% of the peak level. Now the index is down 97% from peak, leaving just 3% behind.

Greek stocks had fallen around 95% by April last year, meaning the market price of the index was just 5% of the peak level. Now the index is down 97% from peak, leaving just 3% behind. A fall from five to three is a 40% drop in price.

After these further falls, the question now becomes whether it’s finally time to buy Greek stocks. They certainly look cheap by some measures. The issue is whether they’re cheap enough given the state of the Greek economy and government finances.

Greek GDP fell every year from 2008 to 2015, and it’s still uncertain whether it will grow this year. In total, GDP is down 27% over nearly eight years. GDP per person is down slightly less, falling 25%. This is because the population has fallen 2% as people have left the country to look for better opportunities.

And who can blame them? The unemployment rate is a staggering 23.5%, although that’s slightly less bad than the peak of nearly 28% reached in late 2013.

Young people have been suffering even more. Youth unemployment, which counts those under 25 years old without a job, is running at 50%. That’s down from nearly 60% in 2013, but is still staggeringly high.

There are probably hundreds of thousands of young Greeks in their mid 20s that left school in or since 2008 and have never had a job. They’ve had no training and experience, and their work careers will probably never recover. Apart from anything else, long term unemployment is likely to have sucked them dry of the will to work, let alone look for it.

To me it’s clear that this collapse in GDP and still sky high unemployment mean Greece is suffering a full blown and brutal depression, with little end in sight. This is a modern day Greek tragedy.

As if that wasn’t bad enough, government debt is massive as well. At 177% of GDP that puts it second only to Japan’s 230%. Japan being the very definition of a zombie economy, having been muddling through since 1990 (!!!).

To dig itself out of this hole I believe two things need to happen. First, Greece needs to default on a huge piece of its debt, or have it forgiven by lenders. Second, it needs to escape from the shackles of the euro, introduce a new Greek currency, and devalue.

…the debt is about 360 billion euros (US$403 billion) then someone would have to eat a huge loss.

When it comes to how much debt the country needs to get rid of, about half seems right. But since the debt is about 360 billion euros (US$403 billion) then someone would have to eat a huge loss.

Most of that money is owed to other European countries (via the European Union), or the European Central Bank, or the International Monetary Fund.

Imagine persuading that lot to share a US$200 billion loss, or to agree how to share it. It would mean admitting that their policies had failed, including the imposition of a common currency, the euro, on 19 countries that use it including Greece. And the political blowback of countries such as Germany and France having to write off Greek debt, effectively funding past overspending, would be huge to say the least.

A debt write down or default is essential for Greece to get back on its feet. But it still seems unlikely. By the way, if you are crazy enough to want to lend to the bankrupt Greek government, a 10 year government bond yields 7.9% in euros.

I know that may sound like quite a lot in a low or negative yield world. But clearly the risks are high. And guess who would be at the front of the queue in a default scenario? I bet it would be investors, not the supranational bodies like the IMF, EU and ECB.

Then there needs to be a new currency, such as a “New Drachma”, followed by a big devaluation, of say 50%. This would give a big boost to the economy, in particular for inbound tourism. That industry alone is 18% of the Greek economy. If sitting on a beach on a Greek island suddenly became 50% less expensive the Northern European holidaymakers would flood in.

Of course Greece’s neighbours in the Mediterranean sun aren’t going to want that to happen. Spain, Portugal and Italy also have big tourism industries, weak economies and high unemployment.

Again, the medicine that Greece desperately needs is unlikely to be available, unless it finds a government with the guts to stand up to the EU. That hasn’t happened so far – although Britain’s vote to leave the EU may help to change things.

Looking at Greek stocks, on the face of it they’re extremely cheap. The MSCI Greece index has a P/E of 8.2 and price-to-book ratio (P/B) of 0.4.

(P/B measures the relationship between market capitalisation – the value of shares at current market prices – with company net assets – also known as book value or shareholders’ equity. Net assets are everything owned (assets) less everything owed (liabilities). If P/B is below 1 then the stocks are selling for less than liquidation value.)

That looks pretty cheap. But there’s a good reason. Greek companies don’t make much money out of their assets.

Return on equity (RoE) is a key measure of profitability, and is profits divided by net assets. It measures how much is being squeezed out of company resources. In case of the Greek index the RoE is just 5%. That’s very low compared with, for example, the nearly 12% RoE of the S&P 500 index of US stocks.

There’s another issue too. If you buy the GREK ETF about a quarter of it is made up of Greek bank stocks. These banks have been taking billions of euros of losses for many years and typically trade with P/B ratios of 0.2 or 0.3. They’ve been recapitalised, but are still lending into a depression economy and make pitiful profits (if any).

Do you really want to own Greek bank stocks? It would take a lot to persuade me of the merits, and I think they’re best avoided. The rest of the fund is mostly made up of energy, shipping companies and public utilities. Again it’s hard to get too excited given what we know about Greece, and the generally tepid growth of the world economy.

Greek stocks look cheap, but the country remains bankrupt and mired in a grinding depression. If you get in now and are very patient you might make low to mid single digit annual returns over time. But if the country ever does leave the euro and devalue then prices will collapse in dollar terms, as local Greek earnings and assets are written down.

Until Greece has a resolution to its huge debt overhang, and a currency devaluation, it’s difficult to get excited about investing there. There are better opportunities in the world.

So I continue to reckon you should steer clear with your investments. But you might like to take a holiday there. I’m sure the Greeks would welcome you and your money with open arms.