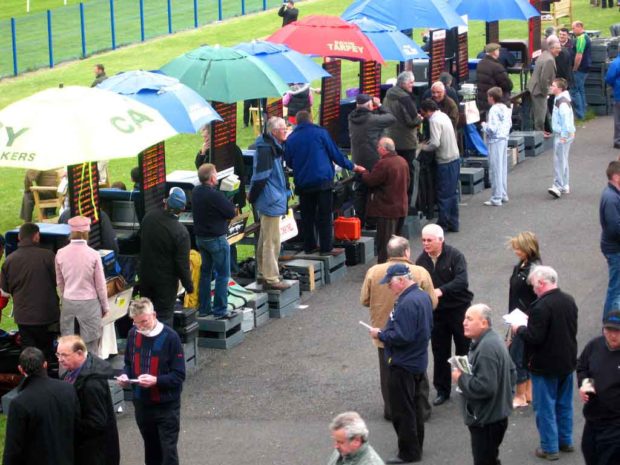 There’s a line that’s sometimes trotted out in the media which makes the market professionals laugh. “Prices went up because there were more buyers than sellers.” But, just as there are two sides to a coin, there must be two sides to a trade. So what is really meant by “market price”? How are prices set in securities markets?

If you want to see a fast moving market in live action then one of the best places is at the horse races. At least, at the horse races I’ve been to in England, where a lot of the bets are taken by private bookmakers, or “bookies”. Maybe it’s the same in your country.

These guys (and they almost always are men) tend to be real characters. Fast talking, dressed to impress in a bygone era, and often lurking on the grey fringes of criminality.

When there’s a race meeting the bookies are given a spot to stake out their trade. Often you’ll see dozens of them set out in a field.

They’ll be formed up in two parallel lines, facing each other about 20 feet (6 metres) apart. Each has a big board where they write up the betting odds on offer for each horse in the next race.

“Ends Of The Earth 6/1” means if you bet £1 on the horse of that name and it crosses the line first you’ll win £6 and get your original stake back too. “Oops I Did It Again 2/1; Chinese Dream 20/1; Sir Winalot 100/1” and so on. From this you know that Oops I Did It Again is the favourite, and Sir Winalot is a long shot.

Each set of betting odds signals the bookies’ opinions, and is the market price at which he’ll sell a bet on a horse. If a huge amount of money is bet on one horse you can expect the odds to shorten. That’s because the bookies are now on the hook for big payouts if it wins.

Because this is a fast moving market for money, most of these guys operate in pairs. One will take cash from the crowds of eager race goers and hand out the paper betting slips. The other acts as a spotter, standing on a chair and keeping a careful eye on the competition. He’ll then adjust his odds accordingly. Getting the odds right is essential for bookies that want to keep themselves in trilby hats and sheepskin coats.

I’m certainly not a big gambler, nor do I often go to the races. But it’s fun to stand in the middle of the throng and watch the action. Occasionally a big opportunity opens up.

Maybe you see that the nearest bookies are all offering 5/1 on “Goes Like The Clappers”, but down the line one of the others has dropped his guard and is offering 7/1. Then you pounce and quickly place your bet before he realises his mistake.

That would be a good deal. But it also helps to show how markets work, especially ones with fluctuating prices.

You had cash in your pocket, and at 5/1 you weren’t tempted to bet it on “Goes Like The Clappers”. But at 7/1 your were drawn in. Money was exchanged for a piece of paper – in this case a betting slip.

Let’s now turn to markets in financial securities such as bonds and stocks. There are no bulky men in thick coats setting prices (or if there are you really must find a new broker). So how do share prices get set?

The market mob is made up of millions of actors with different motivations and opinions. All are very different animals, albeit mostly grouped into species that are bipedal.

Some are traders or speculators, just looking to profit from short term price swings. The “in and out” mob. In extreme cases there are hedge funds that use powerful computer algorithms to trade in and out in milliseconds, hoping to clip tiny gains but millions of times over.

Others are momentum traders, looking to profit from price trends in the space of days, weeks, months, or even years. They see that something is going up, so they get on the bandwagon, hoping to jump off before the music stops.

Another type of investor is the buy and hold type. They don’t really care where the price goes in the short term. They just want to be in the market, owning a lot of stocks in solid companies that they expect to grow over the years and decades. Warren Buffett is probably the most famous example of this kind of investor.

Big pension funds also tend to have huge holdings of stocks. They fine tune them over time. But mostly they hold a big, fat unmoving core of stocks that they never sell.

There are even players that keep buying, come what may. They’re pretty much insensitive to how much they pay. This group includes companies that buy back their own stock to support the price, and central banks like the Bank of Japan.

The point is that traders and investors may look like one big market mob to the casual observer. But if you look more closely you realise the mob is actually made up of lots of very different individuals and sub-cultures, all with different ideas and often trying to achieve different things.

They all want to make money, but that’s about the only thing they have in common. So this brings us back to the original question: how are the market prices set?

Put simply a market price is the point where any one (or more) of those investors is motivated to buy a stock from any other investor that feels motivated to sell at the same price. In the same way that a punter at the races is tempted to place a bet if he thinks the price (odds) is favourable enough.

In other words, every seller needs a buyer, and vice versa. Which is why that line about prices rising “because there were more buyers than sellers” is so amusing. It can’t happen.

Also, when prices rise it’s not because there’s “more money coming into the market”. Every time someone buys into stocks in a rising bull market, someone else is cashing out. It’s a wash – with money neither entering nor leaving the market (apart from the charges made by the brokers and other financial intermediaries).

All that’s happened is that the point of equilibrium where marginal buyers and sellers will voluntarily transact has shifted to a higher price level. Prices are up. Market capitalisations rise. That’s it.

Of course, when you look at it this way you realise that the concept of the “efficient market hypothesis” (EMH) is way off the mark. Put simply the EMH claims that stock prices always incorporate and reflect all relevant and available information that’s been made public. It was first developed by an economist called Eugene Fama back in 1970.

Basically, the EMH says that everything that determines something’s worth is always fully built into the price. It also assumes that all traders are acting rationally, and using all available information.

This is clearly bunkum, drivel and nonsense. If it was true then everyone in the marketplace would have to have the exact same information, skills, ideas, opinions, and motivations. It doesn’t take a genius to work out that this can’t be true, although it does take a “genius” to think that it could be.

Other market participants – the ones that aren’t trading with each other – simply carry on eyeing each other up from different sides of the room. They’re waiting to make their move, like awkward teenagers lined up along the walls at a school dance. Something needs to happen for them to be drawn onto the dance floor.

Of course I’ve only touched the surface, and there’s a huge and multi-decade debate about the EMH and other theories. But if you apply a bit of common sense you can see what’s really going on, and what’s really meant by “market price”.

You can dance if you want to. You can bet on the horses too. Or you can just stay up against the wall. It’s all voluntary.

Once you understand that, it will help you to be a more profitable investor.