Exchange traded funds (ETFs) are an easy and cheap way to invest in stocks. But often there are many ETFs to choose from that cover a particular country or sector. Today I’ll examine the main things to look for when choosing the right ETF for you. Some may seem fairly obvious. But others are not so widely understood.

An OfWealth reader called Alain V. wrote to me after my recent article about “The hated stock market that beats the USA”. Here’s part of what he had to say:

“I just finished reading your Russia ETF recommendation. (In 2016) I invested in the RBL ETF instead of your ERUS recommendation. Why? Both were identical (price performance).

I then looked at the issued dividends. RBL total gross dividend was 5% in 2015, while ERUS was only 3.5%. If you plan to hold longer term, as I do, this is a major difference, when both charts have an absolutely identical chart curve evolution. And yearly ETF maintenance fees are similar.”

Thanks to Alain for his thoughts. All reader comments and questions are always welcomed (robmarstrand@ofwealth.com).

You may or may not find (currently dirt cheap) Russian stocks appealing. But I’ll use Alain’s example to illustrate the issues when choosing the right ETFs.

A top priority for all investors is to identify attractive places to invest in the first place. By that I mean investments that are likely to generate a decent profit for an acceptable risk. But picking the right investment target is only part of the profit equation. The other part is how much it will cost you to do it.

If the going rate is 0.5% a year then there’s no point paying 1%. An extra 0.5% a year can add up in the long run. Over 30 years, and with compounding, it would clip an extra 14% off the value of your investment. That’s a big potential hit to a retirement fund.

When it comes to ETFs, fees and net dividend yields are linked. That’s because distributions to investors are made net of costs. So if the ETF invests in an index that yields 4%, but costs come to 1% (including fees charged and any other costs, such as dealing costs), the ETF investor can expect to get 3% net dividend.

This is important to understand, because it usually explains most of the difference between the expected dividend yield from an index and the actual payments received by ETF investors. The higher the fees the bigger the difference.

These are general principles. Now I’ll go into more detail by comparing specific ETFs for the Russian market. The ETFs I’ll look at are:

RBL, ERUS and RSX all invest in large companies (“large caps”), which are more easily traded. Their fees are fairly similar, running to 0.59%, 0.65% and 0.67% respectively. RSXJ delves into smaller Russian companies, so it’s not a surprise that fees are slightly higher at 0.77% a year.

Who’s managing the ETF and how big is it?

All of these ETFs are provided by well established fund managers with big reputations at stake, and deep pockets for anyone that wants to sue them. These traits are desirable for the investor. Sometimes you come across niche ETFs in interesting areas run by practically unknown fund managers.

That’s not necessarily bad, but it means taking extra care. In the past I’ve come across small managers who have suddenly, and without warning, completely changed the index that an ETF tracks or just the ETF strategy in general.

Next is the ETF size. Small ETFs sometimes get shut down because the fees they generate don’t cover the costs of running them. Alternatively the fund manager might decide to jack up the fees.

Here’s how those four Russian ETFs look when it comes to market capitalisation (which simply means market value of all shares at the current price). 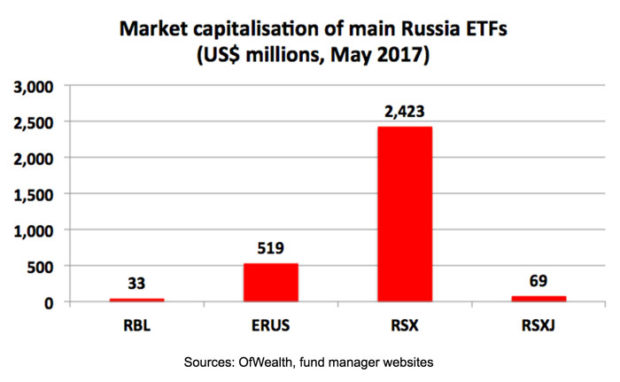 Clearly RSX is well ahead of the rest, at over US$2.4 billion, although ERUS is a decent size too, at over half a billion. I tend to get uneasy when and ETF’s market capitalisation is below US$50 million, so I’d probably avoid RBL. But I definitely don’t recommend anything below US$20 million. There’s no hard and fast rule here. Just realise that tiny ETFs may get shut down before you’ve had a chance to make a profit.

What does the ETF actually own?

Next up is what they actually invest in. It’s one thing to say “Russian stocks are very cheap”. But what does each Russian ETF actually own?

Something to consider is the number of underlying stocks. More stocks, across more companies, means less exposure to individual company failure. Some ETFs contains hundreds, or even thousands, of individual stocks. Others contain just a handful.

In the case of our Russian ETFs, RBL is the most diversified with 48 holdings, ERUS has 28, RSX has 31 and RSXJ has 26. Small cap stocks tend to be more risky, particularly in emerging markets such as Russia. So investors in small-cap ETF RSXJ need to bear in mind that this ETF also has the fewest underlying stocks.

Another important area, especially for a country or regional ETF, is sector diversification. This next chart compares the investments of each ETF by business sector.

Clearly energy (oil & gas) and materials (mining) play a big part in all of these ETFs. The largest exposure is in ERUS, which tracks the MSCI Russia index. And the lowest exposure is in RSXJ, which isn’t surprising since it focuses on smaller companies.

In the past I’ve tended to recommend RSX as my preferred Russia ETF. It’s focused on large companies but has slightly less, although still high, exposure to the volatile energy and materials sectors.

More recently my opinion has changed, although it doesn’t matter too much if you already own RSX. You can stick with it. However, if I was initiating a new position I’d choose ERUS, as I recommended last week.

The reasons for this are twofold. Firstly, in practice the performance of these ETFs has been similar, despite the different sector allocations. Here’s a chart which compares the three large cap ETFs since February 2015: RBL (in yellow), ERUS (blue) and RSX (red).

As you can see there’s little to choose between them. Given this we need to focus on the other part of profits: cash distributions. These are the dividends received by the ETF from its stock investments, less fees and other costs, with the balance passed on to ETF investors.

Dividends can make all the difference

The payouts can jump around from year to year beyond what you’d expect from the underlying index that’s being tracked. And customer “service” departments at fund managers rarely give adequate answers when asked what’s going on (I’ve tried several times).

So I’ve looked at the last three years of net distributions for these ETFs and compared them with each other to see if there’s a pattern. In each case I’ve taken the net dollar amount actually paid during the year and divided it by the current ETF price in the market. In other words you can compare the yields between ETFs in each year, but it’s meaningless to compare the calculated yields between years.

Looking at this confirms what reader Alain said about RBL having a relatively higher yield in 2015. But it’s since dropped off. ERUS had the highest net yield more recently. It’s also had the most consistently high net yield across three years, which is another reason to like it.

Over the three years, ERUS yielded an average of 0.77% a year more than RSX, and using last year’s payout yielded 0.58% more than RBL (although averaged the same over three years). Clearly such a difference can add up over time.

I’ve looked at the main issues when choosing the best ETF, using Russian stock ETFs as examples. I recommend you take this approach whenever faced with how to choose the best ETF for the job you want done.