US stocks look expensive by just about any measure. But even when you buy near the top of the market you’ll still make money…eventually. It’s just it could take a decade or more. Today I look at how the S&P 500 performed after it was last at today’s valuation multiples. It gives us some clues as to what to expect.

There’s a double compounding effect that underpins stock market investment. Company earnings grow as a portion of profits are reinvested, making stocks more valuable over time and driving up their prices. At the same time investors can use dividend cash to buy additional stock, net of any income taxes due. The combined effect explains why diversified stock investment always beat bonds or bank deposits in the long run.

Below is an analysis by JP Morgan Asset Management of the range of outcomes for US investors over various holding periods between 1950 and 2015. It compares stocks, bonds and a 50/50 portfolio of both. 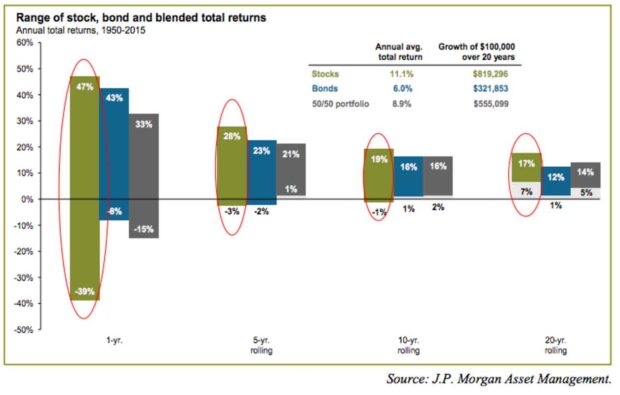 Stocks can be volatile in the short run but have always turned a profit in the long run (although note that these figures aren’t adjusted for inflation). Stocks also beat bonds over long periods of time. What’s more, these observations are true globally, and not just in the US. 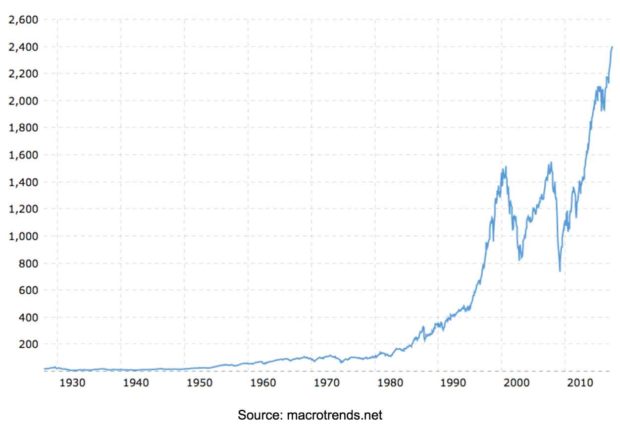 That line clearly shows exponential price progress. That’s even though it excludes the second source of profit compounding enjoyed by stock investors, which comes from reinvested dividend income. Add in reinvested dividends and the results are even better.

The average compound price gain was 5.5% a year between December 1927 and December 2016. Inflation averaged 3% a year, so real (inflation-adjusted) capital gains were 2.5% a year.

I don’t have precise data for the average dividend yield over this period, but it was 4.4% between 1900 and 2013 according to Credit Suisse, the investment bank. Assuming it’s similar for the period from 1927 to 2016 (which it will be), that points to nominal total return of 9.9% a year, and real total return of 6.9% a year. Remember, these returns are pre-tax.

The point is that large groups of stocks, like the S&P 500 index, always go up in the end. It’s just that sometimes, when investors bought expensive stocks after a long bull market, it was a very long wait until a profit was made.

What can today’s US stock investors expect?

Which brings us to today. It’s no secret that US stocks look expensive against most of their history by just about any measure. (See this link for my latest take on the situation.)

The big question is: If you own US stocks today, how much are you likely to make in future?

Unfortunately, the US stock market is harder to analyse that most others. That’s because of a modern, US corporate obsession with stock-based compensation (large handouts of executive stock and options) and, not coincidentally, with huge stock buybacks to compensate. The buybacks are necessary to prop up earnings-per-share (EPS) and mask the insider looting.

Here’s a chart comparing gross buybacks and dividend yields for different places, clearly showing how the US is an outlier when it comes to gross buybacks: 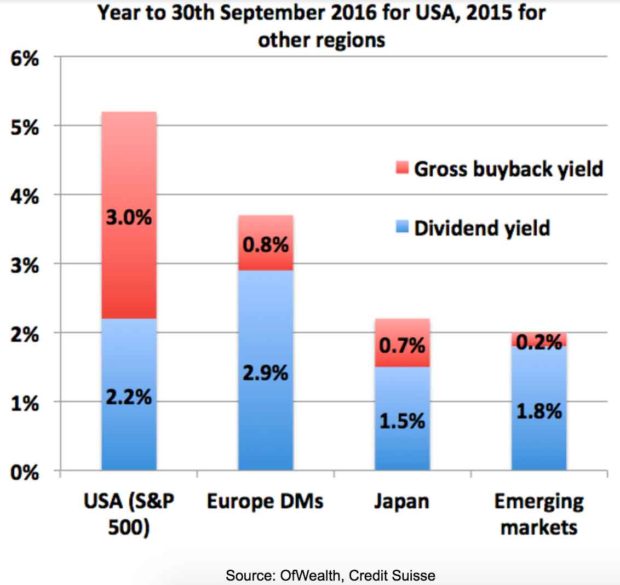 This presents various issues for investors in US stocks. The first is working out how much stock is going to be handed out to managers and employees, thus diluting existing shareholders and offsetting the apparently juicy gross buyback yield.

At the S&P 500 index level this seems to be in the 1% to 1.5% a year range, but I’ve found it hard to get reliable data. Put another way, the net shareholder yield on US stocks is probably similar to Western European ones.

This chart shows how US buybacks have grown from virtually nothing in the early 1980s to a large share of profits, and also how volatile the payouts can be: 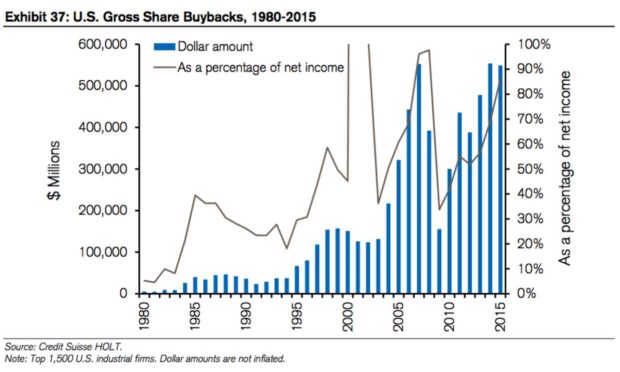 Whereas this chart shows the relatively predictable path of dividends (and their exponential growth pattern over time): 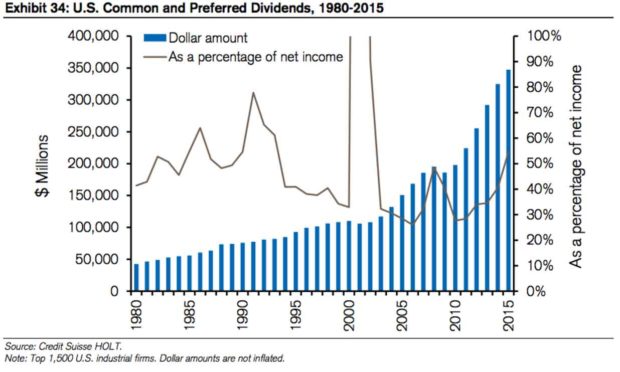 All in all this means the waters of US stock markets are considerably muddied by financial engineering. Nevertheless, I’ve made my own estimates of likely future returns on the S&P 500, assuming no change to valuation multiples. This takes account of inflation, real profit growth, dividends, buybacks, stock-based compensation and any other factor that’s relevant.

My analysis points to about 5% a year nominal annual total return in future (capital gains plus dividends). Which is to say about 3% real annual total return, assuming average inflation of 2% a year in future. That’s below the 3% a year historical inflation average, given we’re now living in an ageing and indebted society (and it’s the US Federal Reserve’s target).

A projected real return of 3% a year is way below the long-term historical record. In fact, once you completely strip out any changes to valuation multiple, the real return was a little over 6% between 1900 and 1980, 5% between 1980 and 2005, and less than 3% over the last 10 years (including the financial crisis) and the last five years (post-crisis).

In any case, no one knows the future and my figures are just guesstimates (as are any anyone else’s projections, if they’re honest). So I’m going to try something else to see if it gives us more insight.

What can recent precedent tell us?

What if we look at a range of valuation multiples in today’s market. Then how about we look back at the last time they were at such a level. And then we calculate how much investors made in between. That could give us some clues as to what to expect in future from today’s starting point.

Actually I’ll use December 2016 as “today”, just because it’s easier when I’m calculating average dividend yields with the data I have. Market valuation multiples come from multpl.com. So here goes…

I’ve used the current (trailing) P/E ratio, cyclically adjusted P/E (CAPE) and price-to-book (P/B) ratios. You’ll notice that with the P/E I’ve started way back in 1998. P/E went up further during the end of the tech bubble, then collapsed. But at the end of the last market boom, in October 2007, it was only 20.7, a far lower reading than the end of 2016. So I’ve gone back one more market cycle as the starting point.

Here are the results:

The results show a range of real returns between 4.4% a year and 5.2% a year, with an average of 4.9% a year. That’s quite a bit more than my own forward looking estimate of 3% real return in future, given today’s market levels.

So are things rosier in the US stock market garden than I’ve been assuming? Have I been wrong about what to expect from expensive US stocks? Based on this historical evidence it’s possible.

But there’s a really important thing that we mustn’t forget. These are really long periods of time that I’ve looked at, from 10 years to more than 18 years. If we get anything like a repeat of market moves from past highs – with sharp falls before steady recoveries – then investors in US stocks will still need to have strong stomachs, even if they trust in the long run.

Not to mention that interest rates are still ultra low and corporate debt levels are high. If rates normalise – which they must do eventually – then there could be a substantial drag on profits, and hence stock prices.

One other thing. To get decent results we have to see multiples stay at, or return to, very high levels. What happens if there’s a slow slide to lower levels? Or if there’s a sharp correction or crash and multiples don’t crawl all the way back up again for, say, 20 years? It’s happened before.

US stocks are always likely to be good investments in the ultra long run. And even if they’re bought at today’s high multiples there’s a reasonable chance of making a decent real return over a decade or more.

It’s just that you might need a lot of willpower to hold on long enough to see the results. And, given the high multiples of today’s market, if your investment horizon is less than a decade then you should be seriously wary. I reckon that includes most people.

In the meantime there appear to be richer hunting grounds with better prospects elsewhere in the world (see here for more).