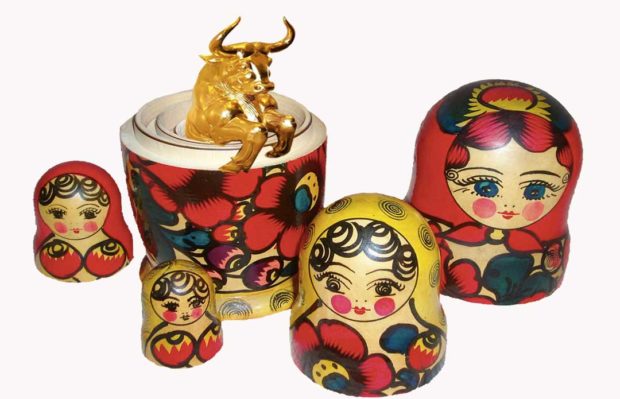 Exactly one year ago today I explained why I thought stocks in Russia were a much better bet than stocks in the USA. With lots of twists and turns along the way, Russian stocks have so far outperformed US stocks by nearly 7%, when both measured in US dollars. But there’s a lot more potential over the medium term. That’s why I’m still buying Russia and selling the USA.

Last March I took a look at 16 developed and emerging market stock markets, from Brazil to Japan and from Germany to India.

The analysis was based on four measures of valuation: dividend yield, price-to-earnings (P/E), price-to-book value (P/B) and P/E10. The P/E10 is also known as the cyclically adjusted P/E (CAPE) or Shiller P/E.

My aim was simple. By looking at a cross section of markets in a range of ways I could show you which ones looked cheap and which ones looked expensive. You can find the full article here, including an explanation of the P/E10 (CAPE).

This led to a logical recommendation: buy Russia and sell the USA.

The analysis may have been fairly complex. But the recommendation was little more than common sense, which is often the investor’s greatest weapon.

As recently as five or so years ago I had an incredibly negative perception of Russia, just like most people from the “West”. I’d grown up surrounded by the (deservedly) anti-Soviet propaganda of the Cold War. But since the collapse of the USSR I was exposed to the (still) incredibly negative, biased and inaccurate Western media coverage concerning anything to do with Russia.

As it turned out, I eventually realised that my perception was about 10 to 15 years out of date. Not least because I visited the place (recommended – and cheap at the moment).

In Moscow I met representatives from an extremely successful US$5 billion hedge fund that had been operating in Russia since 1996, when things were still a big mess. They were real pioneers. Their expertise and experience set me straight on a lot of misperceptions that I had, and further research has only served to confirm their views.

Whether you love or loathe Russian president Vladimir Putin is essentially irrelevant. What matters is to recognise that times have changed and Russia’s finances and economy are much stronger than during the chaotic 1990s.

Whether you love or loathe Russian president Vladimir Putin is essentially irrelevant. What matters is to recognise that times have changed and Russia’s finances and economy are much stronger than during the chaotic 1990s.

Russia is still a relatively new democracy, after many decades of communism and centuries of monarchy before that. There’s obviously still a lot that can be improved.

But it’s the general trajectory that matters. I believe that Russia is generally on the right track when it comes to its economy and finances, even if there is plenty left to reform.

And okay, I know Russia is currently in recession. A combination of the collapse in commodity prices – especially oil and gas – and Western sanctions linked to the spat over Ukraine have weighed on Russia in the short term.

But commodity prices are now rising again, and sanctions rarely last forever. Besides, the Russians have done much to adapt to them by finding new export markets or by producing more at home to replace imports. Things will improve and the bad news is already in the stock prices.

If we want to be successful investors, we need to seek out more than the daily diet of tripe served up by the mainstream. Domestic media and politicians feed us biased views all the time, reinforced by what they think we want to hear. That’s no basis for an intelligent investment strategy.

So let’s get back to comparing how the Russian and US stock markets got on over the past year. Here’s a chart comparing the MSCI Russia (orange) with the MSCI USA (green) for the past 12 months, both starting at 100 for easy comparison. It shows total returns – including capital gains/losses and dividend income – and is in US dollars (comparing apples to apples). 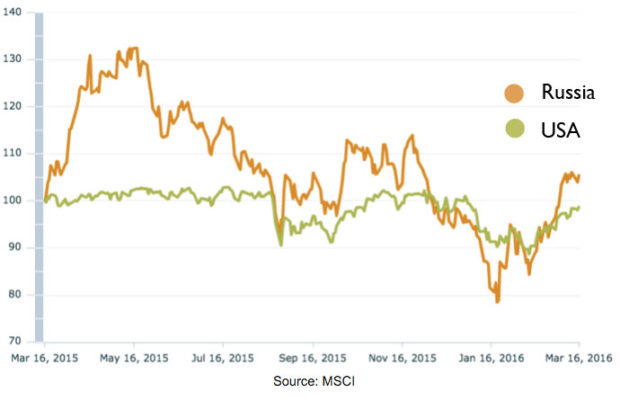 Clearly Russia got off to a blinding start, up over 30% at first. But continued weakness in commodity markets put paid to that, not least due to a weakened currency, the Russian rouble. After reaching a new low in January the index has bounced back. US stocks have gone mostly sideways, with occasional dips and bounces.

That’s a decent outperformance in generally unsettled markets, but nothing to write home about. What’s more, almost all of the gain on Russian stocks has been due to the high dividend yield, and not rising prices.

That explains precisely why I still prefer Russia over the US. Russia is still cheap and the US is still expensive. The Russian market P/E is 8 and the US P/E is 22, or practically three times as high.

Here’s an extra little factoid for you to tuck away. Since the MSCI Russia index was launched in December 1994 its total return performance has almost exactly matched the MSCI USA index.

Well, for a start it shows that Russian companies have been successful at growing profits. In the long run – and over 21 years is long enough – it’s profit growth that really counts for stock market investors.

But even more amazing is that it’s despite the Russian market being very cheap today, and the US market being distinctly richly priced.

I reckon the US market should be trading about a third below its current level and the Russian market should be at least 50% higher. If that happened overnight then Russian stocks would have outperformed US stocks by a factor of 2.3 since 1994.

While we (continue to) wait for that discrepancy to sort itself out the Russian market pays a very healthy dividend yield of 4.7%. That leaves over 60% of corporate profits to invest in maintenance and growth (the earnings yield is 12%).

The US market has a total shareholder yield of 5.5%, including both buybacks and dividends. But, as I explained earlier in the week, that’s more than the companies make in profits. In other words there is nothing left to invest in business growth, unless the money is borrowed.

Running some numbers (as I often do behind the scenes), at current profitability levels Russian stocks look good for a 9-10% annual return. That’s even assuming the P/E doesn’t go up. It would work out at 56% in total over five years, with compounding (profits on the profits).

And if commodity prices continue to recover then earnings in the important resources sector will improve as well. Plus the Russian currency would be likely to strengthen, making rouble assets and earnings worth more US dollars. Combined with a rising P/E I wouldn’t be at all surprised if returns were twice as high: around 20% a year.

On the other hand prospects for US stocks look poor in the medium term, and possibly sooner. To get to their historical medians, the P/E would have to fall by 35% and the P/E10 (CAPE) could have to fall 37%. So let’s take the average of 36%, and say the multiples fall that far over five years, in a slow but gradual slide.

If profits don’t grow – and I don’t see how they can grow much with no investment – and the cash payouts stay the same (dividends and buybacks) that would result in a total net loss of nearly 9% spread over five years. Even zero yielding dollar cash looks like a better bet.

That’s not even taking account of a full blown US market crash – which is a very real risk. Or of a squeeze on earnings as record profit margins are eroded.

Which would you choose over five years? A likely total profit of 50% and possibly much more? Or a likely total loss of around 10%, with the potential for further red ink.

It seems pretty obvious to me.

Of course we can never know for certain how things will turn out. But we can stack the deck in our favour.

That’s why I’m still buying Russia and selling the USA.

Emerging MarketsInvestment StrategyLong Term InvestingRussiaStocksUSAValuation
Previous ArticleThe S&P 500 is being looted by managementNext ArticleIs it time to invest in Argentina?