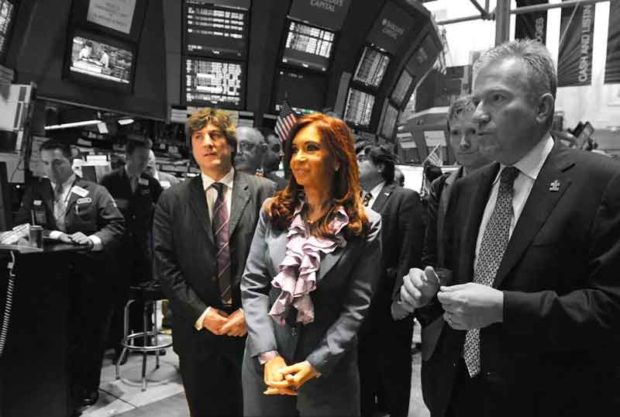 Back to Argentina…back to the big city…back to a massive new corruption and bribery scandal.

It’s sweeping up senior functionaries of the previous government, implicates the last president (and the one before that), and many business people have already turned themselves in. Also, it was dug up by a creature that’s rarely spotted out in the open these days…good old investigative journalism by a newspaper.

More on that in a minute…and a quick look at plummeting Turkish stocks. For now, a short detour into politics in general.

Much as I’d like to restrict these missives to the purely financial, to investments and how to profit from them, politics often gets in the way. Some people think that macro environments don’t matter when it comes to investing. I strongly disagree.

That’s not to say that getting into the weeds of individual investments isn’t important. Understanding the nitty gritty is essential to maximise the chances of success. But the macro picture matters as well. And, unfortunately, that means keeping at least one periscope trained on political developments.

Time for some definitions (from the Concise Oxford English Dictionary):

politic (adjective, of an action) seeming sensible and judicious in the circumstances

politics (plural noun, usually treated as singular) the activities associated with the governance of a country or area

politician (noun) 1. a person who is professionally involved in politics. 2. (chiefly US) a person who acts in a manipulative and devious way, typically to gain advancement

Hmm. Apparently it’s all in the suffix…an ‘s’ here, and an ‘ian’ there. Perhaps it’s time we all renamed our high representatives. Those ‘public servants’ engaged in the (apparently) crucial activity of wasting tax money and driving us towards bankruptcy. Let’s see…what are some antonyms for “politic”…

Hence a proposal: we should rename the un-ruling (or unruly) class the “impoliticians”. At least it would be closer to the mark.

But let’s get back to the latest Argentine scandal. In short, a driver for a senior ex-bureaucrat in the planning ministry has unwittingly blown open a whole can of worms.

Said driver, a man called Oscar Centeno, kept a meticulous diary for many years of multi-million dollar money drops, meaning big bundles of (green) cash in bags. That was under the previous two governments headed by Nestor Kirchner and then his wife Cristina Fernandez de Kirchner. Some of those bags were (allegedly) delivered to the private or official residences of those presidents. Many went elsewhere.

It’s estimated that the total comes to around US$160 million. But that’s probably just the tip of the iceberg. Centeno was just one driver for one department. This could turn out to be the Argentine equivalent of lava jato, the umbrella name for huge bribery scams in Brazil that have run to billions of dollars. In that country, dozens of politicians and business people have found themselves behind bars.

The diaries weren’t disclosed by the driver himself. Along the way, in fear for his own wellbeing, he gave them to someone else to look after for a while. Copies were made, and in March they were passed to a journalist at La Nacion, a leading Argentine newspaper. The paper did its job, investigated further, and brought the evidence to light last week. Centeno has confirmed the records are real and is in protective custody.

Nestor Kirchner died suddenly in 2010, of a heart attack. Cristina had already taken over the presidency in late 2007 (in name, at least). She’s now a senator and, as such, enjoys a certain level of immunity from the law (an absurdity that’s not uncommon). But a process is in place that could allow searches of her homes and offices. Still, she has plenty of time to do some housekeeping before that happens.

Corruption is nothing new in Argentina. In fact, Cristina’s vice president – an appropriate title – will find out today if he’s going to jail. Amado Boudou is alleged to have forcibly expropriated one of the main money printing houses for his own benefit.

Since so much money was printed by that government, presumably he could see the excellent business opportunity. Incidentally, he was previously the finance minister. You couldn’t make this stuff up…

(For more on the current perils of investing in Argentine stocks, see here. Note that the peso has devalued substantially since I wrote it, back in May. But I still think Argentine stocks are overpriced for a high-inflation environment.)

Of course, corruption isn’t unique to Argentina. It’s just less subtle than in most countries. Here, favours are gained with bribes, or bribes are extracted for contracts (although the current government has clamped down). In other places they call them “campaign contributions” or “lobbying”. Same old, same old…just a different legal status.

Beyond that, politics is having plenty of effect elsewhere. The simmering US-China trade war…Brexit shenanigans…Italy’s new nationalist government…sanctions re-imposed on Iran by the US…the EU initiating its “blocking statute” to protect European companies that do business in Iran from US ire…a project in the US senate to impose further sanctions on Russia…even sanctions on Turkey, an increasingly authoritarian NATO member, for not handing over an American priest (who some say is actually a CIA agent).

Impolitic politics, always and everywhere. As investors, we need to keep an eye on it all, and what it could mean for our investments – for either good or ill.

Don’t believe me? How about Turkish stocks, which are something I’ve deliberately avoided for years despite apparently attractive valuations (e.g. see here). The macro environment put me off (including the wars in neighbouring Syria and Iraq and the slide into authoritarian government, plus a decent dose of inflation). The latest spat with the US has driven them off a cliff.

At the end of July, the MSCI Turkey index had a very low price-to-earnings (P/E) ratio of just 7 and a high dividend yield of 4.9%. But things keep getting worse, as the political situation deteriorates.

Turkish stocks, priced in US dollars, are now approaching the deep lows last seen in 2009, during the worst of the global financial crisis. The local currency, the lira, has lost over three-quarters against the US dollar since 2008. In fact, you could have bought Turkish stocks as far back as 2005 and not made a bean of profit, in dollar terms.

Here’s a chart of the iShares MSCI Turkey ETF (NASDAQ:TUR), which is priced in dollars, to illustrate the point. 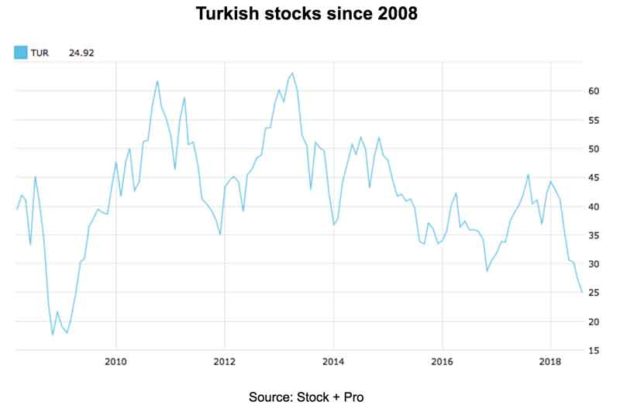 There will probably be loads of money to make from Turkish stocks at some point, but it still feels too early. However, it’s worth watching for a potential future “crisis vacation”.

My general advice about this stuff? Don’t get stressed about things you can’t control. Keep calm…do what you can to protect yourself (buy cheap and stay diversified)…and look for profit opportunities when prices overreact and hit the skids.

Over my 25 years in finance and investment I’ve seen many crises and major market sell-offs. Once the dust had settled, all of them offered massive opportunities for profit, as prices bounced back.

As for now, you should own cheap stocks of solid companies (see OfWealth 3D Stock Investor for carefully screened ideas)…hold some gold…and keep plenty of cash “ammo” on the sidelines to scoop up bargains when they come along.

That would be most politic.