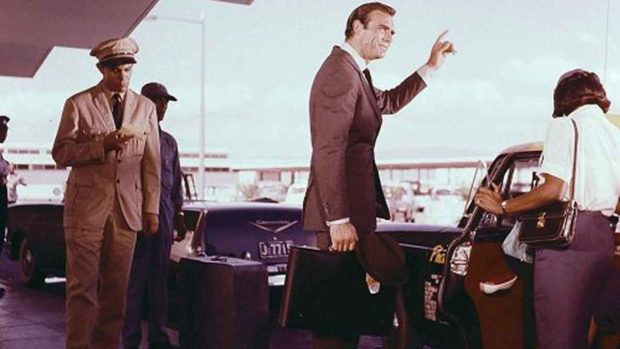 On 29th September last year I made a recommendation of how to split your financial investments. It was based on how I saw the investment landscape at the time. That landscape has now shifted a little, and it’s time for some tweaks. Stocks are reduced and I’m adding a small allocation to US treasury bonds for the first time.

A lot of stocks are trading with huge valuation multiples, or even in bubble territory. Most bonds still offer pathetic yields. In fact trillions of dollars’ worth still have negative yields, making them as appealing as a leper waitress.

On the back of this, debt levels spiral ever higher. Central banks continue to manipulate markets with money printing. Many countries have housing bubbles once more.

For a recap on these themes, you can take a look at these links to recent articles:

Put another way, there are plenty of risks and relatively few safe refuges for your wealth. By which I mean reasonably priced investments that offer the prospect of a decent return at an acceptable level of potential peril.

Fortunately there’s always something on offer, somewhere. It’s just that, at times like these, you have to search harder and farther. As far as stock markets go I’ve made nine buy recommendations in the past couple of years to readers of the (free) OfWealth Briefing.

These have included recommendations in Russia, China, Germany, Norway, South Korea, Colombia, Japan and other Asia. Of those nine, six have made a substantial profit, two a modest profit, and only one has made a loss.

The median capital gain is 21%, over an average time period of a little over two years. I need more time to collate all the dividend income, but I expect it to add roughly 3% on average, bringing the median profit up to around 24%. I think that’s a good result in these markets.

(For comparison, the S&P 500 is up about 16% over two years. Add about 4% of dividends and the total profit is around 20%. The difference with my own selections is that none of mine needed to reach bubble territory to get ahead.)

In a perfect world I’d always want most of my investment portfolio held in stocks. That’s because, over the long run, stocks perform better than any other mainstream investment, such as bonds, gold or cash.

The reason is that stocks offer what I call “double compounding”. You’ve probably heard of the “Power of Compounding”. It refers to the way that investors can make profits on their profits, assuming they use their investment income to buy new investments.

Something that generates income of 10% a year doesn’t make you 100% over 10 years. Instead, if the annual income is always reinvested in something that also makes 10% annual income, the actual profit after 10 years would be 159%. That’s compounding in action.

Stocks are special because they have two sources of this compounding. Firstly, dividend income can be reinvested each year to buy more shares (similar to my example). Secondly, the value of the shares also increases over time (usually), as a piece of company profits is reinvested in business growth.

Bonds, by comparison, only offer the first source of compounding, from reinvested income. That’s a large part of why they underperform stocks in the long run. (Although they’ve done abnormally well since the early 1980s as yields have fallen to record lows.)

That said, if you buy stocks when they’re expensive then you’ll make a much lower return than if you buy them cheaply (you’ll find an explanation in here). Or you’ll have to wait a very long time to make any profit at all, assuming valuation multiples fall from their elevated levels at purchase.

So, in my perfect world of mostly investing in stocks, there would have to be a lot of cheap stocks around, or at least reasonably priced ones. In that event, assuming that the money wasn’t needed for 10 years or more, I’d want a portfolio that contained as much as 90% in stocks, with the rest split between bank deposits (or cash) and gold.

Unfortunately we’re not in one of those perfect world moments. There simply aren’t enough decently priced stocks (or stock markets) around to put all your money into this asset class and stay sufficiently diversified.

Also, with the massive US market trading at such high valuations, there’s a good chance of a crash at some point. That would almost certainly drag down everything else in the downdraught.

So I continue to think it’s worth putting aside plenty of cash “ammo”. It may not offer a meaningful return right now, in this low interest rate environment. But if (when) the stock market crash occurs it will provide peace of mind, and the ability to scoop up loads of bargains in the aftermath.

[Note: Originally I made the recommendations by way of a range for each category. But I’m switching to one number from now on. However, you can view these as rough targets, within a range of 5 percentage points above or below, and not hard and fast numbers.] 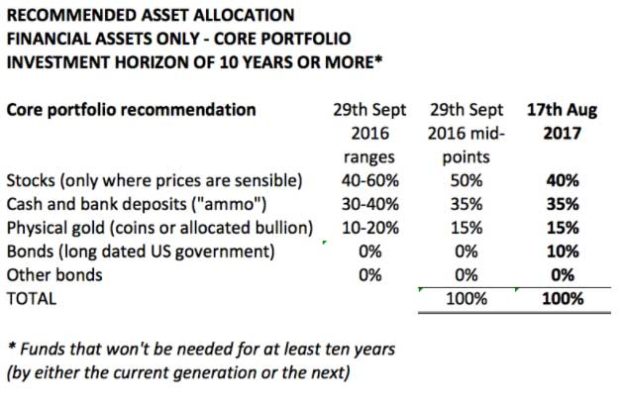 The changes are a reduction of the allocation to stocks to 40% and the inclusion of a 10% allocation to US treasury bonds for the first time.

I’ve already explained the reason for holding stocks. It’s the main profit source, via the power of “double compounding”. But I’ve trimmed the allocation because of the expanding bubble in the US.

That said, in general I don’t recommend owning expensive US stocks. That’s why it says to own stocks “only where prices are sensible”. A quick look at the following table shows why Emerging Markets and Developed Europe currently provide better hunting grounds for bargains than the US. But you still have to be selective.

I’ve already explained the rationale for holding plenty of cash at the present time, so let’s turn to gold (preferably of the physical kind, meaning coins or allocated bullion). I expect gold to beat inflation over the long run as relatively fast wealth growth in the world’s vast emerging markets continues. That means strong demand, for what I call “the ultimate consumer good”, running slap bang into relatively limited supply and driving up the price.

Physical gold is also insurance against another huge financial crisis, an inflation hedge, and a general diversifier from stocks. For these reasons it remains a core part of the portfolio, even if my perfect world portfolio would contain less of it.

Finally, I’ve included a 10% allocation to long dated US treasury bonds for the first time. This was a close run thing, and I don’t really like them in and of themselves. A 10 year treasury yields just 2.21% and the 30 year yields only 2.79%.

Admittedly that’s better than what’s on offer in Japan and much of Europe. But I’d like to see yields above 3%, meaning some sort of (almost) reasonable return after inflation can be expected.

However, with US stocks so overpriced there’s an ever increasing risk of a major setback in the US stock market, or even a big crash. In that scenario investors will flock to US treasuries as surely as Pavlov’s dog salivated when it heard the bell ring.

In short, a modest allocation to long-dated treasuries is included as a hedge against a big stock market sell off. One easy way to invest is via the iShares 20+ Year Treasury Bond ETF (NASDAQ:TLT). But if you’re still unhappy about owning any bonds you can just put 10% more into cash.

By the way, I was right to leave out these bonds when I made my recommendations almost a year ago. Treasury yields have risen and hence prices have fallen since then. The price of the TLT ETF dropped 9.5% in between.

I’ve left out all other bonds, since I don’t think they’re worth owning on the basis of prospective profit opportunity (or lack, thereof). Remember, the US treasuries are only really in there as a stock market crash hedge, and then under sufferance.

So there you are. My new recommendation for how to allocate your investments means that stocks are trimmed (even sensibly priced ones), cash stays high, there’s still a chunk of gold, and a few US treasury bonds are added to the mix for the first time.

That should weather most of scenarios that these complicated markets can thrown at us. It will also leave us well positioned to scoop up bargains as and when they arise.